Former register of deeds files to take back seat this year 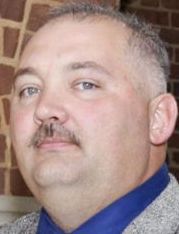 A former register of deeds currently working as a detective with the Rowan County Sheriff’s Office is running this year to take his seat back.
John Brindle, 41, filed as a Republican the first day the Board of Elections would let him and is challenging incumbent Harry Welch, who also is a Republican.
Brindle served as Rowan County Register of Deeds from 2008 to 2010. Before that, he had worked in the register of deeds office since 2004.
“I have worked as a public servant for almost eighteen years — six of those in the register of deeds office,” Brindle said. “Many cost-saving measures were implemented during the time I spent in the office, and there are many ideas and projects that have not yet been developed in the register of deeds office.”
Brindle is a member of First Baptist Church in Rockwell, Fulton Masonic Lodge 99 of Salisbury, Lions Club and a lifetime member of the National Rifle Association.
After graduating from Northwest Cabarrus High School, Brindle took classes in business law at Rowan-Cabarrus Community College.
Brindle went through basic law enforcement training before attaining a register of deeds certification as well as completing an advanced register of deeds course at the University of North Carolina-Chapel Hill’s School of Government.
“My goal is to serve the citizens of Rowan County efficiently and effectively in this office, and I am dedicated to the citizens of this county,” Brindle said. “I have proven my dedication to the citizens of this county many times during my career.”
For Brindle, public service means public trust — the trust that comes from his work ethic, dedication and ability to perform the job entrusted to him.
Public service also means being available to citizens during work hours and within reach in an emergency, Brindle said.
“I believe in leading by example, performing the day-to-day operations of this office and never asking anything of the staff that I could not or would not do myself,” Brindle said.
Brindle and his wife, Karen, have three sons, a daughter-in-law and two granddaughters.