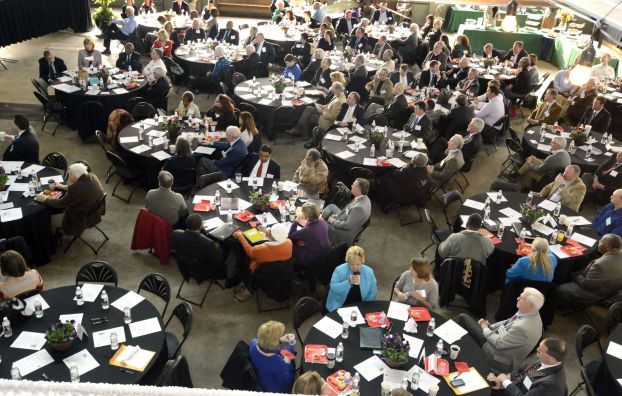 SALISBURY — In remarks Thursday, the Rowan County commission chairman opened a community forum by calling for restraint and accusing Salisbury of poor planning, while Salisbury’s mayor touted the city’s fiber-optic broadband network and well-traveled location in the Interstate 85 corridor.
Jim Sides, chairman of the Rowan County Board of Commissioners, said the day-long visioning process that drew more than 200 people to the F&M Trolley Barn “could be the answer we are all looking for” to boost the local economy.
Sides endorsed the forum and thanked F&M’s Paul Fisher for coming up with the concept and a recognition that Rowan County is underperforming and people are not cooperating, collaborating or playing together as a team.
“If we fail to plan, we plan to fail,” Sides said.
But Sides warned that planning can get out of control.
“When we sit down to plan the lives of others, especially those who are paying the bills, we need to exercise some restraint,” he said.
Planning for new sidewalks, greenways and other initiatives may fail to consider the desires of people who live in the affected communities, he said.
Rowan is the only county in a 15-county region that has declined to participate in the Carolina Thread Trail, a planned network of trails, sidewalks and conservation corridors in North and South Carolina.
Sides criticized Salisbury’s Vision 2020 comprehensive plan, the city’s strategic planning document. If the N.C. General Assembly had not changed the state’s annexation laws, Salisbury would have aggressively pursued annexation of every piece of property in Rowan County not already claimed, he said.
“That was poor planning by the city,” he said.
Sides called for people to work together to leave Rowan better than they found it and said he hoped results from the forum would “return joy to our citizens with the promise for a better future.”
Salisbury Mayor Paul Woodson did not address Sides’ criticism. Instead, he pointed out that Salisbury already has Fibrant up and running while Charlotte competes for a similar data network from Google Fiber.
“Sometimes we don’t get enough credit for going out five years ago and doing this,” Woodson said. “I’m proud as mayor to say I’m ahead of Charlotte.”
Woodson acknowledged that Fibrant has struggled but is now breaking even. The city borrowed $33 million to build the network.
Rowan County’s location along I-85 will eventually spur more development, Woodson said. More than 80,000 vehicles a day drive through the city and county, he said.
“One day, they are going to stop and say let’s put something in Salisbury, let’s put something in Rowan County,” Woodson said.
Like Sides, Woodson thanked Fisher for his vision and sponsorship of the forum and asked participants to look to the future.
Sides also mentioned unemployment, poverty, low median income, crime, gang-related activity and underperforming schools as disturbing demographic trends that paint a troubling picture for Rowan’s economy.
The forum continued today with small group breakout sessions and a panel discussion on education. Participants will gather tonight to vote on Rowan’s top three assets and issue a call to action.
Contact reporter Emily Ford at 704-797-4264.

SALISBURY — A day-long planning event to come up with a vision for Rowan County is sold out, and Paul... read more