Local artisans create award that was presented in D.C. 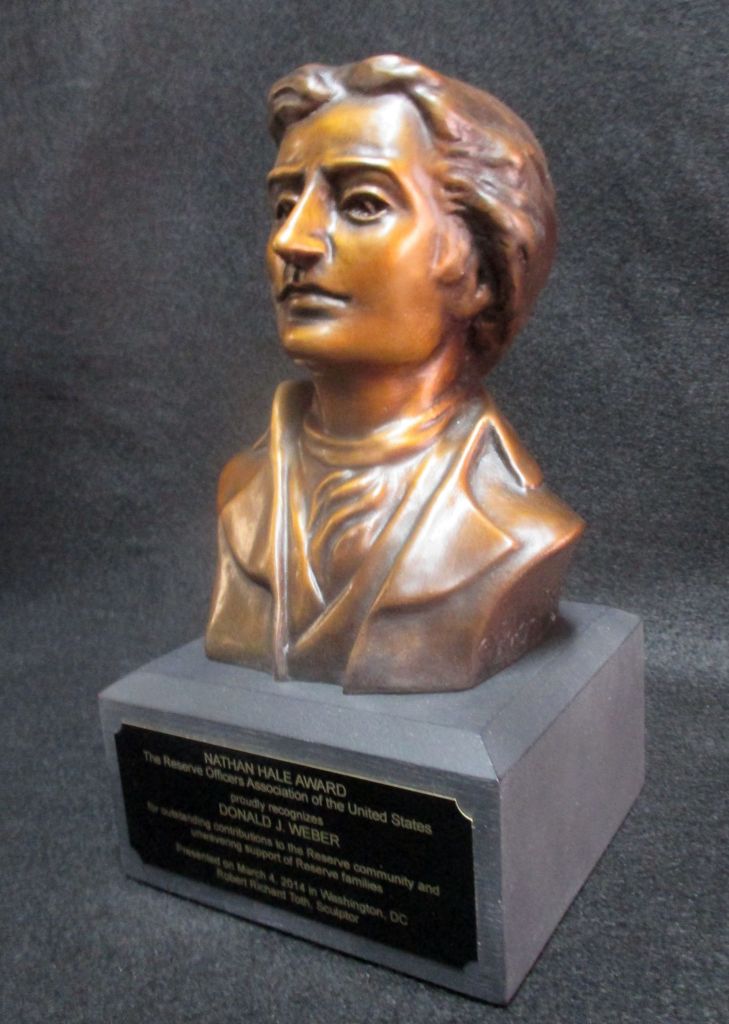 In Washington, D.C., on Tuesday night, Don Weber received the Nathan Hale Award from the Reserve Officers Association at their annual gala. A fine award, to be sure, but what makes it interesting is the fact that three Rowan County artisans had a hand in it.
Local sculptor Robert Toth received a commission from the organization to create a bust of Hale, a Revolutionary War soldier who famously said, “I only regret that I have but one life to give for my country.”
He made the award according to his client’s specifications. It is 9 inches total, with a 4-inch high base. That’s where Goodman Millwork comes into the picture.
Toth was referred to company owner Franco Goodman by Bruce Wilson, owner of Fine Frame Gallery in downtown Salisbury. Goodman and Wilson are neighbors.
Toth requested that Goodman make a 5-inch by 5-inch mahogany base.
“I was very intrigued by the fact that we have somebody like him living in Salisbury,” Goodman said Monday. “He’s a very interesting guy to talk to. He’s been recognized in a lot of big arenas, and this is one of them.”
The piece also needed a nameplate, and that’s where Luann Fesperman of the Trophy House in Salisbury comes in. She’s been working with Toth for years.
The nameplate reads: “Nathan Hale Award — The Reserve Officers Association of the United States proudly recognizes Donald J. Weber for outstanding contributions to the Reserve community and unwavering support of Reserve families. Presented on March 4, 2014 in Washington, DC. Robert Richard Toth, Sculptor.”
A Marine, Weber served in the Vietnam War, receiving a Purple Heart and two bronze stars. He owns a Wisconsin-based company that designs, implements and manages occupational health and wellness programs, and medical and dental readiness for government and commercial organizations.
Although there can be pressure associated with such a commission, Toth said, “I worked with responsible, proven professionals, who made it possible to get this job out on time.”
Everything came together well, Toth noted. Carolina Bronze in Seagrove cast the piece for him.
Over the years, Toth has created life-size busts, and has also produced 50 similar-sized pieces for the Edison Awards for the past four years. Those awards honor innovative new products, services and business leaders.
“This is bigger than the Academy Awards, in my opinion,” Toth said, the day after the Oscars show aired.
For more information, visit www.roberttothsculptor.com.