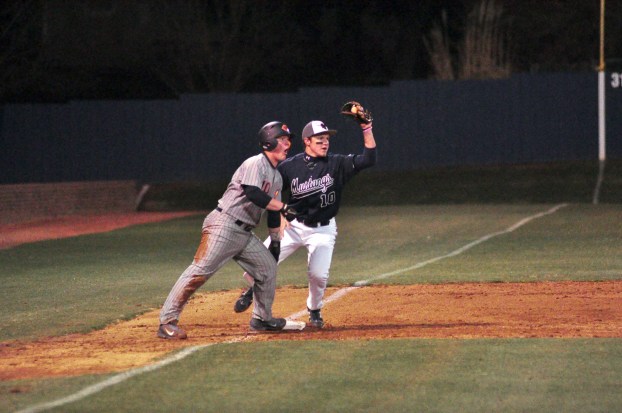 GRANITE QUARRY — The only person who would’ve had a chance to hit East Rowan’s Connor Johnson on Tuesday also was wearing a blue uniform.
That would be Luke Setzer.
Johnson fired a one-hitter with nine strikeouts and Setzer drove in four runs with a booming double and a no-doubt homer to lead East Rowan to a 5-0 win against rival Carson on Tuesday.
The SPC game was played at Staton Field in mid-30s temperatures, but the Mustangs (2-1) appeared to be in midseason form.
Johnson (2-0), apparently impervious to cold, wore short sleeves and pitched short innings. The senior lefty faced only three batters in the first, third, fourth, fifth and seventh, and two of those innings ended with ground-ball DPs.
“Connor was great, and I thought we played with a lot of confidence behind him,” East coach Brian Hightower said.
East got a quick run against Carson hurler Dillon Atwell (1-1) on two-out, first-inning doubles by Ike Freeman and Dustin Ritchie. Due to injuries, East didn’t have either of those guys for big chunks of the 2013 season, and that helps explain why the Mustangs were a disappointing 12-14 a year ago.
Setzer was pressed into duty as a catcher last season with Ritchie out, but with Ritchie back, Setzer is free to roam center field.
“Luke did a great job catching last season, but the outfield is where he’s comfortable,” Hightower said. “Now he can just worry about hitting — and he can hit. He had some great swings tonight, and he’ll go play somewhere.”
The top of the second was the pivotal half-inning for Carson. Bryson Prugh led off with a bloop single, a base hit that would be the only one Johnson allowed. Colton Laws followed with a grounder to third base that could’ve been a double play, but East third baseman Mason Doby slipped, and Carson had two on with none out.
Carson (2-1 SPC) hasn’t hit so far, so it was a bunting situation in the eyes of just about everyone in the ballpark, including Carson coach Chris Cauble.
But veteran Austin McNeill fouled off a sacrifice attempt, and then Johnson struck him out. After Ritchie threw out Prugh trying to steal third and Johnson struck out Ryan Bearden, the inning was over, and Johnson wouldn’t give the Cougars many more chances.
“East did the little things right tonight and we didn’t,” Cauble said. “Johnson is one of the best and you have to capitalize against him when you have chances. If we get a bunt down there, we probably get a run to make it 1-1, and it changes the game. But East kept the lead, and they did what a good team does — they hit the gas pedal.”
Setzer got to the plate with Freeman and Ritchie on base in the third and walloped a soaring double to the left-field fence to make it 3-0.
Then Setzer’s two-run homer in the sixth left the park in an awful hurry and put an exclamation point on the Mustangs’ chilly victory.
“You don’t expect the ball to travel very far on a cold night like this, but I didn’t over-think things and I had some pretty good at-bats,” Setzer said. “I got fastballs to hit and I let the bat-head fly. We all wanted to hit for Connor. When a guy’s pitching like that, you want to put some runs up for him.”
Seventh-ranked Carson, which won a 1-0, 11-inning SPC game with Central Cabarrus last week, only stroked one ball on the nose. John Daugherty, the 2013 county player of the year, smoked a liner in the fourth, but it headed right at East right fielder Ty Beck.
“I just felt good all night,” said Johnson, who had a career performance early last season when East won at Carson. “I guess I like weather like this. I had a good fastball and threw mostly fastballs. I did get a few strikeouts on curveballs (Ritchie made the plays on several strike threes in the dirt) and my defense was strong.”
It’s one game in a long season. East played great. Carson didn’t. The teams meet again Friday at Carson.
“East is ahead of us as far as hitting the ball,” Cauble said. “We’ve got a lot of work to do to close that gap before Friday.”

South Rowan’s Logan Durham was named the winner of the Dutch Meyer Award Winner, an award that annually goes to... read more