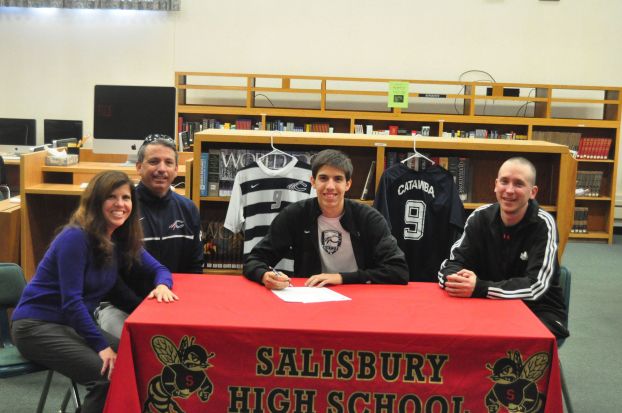 The men’s soccer program at Catawba has become a family affair for the Cardelle’s.
With Indian goalkeeper Frankie Cardelle graduating this spring after three seasons, another Cardelle is stepping in to fill the void. Bobby, a standout senior at Salisbury, signed his official letter of intent to Catawba last week in a signing ceremony, following in the footsteps of his brother and dad.
“Knowing that Frankie played there and did such a great job and going to games there for the last 12 or 13 years, I always kind of knew I would end up at Catawba,” Bobby said, surrounded by family and friends in the Salisbury media center. “It really feels like home to me.
“Signing is an unexplainable feeling,” he continued. “I always thought I would be playing soccer in college but you never really expect it to happen until it does. Now it’s just ‘Wow, I’m going to be a college soccer player.’”
Dad, Frank, is entering his 14th season as an assistant coach with the Indians, which was a big factor in Bobby’s decision to sign.
“My dad being there was a really big influence,” he explained. “I’ve played under him on club teams before, but this will be a completely different experience since it is at the college level. “I think it’ll be fun. He’ll really push me and try to make me a better player.
“He’ll probably yell at me more than everybody else,” Bobby joked. “But only because he wants me to get better.”
Bobby heads down the road to Catawba as one of the most decorated players in school history with the Hornets.
The senior captured two state championships in his final three seasons, including scoring the winning goal of the title match last fall, while earning all-state recognition each of the past two years. The two-time Rowan County Player of the Year also broke the 100-goal plateau.
“Everything seemed to work out really well with the group of players that we had here. We had great teams my sophomore and senior years to win the state championship,” he reminisced. “As for my personal accomplishments, I was trying to help out my team. They believed in me and I believed in myself. The personal stuff came after that.
“Individually, probably my 100th goal against Statesville in the playoffs was my best memory. Even coming into high school, I never thought I would score that many goals.”
Bobby’s prolific scoring can undoubtedly be traced back to his brother, who stopped 53 shots last year as the primary goalkeeper for the Indians.
“He definitely was a big part in my being the position I am and me scoring goals the way I do,” he explained. “Anytime I would go play with him, I would make it my mission to score as many times as I could on him. He always tried to get me better.”
Salisbury head soccer coach Matt Parrish believes that competitive edge will bode will for Bobby at the next level.
“When you come from a family that has originated in soccer from the youth leagues his dad has started to an all-state older brother, in some part it’s in your bloodline,” he said. “You’ve obviously been trained from a very young age.
“But after the talent comes the work, and that’s the best thing I can say about Bobby ­— he’s put in the time,” Parrish continued. “I’ve never had a player in any regard or in any sport that is as acclimated to his particular sport as Bobby. He watches soccer, he plays soccer, he plays soccer video games…it’s soccer, soccer, soccer. He’s taken what he’s been given and has added to that with all his hard work and dedicated.”
While he will need to bulk up from “135 or 140 pounds sopping wet,” Parrish expects Bobby to make an impact with the Indians.
“When it’s all said and done, his on-the-ball skills in any system are solid enough that he’s going to make an impact at some point in time. It might not be right off the bat, but he’s going to see the field and he’s going to make an impact, and it’s going to be sooner rather than later.”
But the Cardelle’s might not be finished with the college signings.
As Bobby replaces Frankie at Catawba, younger sister Ceci will look to fill the enormous shoes left by her brothers at Salisbury on the girls squad.
“The next Cardelle has come,” Parrish warned. “Ceci Cardelle has been lights-out so far for the girls team. So hopefully in three or four years we’ll be right back in the same spot ready to go again.”

South Rowan’s Logan Durham was named the winner of the Dutch Meyer Award Winner, an award that annually goes to... read more