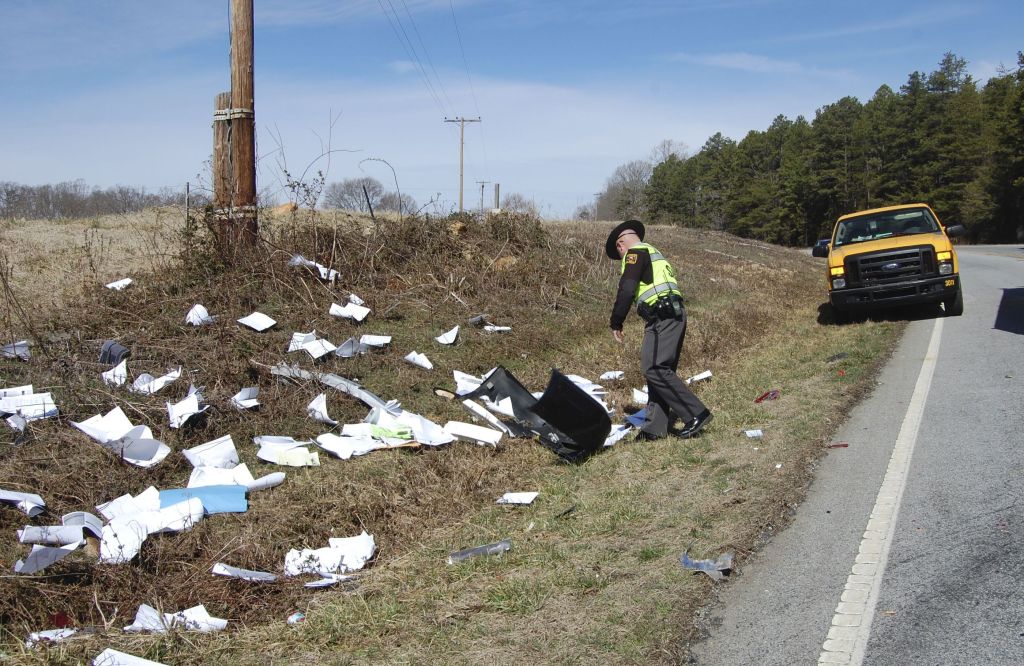 N.C. Highway Patrol troopers aren’t sure what caused Livingstone College administrator Melissa Rivers to cross into the path of a school bus Tuesday morning along Woodleaf Road.
Rivers, 40, director of career services, was traveling south on Woodleaf Road and the Rowan-Salisbury school bus was traveling north. Trooper B.P. Potts said Rivers, of Salisbury, was driving a 2013 Infiniti, left the roadway and traveled into the opposite lane. She tried to swerve, but clipped the bus.
The bus driver, Gloria Mesimer-Koontz, 62, of Woodleaf, also tried to avoid hitting the car by swerving onto the shoulder, Potts said, but was unable to move in time.
The wreck happened shortly before 10 a.m. in the 2500 block of Woodleaf Road between the West Ridge Road and Holly Leaf apartments.
The rear of Rivers’ vehicle struck the front of the school bus, causing the car to spin and run off the shoulder. Rivers’ vehicle hit a fence and came to rest in a field.
“We don’t know if she had a medical condition or wasn’t paying attention,” Potts said.
Rivers was not wearing a seatbelt, but was not ejected from the car. The front and side airbags did deploy, he said.
She was taken to Novant Health Rowan Medical Center and later flown to Wake Forest Baptist Medical Center where hospital officials say she is in stable condition.
Excessive speed was not a factor, the trooper said. He estimates Rivers was traveling about 60 mph. The speed limit on that stretch of road is 55 mph.
Rivers suffered a “critical” head injury, a first responder said. She was found unresponsive. EMS took her to Rowan Medical Center where a helicopter was waiting.
Six students on the bus complained of pain, but only one student, 9-year-old Camdon Blakely, was taken to Novant Health Rowan Medical Center with neck pain. There were 28 students on the bus, a fourth-grade class returning to Woodleaf Elementary School from a play at the Norvell Theater, said Rowan-Salisbury school spokeswoman Rita Foil.
The other students on the bus were OK. One-by-one the students boarded another bus that took them back to Woodleaf Elementary School. There were three adults on the bus, including the bus driver, Foil said.
“This is absolutely the phone call you never, ever want to get, is that there’s been an accident. I think sometimes we have to look at the fact that these kids are on a big, huge, yellow bus, which in some ways is just a very safe place for them to be,” Foil said.
The bus sustained heavy damage to the front end. Emergency responders asked for another bus to come and take the students away.
The back of Rivers’ vehicle sustained considerable damage while the driver’s side and front had virtually none. The contents of Rivers’ car including papers with Livingstone College letterhead and personal items like a scarf and boots littered the side of the roadway. A bumper, tire and muffler were strewn in the field yards from where the vehicle settled. Rivers has been at Livingstone College for less than three years.
Woodleaf Fire Department also responded along with NuCare Carolina Ambulance, Rowan EMS, Rowan County Emergency Services, and the school system’s transportation department towed the bus.
Contact reporter Shavonne Potts at 704-797-4253.