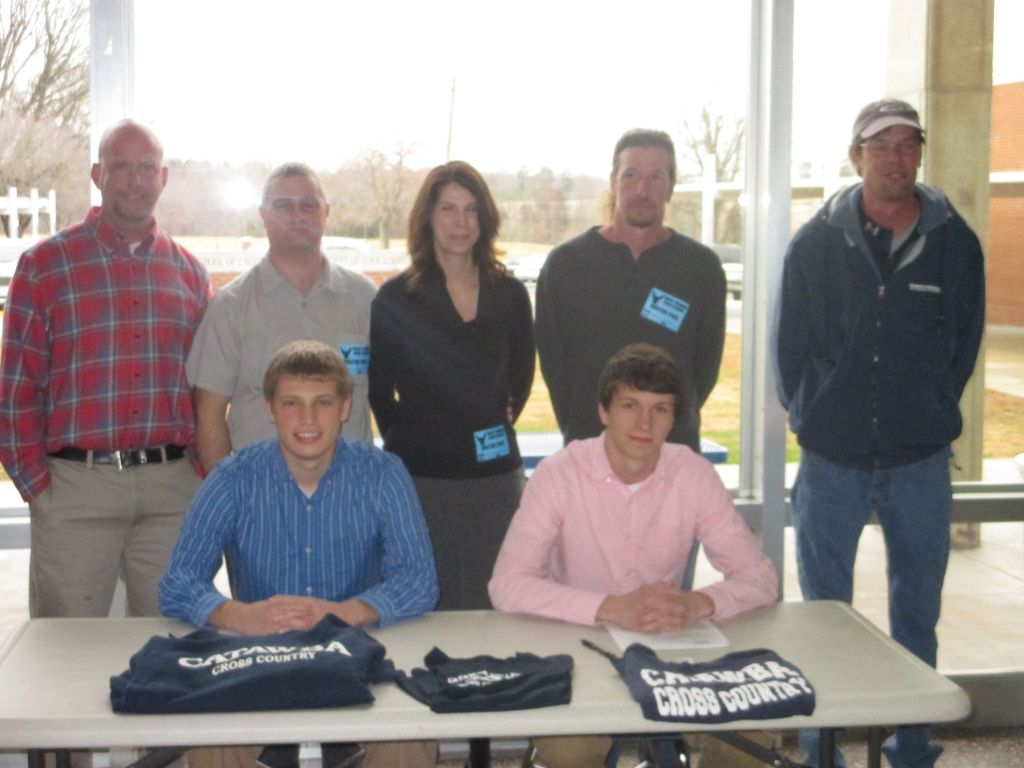 MOUNT ULLA — West Rowan senior Clay Cranford’s cross country debut came as a freshman in the Pre-Rowan County Meet.
Cranford’s clocking that afternoon of 31-something is the sort of time that might ordinarily encourage retirement from cross country, but Cranford was motivated rather than devastated. His career is still moving forward and is a study in perseverance.
Cranford has improved so much — his times are in the 18s now — that he signed a Catawba scholarship last week along with West teammmate and friend Dakota Goodson.
“What Clay did should inspire all our runners here,” West coach Scott Foster said. “He won our team Falcon Award for leadership, and he’s a good example for our young guys. Here’s a guy who worked his way to a scholarship.”
Cranford initially believed his best chance to impact West’s varsity sports was going to be on the golf team.
“I had about zero natural talent for running,” Cranford said with a chuckle. “But I live close to the course at Salisbury Community Park, and my house was a place for the cross country runners to park their cars after hours. So they kept trying to talk me into coming out for the team.”
His teammmates got him on the course, and his times have been coming down due to added maturity and a non-stop work ethic. As a junior, he got serious enough about running to compete on the track team.
“Mostly, Clay has just put in the miles,” Foster said. “I remember a day when had cross country practice for about an hour at West, and then I was at the park later that night and saw him come running by. He must have gone home and rested an hour and then started running again. That’s a lot of dedication, and it’s why he’s cut 13 minutes off his time in three years. He told me that it’s not much funning getting in shape, but once you get there, it’s a great feeling.”
At the 3A Midwest Regional held at Charlotte’s McAlpine Greenway last October, Cranford finished in a cluster of West runners at 18:58. That time allowed him to beat his friend Rebecca Parker, West’s Division I-signee female, for the first time. There were some bragging rights involved in that, and both the Georgia Southern-bound Parker and Cranford mentioned that moment at the signing party he shared with Goodson.
“It’s just fun being able to compete,” Cranford said. “At first, I was just wanted to finish. Now I’m in a race.”
Both Foster and Cranford believe he’s better suited for college 8Ks than the 5K high school distance.
“I’m a lot more of an endurance guy than a speed guy,” Cranford said. “The longer the race, the better. You get out of running what you put into it, and I’m going to give it all I have in college.”
Goodson is best known at West for his work on the wrestling mat and recently was a regional qualifier at 132 pounds.
He was attracted by cross country, as you might expect, simply as a way to elevate his endurance, stay in shape and keep his weight down in the fall prior to the winter wrestling season.
“Coach Foster asked me about trying it, and I figured why not,” Goodson said.
Foster remembers Goodson’s first summer day with the team prior to his junior year. It was at least as unpromising as Cranford’s debut meet.
“It was hot, it was humid, we went about four miles, and Dakota really struggled,” Foster said. “The next day we didn’t see him, and then we didn’t see him the day after that. I thought that we’d run him off.”
That wasn’t the case.
Goodson helps his father with construction work and was out of town at a job site. But when he returned, he was ready for another crack at a cross country workout.
Goodson’s early times were in the 25s, but he was running 21s last fall, so he’s headed in the right direction. He’s a good athlete, so he should continue making strides.
Goodson and Cranford both will run track for West this spring, probably 1600s and 4×400 relays.
“I was going to go to Catawba for the business management program, and I was thinking about walking on for cross country,” Goodson said. “But then this (scholarship money) came around. Who would have thought that would happen after running for a year?”