Indian made easy with Brian Pfaff 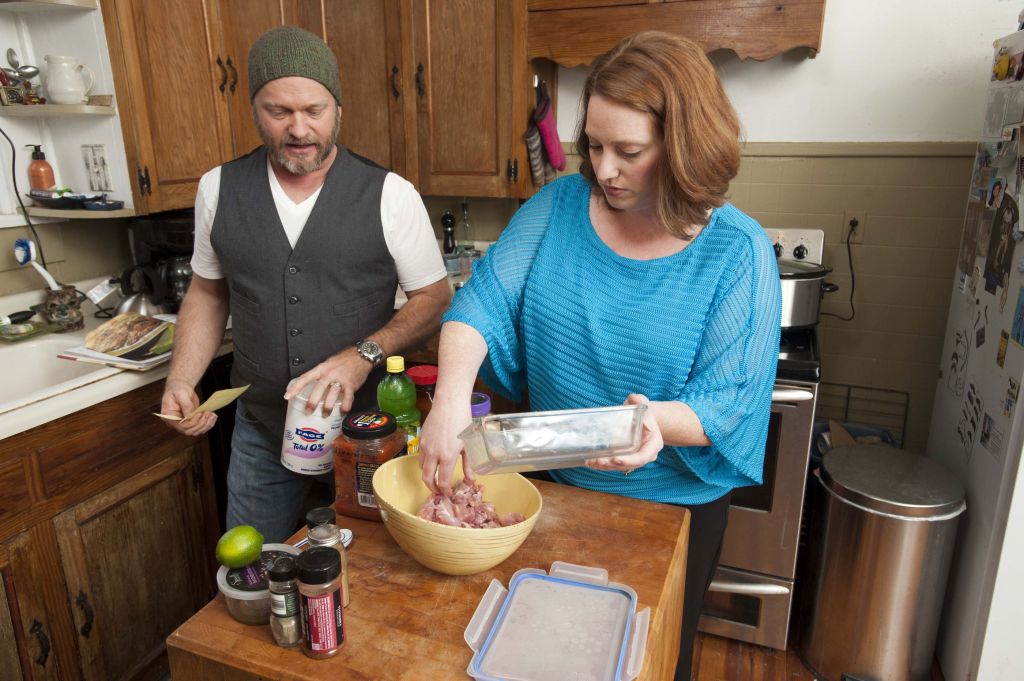 It is pretty likely you know Brian Pfaff. He is quite the local personality and Renaissance man. He is a foodie, wine enthusiast, craftsman of fine carpentry and design, and overall awesome guy. Brian and his lovely wife, Jenni, owner of Green Goat Gallery in Spencer, kindly invited me to crash their kitchen.

When I arrived at their beautiful home on the edge of downtown Salisbury, I had no idea what was in store. As of late, Brian has taken quite a liking to and fascination with Indian food. As Jenni flitted through the kitchen, she exclaimed, “Salisbury really needs an Indian restaurant!”

They have been making their way through a cookbook, Hamlyn’s “Complete Indian.” And we were going to make one of their favorite recipes, Chicken Tikka Masala.

It is an easy recipe, and when you taste it, you can’t believe just how easy it was to make. Whether you love Chicken Tikka Masala, or if you are like me and have never had it before, it is a delightful meal.

Many years ago, I was fortunate enough to travel to London with my best friend. One of the many wonderful restaurants we dined in was an Indian restaurant. I have no idea what we ate. I remember eating curry-like substances and sharing Naan and unidentifiable condiments that ranged from sweet to minty to utterly fire-like.

Indians take their food very seriously, I have learned. Cooking is considered an art form, and recipes are passed down generation to generation. There is great diversity in Indian food, but the common thread that runs through most recipes is the use of aromatic and flavorful spices.

I am open to trying new foods, but cooking them is another story. Indian food is so exotic and rich that it can seem intimidating when attempting to cook it. But Brian was quite enthusiastic, and he assured me that this recipe was not difficult.

The key to cooking Indian food, according to Brian, is to assemble all of the ingredients before you even begin cooking. Having everything all in one place makes things in the kitchen much, much easier.

There are two different ways to make Chicken Tikka Masala: in a slow cooker or marinated and grilled. We were making the slow cooker version. When I got to Brian and Jenni’s home, all the ingredients were already set out on the butcher block for us to begin. It is a good-sized ingredient list.

We started by dumping ingredients into a bowl, but you can just put it all in a slow cooker all at once.

We began with one pound of chicken, cubed. We used thigh meat because that was what Brian had on hand, but feel free to use the cut of your choice. We then loaded everything into the bowl: plain yogurt (we used Greek), ground ginger, minced garlic, chili powder, coriander seeds and lemon juice.

The recipe calls for olive oil, but Brian had a trick that he likes to use. He keeps the olive oil juice from marinated olives. It is packed with flavor, so we used that in place of standard olive oil. The recipe also calls for a small onion and tomato paste. Brian had yet another trick up his sleeve: we used salsa. Yes, salsa in Indian food.

We then added ground cardamom and garam masala, which I am convinced is that distinct smell that Indian food has. We then sprinkled the glob of ingredients with seasoned salt. We stirred it all together, tossed it into a slow cooker, and poured heavy cream over the mixture until covered.

We set the slow cooker on low for four to six hours. Brian was kind enough to have made a batch ahead of time so that we could try it.

We poured the steaming Chicken Tikka Masala over a bed of cooked Basmati rice, garnished with lime wedges and sprinkled with cilantro.

It looked so beautiful, particularly in the colorful serving dishes we used. We had a little too much fun when we sat down at their grand dining room table to try the delightful looking dish.

The dish was flavorful, rich and incredibly satisfying, not to mention the way it made the house smell heavenly.

There is a lot going on in this recipe, but it is hearty and savory, and enough to feed a family of five. It does feel pretty good that even I can make something that tastes so exotic, particularly because it really is that easy!

The Green Goat Gallery in Spencer is hosting a show titled “Magnified Heart” through March 9. All pieces are 5×7 and under and original. Over 20 artists, from the Goat, Monday Rembrandts, Carolina Artists and more are represented. For more information about the Green Goat Gallery, visit www.GreenGoatGallery.com.