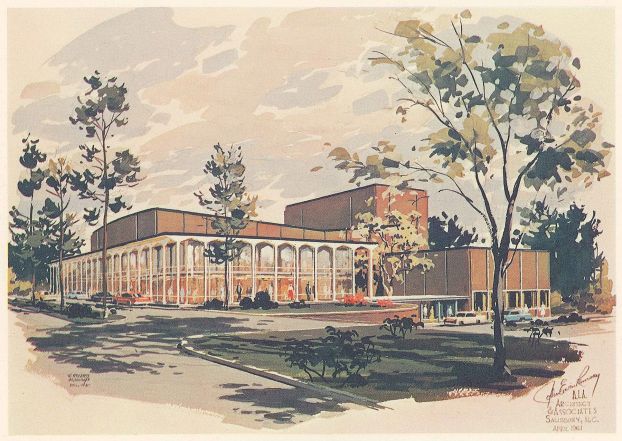 If the walls of the Robertson College-Community Center on Catawba College’s campus could talk, they’d tell of laughter, tears, music, celebration and the staged and real comedies and tragedies that have occurred over the past half century in the campus and Rowan-Salisbury communities.

The much-used Community Center, like the Omwake-Dearborn Chapel on Catawba’s campus, marks its 50th anniversary this year. The occasion is a reminder of how connected the college is to the broader community and just how a town-gown relationship is nurtured.

Catawba College President Brien Lewis said the two buildings are “part of the lifeblood of the college and larger community” and their anniversaries serve as a reminder of “how intertwined” these communities are.

The Community Center continues to be the setting for graduations, symphony performances, theatrical offerings, concerts, candidate forums, symposia and inaugurations.

Catawba’s 14th president, Dr. A.R. Keppel, dreamed of a new chapel and an auditorium on Catawba’s campus, and Catawba’s 15th president, Dr. Donald Dearborn, inherited these two unfinished projects when he took office in 1963. Both were under construction and neither was fully funded. Dearborn’s task was to find adequate funds to finance the construction and see the dream realized.

When fundraising began in 1961, college officials sought to raise $600,000 to erect a facility with an auditorium and a little theater. James F. Hurley, III, whose family owned and published The Salisbury Post, wrote to Catawba trustees urging them to approve a program to build an auditorium that would serve both college and community. He said his newspaper would support such a project, both financially and in providing publicity. The then executive director of the Salisbury-Rowan County Chamber of Commerce also weighed in, supporting the idea and committing the chamber’s efforts to ensure this project’s success.

In February, 1961, college trustees authorized the building committee of the board to seek bids for the proposed College-Community Building and instructed Keppel and that committee to engage the John Ramsay and Associates architectural firm of Salisbury to draw plans for the structure. Under Keppel’s leadership, and with the help of almost 250 Salisbury and Rowan citizens, $615,699.85 was raised for construction. R.K. Stewart & Son was the low bidder for the college-community building with a price of $687,018 and was awarded the construction contract.

On March 2, 1964, a two-week long fine arts festival began to mark the formal opening of the college-community center. A brief ceremony of dedication preceded the opening night performance by the Detroit Symphony Orchestra.

Attending the ceremony were the architect, trustees, Keppel — for whom the large auditorium was named in appreciation for his efforts to begin the project — and the three daughters of Mr. and Mrs. B.V. Hedrick — for whom the Little Theatre was named. Also on hand was Dr. Tom Thurston, then president of the Salisbury-Rowan County Chamber and general chairman of the fund drive that raised over $600,000 in Rowan County and Salisbury for the facility.

The building’s Crystal Lounge venue, surrounded on three sides by floor-to-ceiling glass windows, would host seated dinners and receptions and would eventually be named Peeler Crystal Lounge in honor of Clifford A. Peeler, son of the founder of Cheerwine and a longtime Catawba trustee.

Dr. Hoyt McCachren, now a Catawba professor emeritus of theater arts, was on the faculty during the college-community center fundraising and construction. He remembers the excitement that surrounded this project “that had been talked about for a number of years.”

McCachren was involved in the design of the center, working with the architect and Horace Robinson, a theater consultant from the University of Oregon, to finalize details of the theater. When the college-community center opened, McCachren’s “Romeo and Juliet” was staged as the opening production for Hedrick Little Theatre. The first Catawba-produced, large-scale theater production on Keppel stage occurred in December 1964 with “My Fair Lady.”

McCachren said college theater and musical performances had been performed in a 300-seat venue in the Hedrick Administration Building prior to the construction of the center. That same space had also been used for the college’s mandatory, three-times-a-week chapel services.

“When the new college-community center opened, it made growth in Catawba’s theater arts program possible. That growth allowed us to become one of the leading undergraduate theater arts programs in the country,” he said, noting the new facility role in recruiting students.

After the opening, McCachren was named director of center activities, and all bookings for spaces in the venue went through his office.

“When it first opened, Dr. Dearborn put a certain amount in the budget for us to bring in outside groups so folks in the community could get a feel for the things that could be done in these spaces,” he said. “That lasted a couple of years and thereafter, the bookings came in on their own. Piedmont Players moved in immediately after it opened and we shared the space in Hedrick with them for a number of years.”

In the early 1990s, the college-community center was named in honor of Salisbury’s prominent Robertson family and in recognition of Catawba trustee Julian Robertson Jr.’s generosity.

The Robertson College-Community Center remains a flagship building on Catawba’s campus, 50 years after it opened. Requests for bookings in its spaces come frequently to the Catawba Conferences office and the college-community center continues to see use from both the college and the community.

Catawba’s annual graduation ceremonies, as well as the graduation ceremonies for several high schools in the Rowan-Salisbury School System, are held there. A number of Salisbury Symphony and N.C. Symphony performances are scheduled annually, along with lectures and symposia. Lectures, luncheons, receptions and seated dinners are frequently scheduled in Peeler Crystal Lounge.

Some significant changes have occurred in the building to make it more user friendly. Seating in the college-community center has been updated several times since 1964. Today, the facility is handicapped-accessible with ramps installed at the front of the building to allow ease of access into all three venues in the space. Adding handicap seating in Keppel Auditorium changed the original seating capacity from the 1,500-capacity touted in 1964 to the current 1,445. Some structural and technical improvements have also occurred. The columns at the college-community center have been replaced, as have the lighting and sound systems.

Your daily look at late-breaking news, upcoming events and the stories that will be talked about today: 1. OUTRAGE FOLLOWS... read more