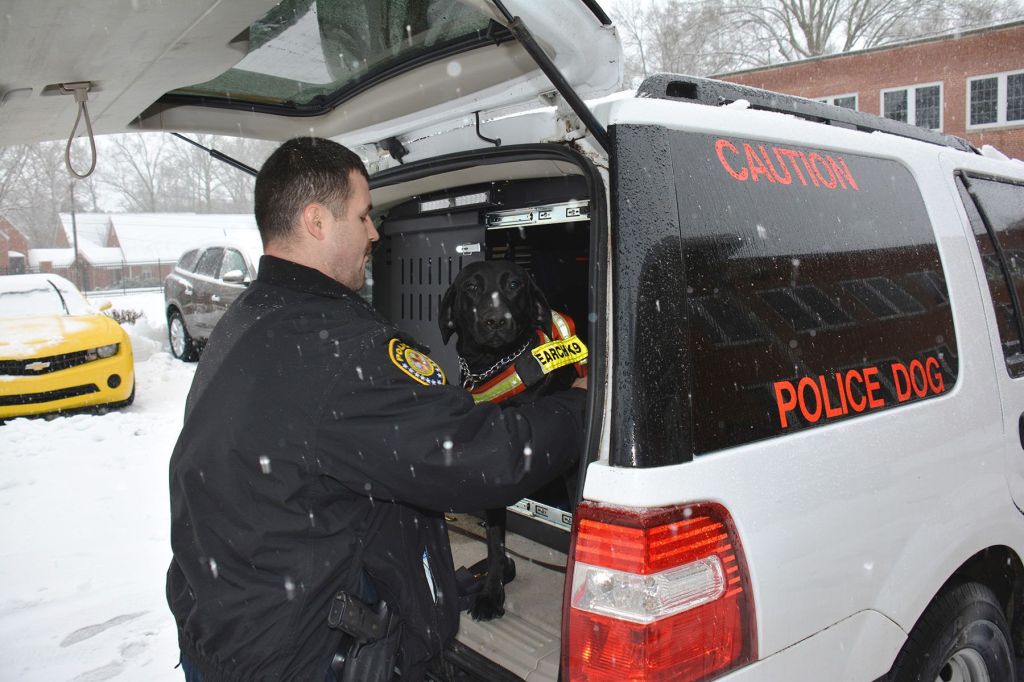 SALISBURY – Special jobs sometimes take special tools to accomplish. A new officer on the Salisbury VA Medical Center (VAMC) Police Department is bringing new tools to the force no one else can — in this case — a nose for trouble.
Canine Officer Storm, a 2-year-old black Labrador retriever, recently joined the force to be used to track individuals and illegal narcotics. Storm, who is trained in searching for people and narcotics, has already been successful in both respects in the few short months she’s been on the job.
Cpl. Travis Nellis, a canine handler and police officer for the Salisbury VAMC, said Storm was recently called in to find a patient who had left his ward without his needed oxygen.
“He left Building 2 and he forgot his oxygen. It was also a 15-degree weather day outside, and he didn’t have any warm gear,” Nellis said. “We gave her a pillowcase he had used to get his scent. She went to the elevator and we checked every floor, then went outside and we later found him in Building 6. That was the first time that she had a ‘live’ track, and to be honest, we were amazed at how she found the veteran because there are 1,500 people around here.”
Officer Jonathan Smith, a VAMC policeman, said he thinks Storm has already proven her value on the VA team as a result of her actions. Smith noted that cases like this show just how sensitive, and useful, a dog’s sense of smell can be to the police force.
“If a person smells a cupcake, that’s all we smell, a cupcake; the dog smells the sugar, the flour, the eggs, all of the ingredients in the cupcake. That’s why if we give her someone’s scarf, she can pick them out of 100 people based on her ability to differentiate scent,” he said.
Nellis also commended his partner for recently taking action on her own and telling him they were in the presence of an illegal substance.
“I had seen some people in Building 6 in an area they shouldn’t have been after hours. When they saw me and her come around the corner, they were nudging each other like, ‘Hey, let’s get out of here.’ So I stopped them and asked them if they needed some help,” he explained. “They said they didn’t, and they were heading to Building 4.”
“We walked up there later while making rounds, and as soon as we came in the door, she made a hard left, sniffed around at the guy’s pocket area, and sat down. So to be fair, I pulled her back out and went down the hall, I reinitiated her and she sniffed and went right back to where she was,” explained Nellis. “It was a small amount of marijuana, but it showed she knows her job.”
Surprisingly, work and play can go hand-in-hand for Storm, at least when it comes to training.
“When you train a dog for narcotics and human tracking, you find an object they are the craziest about, whether it’s a ball, a towel or a rag, and you get the narcotics odor on it and start hiding it,” explained Smith. “Then, when they find it, you have them sit and stare at the object, but reward them with a toy of the same kind. So eventually, they have no idea they are looking for narcotics, they are just looking for their toy. Once they learn that, you can use that skill to track scents to track people as well.”
Nellis said Storm is also working out well in the arena of public relations.
“We make our rounds around the hospital, not so much looking for narcotics, but as a community policing tool and deterrence factor,” he said. “The patients love her, so it’s good for her and them to help break the mundane. She pretty much loves everybody and they love her, so we’re not just the bad guys to some people.”
And he added, people are starting to notice when she isn’t with him.
“Normally, when I am out on a call, I will put her in the vehicle if it’s a disturbance that could involve violence. That’s when people ask me, ‘Where’s your girlfriend?’ or ‘Where’s the dog?’” he said. “They like to see her out and about, so we try to make her as visible as possible.”
It may be a working dog’s life for Officer Storm, but at the end of the day it’s worth it, said Nellis.
“Her primary search and narcotics skills are good, but when it comes down to it, we’re here to save veterans lives — that’s what she’s here for,” he said.