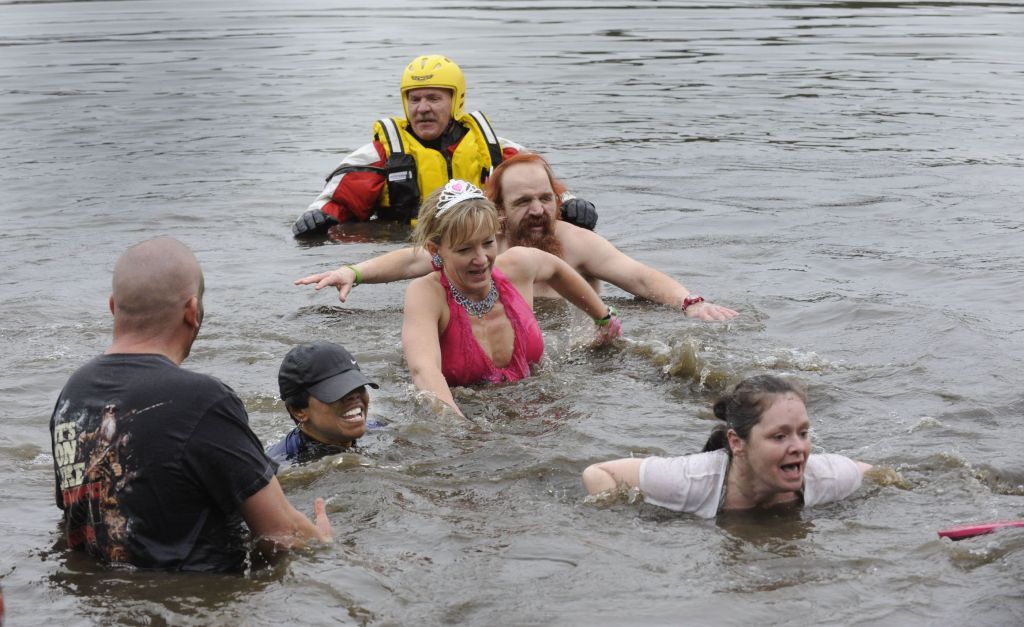 LANDIS — It was 33 degrees and cloudy Saturday morning at Lake Corriher. The water was maybe five degrees warmer — not that it mattered much.
The perfect morning for a swim? Hardly.
But a perfect morning for locals to do something cool (pun intended) to benefit the Rowan County Special Olympics.
The first-ever Polar Plunge in Rowan County raised over $3,500 for the local charity.
Just after 10 a.m., a group gathered on a boat ramp plunged into the water, going out about 20 yards before returning to shore.
It was a frigid plunge, but the participants — 25 in all, including kids — were a lighthearted crew.
Some even had on costumes.
Nicholas Jacobs, 9, came dressed as Darth Vader.
“It was terrible!” Jacobs said, still grinning a bit, after he’d come out of the water, changed into dry clothes and bundled himself up in a coat.
His mom, Nekita Eubanks, also took the plunge. “I felt like I was trapped under ice in the Ice Age, and I couldn’t get out!” Eubanks said.
Joseph Earl Levy III, 9, went into the water as a dolphin, the mascot of Sacred Heart School.
“I thought it was pretty fun,” Levy said. Family members said he raised $470 at his school.
Jenny Buchanan, volunteer with the Special Olympics, said the event has been well-received. Some swimmers came out who hadn’t preregistered, but just wanted to be involved.
Buchanan — who went into the water in princess garb, complete with a tiara to match her pink swimsuit — said volunteers and sponsors had made the first-time event a success.
Rowan County sheriff’s deputies, the Sheriff’s Dept. Explorer post, Landis Fire and Rowan County Rescue Squad personnel were among the volunteers who provided safety support.
Rescue Squad divers acted as lifeguards during the brief swim.
Nancy Collins, interim coordinator of the Rowan County Special Olympics, said a lot of work has gone into planning the Polar Plunge.
Numerous other communities hold Polar Plunge events to benefit Special Olympics, Collins said — so much so, that the name Polar Plunge is trademarked, she said.
Jay Taylor, of Mooresville, brought the idea to Rowan County after participating in one such event last year in Iredell County,
Taylor, who teaches students with intellectual disabilities at Rowan-Cabarrus Community College, said jumping into freezing water for charity takes some mental preparation.
“It’s just sensory overload, basically,” Taylor said. “Everything in your system tells you to get out, stop.”
At the same time, Taylor said, he was helping a Special Olympics athlete who came to the event and took part in the short swim.
That, Taylor said, helped him to ignore the cold.
Proceeds from the Polar Plunge will help cover costs of training and travel to Special Olympics events.
Since athletes aren’t made to pay in order to compete, fundraisers help cover those costs, said Detective Billy Basinger, Special Olympics coordinator with the Rowan County Sheriff’s Office.
“It takes a big, huge, tender heart to do this for athletes who would not get the chance to compete,” Basinger said.
After everyone dried off and changed, there was a bonfire with fresh hot dogs and barbecue chicken, plus coffee and hot chocolate.
Out by the fire, Leanne Jernigan, whose daughter Jennifer is a Special Olympics athlete, said they both enjoyed the cold plunge.
“It made me proud,” Leanne said, to be a part of the event. She said Jennifer competes in track and field, volleyball and bowling events.
Turning to her daughter, she asked, “Jennifer, were you scared?”
“No,” Jennifer said. When asked if she thought it was cold, Jennifer waved her hand dismissively.
There were prizes for costumes, and for the organizations who had brought the most “polar plungers.”
The real reward, said Principal David Miller, of Rowan County Early College High School, was getting to support Special Olympics.
“It’s obviously a great organization. It’s a great effort to raise money,” said Miller, whose school contributed $300 toward the goal.
The students’ reward? Getting to see photos of Miller as he hit the freezing lake.
“I’ve already been told … I’ll be on Facebook and everything else,” Miller said.
A small price to pay, maybe, for a good cause.
Contact Hugh Fisher via the editor’s desk at 704-797-4244.