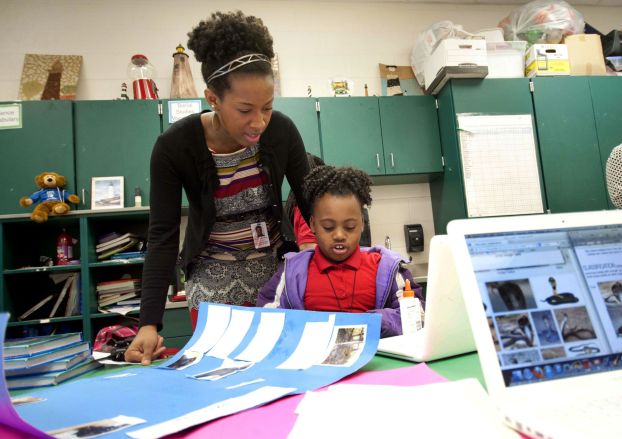 Mary Hemphill is a natural leader, having filled a number of leadership roles throughout her life, not the least of which is principal at Elizabeth Duncan Koontz Elementary School.

The 30-year-old has already been a third-grade teacher and an assistant principal. She became the principal at Koontz in July.

Hemphill grew up in Hickory. She always loved school, but it was in a third-grade classroom at Southwest Elementary School that she realized that she wanted to be a teacher. She credits her own teacher, Ms. Melvin with the desire.

“She connected to me as a learner,” Hemphill said.

When she went to high school, she excelled in Spanish. Hemphill took all the classes her school offered, so she found herself teaching a Spanish class at her high school her senior year.

During her junior year, she found out about N.C. Teaching Fellows, a program that recruits high-achieving high school graduates into the teaching profession by paying for their college education in exchange for four years of service in a North Carolina public school after graduation.

Hemphill applied and was accepted.

The fellows are required to attend one of nearly 20 predetermined colleges in the state, so Hemphill spent some time trying to decide between her options.

“When I stepped on Meredith College’s campus, I absolutely fell in love with it,” she said.

College is “to reinvent yourself, but to also step into that thing that you’re going to be for the rest of your life — to find your purpose.”

Hemphill did just that. Her freshman year, she was elected class president, and she decided to major in Spanish in addition to education.

Her sophomore year, Hemphill was able to study abroad in San Juan, Puerto Rico, at the Universidad de Sagrado Corazon.

“I was immersed in the language,” she said.

Her roommate was a Spanish-speaker, and she didn’t come home for an entire year.

In addition to language skills, Hemphill also said she learned many other valuable lessons.

When she came back to Meredith, she ran for senate chair in the school’s student government and won.

The following year, Hemphill took a “leap of faith” and ran for student body president.

Her campaign tactics were pretty sweet. She baked 600 cookies and had teams of two from each class level, each wearing a T-shirt with her campaign slogan, pass out the cookies in their classes.

Hemphill won and was named the 100th student body president at Meredith College. She was also the second African American to be elected to the position in the college’s history.

Hemphill said her presidency took place during a time when Meredith was a predominately white student body population, but she didn’t feel her race was the focus.

“It wasn’t even about the color lines,” she said. “It was about bringing everyone together.”

The important thing was embodying the philosophy of “I am a woman and I want to be successful,” she said.

During that year, all of the living presidents were invited back to Meredith for its centennial celebration.

Hemphill said it was a “powerful experience” to gather together with all the women who had come before her.

“It was phenomenal,” she said.

When Hemphill graduated, she moved back to Hickory to teach third grade. Not only did she accept a position at the very elementary school she attended, but she was also in the same third-grade classroom.

Her teacher, Ms. Melvin was retiring and she left everything — teaching supplies, books and decorations — for her. In fact, she specifically requested that Hemphill take her place.

“It was almost like the passing of a torch in a way,” Hemphill said.

“I will never fill her stilettos,” Hemphill added, but she worked hard to keep Ms. Melvin’s legacy alive of putting students first.

“It’s about the connectedness of teaching and the passion of teaching,” she said.

During her five years at Southwest Elementary, Hemphill was able to mentor and work with beginning teachers.

She also decided to continue her education.

The professors were amazing, Hemphill said. “They just taught me so much about the other side of school, and that’s the adult side.”

After Hemphill received her master’s degree in 2010, she accepted a position as assistant principal of curriculum and instruction at Statesville High School in Statesville.

“I decided I wanted to go into administration,” she said.

The change was a “huge, huge jump,” she said.

Her new school had 89 teachers and 14,000 students. For the first time, Hemphill delved into the world of college prep, extracurricular activities and sports.

“The kids are bigger, they’re much bigger, and they deal with some bigger issues,” she said, but added that they still need the same things, just on a different level.

Hemphill said she enjoyed using college essays, SAT prep and other college preparations to help implement her love of school in students.

While at Statesville High School, she also began working on her doctorate degree in leadership studies with a concentration in education from N.C. A&T University.

“Because it’s an interdisciplinary program, I’m not just with educators and I love that,” Hemphill said.

She said that she’s not just preparing her students to be educators, she’s preparing them to pursue all different careers, which is why she enjoys the diversity in the program.

Hemphill should receive her doctorate in May and will be the first person on either side of her family to receive one.

On July 1, 2013, Hemphill was appointed principal at Koontz Elementary School in Salisbury.

“I love, love, love it because it’s like coming home in a way,” she said. “Elementary is my heart.”

Before she applied for the position, Hemphill said she did some research on the school’s namesake, Elizabeth Duncan Koontz.

Koontz was the first African American president of the N.C. Association for Educators.

Although she grew up in a segregated school system, “she fought for the underdog and she fought for the students who didn’t have a voice for themselves,” Hemphill said, adding that she felt a strong connection with Koontz.

“It just spoke to me that the school and the community had honored her or thought enough of her to name the school after her,” she said.

She also said the people at Koontz Elementary are phenomenal and that the school is like a family to her.

“There’s nothing like standing in front of the school in the morning and getting my hugs,” she said. “It’s the best way to start the day.”

Perhaps that’s why Hemphill is so passionate about fostering a welcoming school culture.

“I look at school as an organization of human resources, physical resources and culture. You have those three things in place, the other work is easy,” she said. “It’s about getting the people to buy into the vision.”

Hemphill has goals beyond being an elementary school principal, however.

She said that one day, she’d like to be a superintendent.

“I don’t want to stop there,” she added. “I do want to become state superintendent.”

“But right now, I’m just so excited to be here,” she said.

Hemphill said that her mother and aunt have always had their “foot in the door with education.”

Her mother was on the school board and her aunt was an educator in New York.

“It’s always been in our family,” she said.

Hemphill is the daughter of Gloria and William Hemphill, who are both originally from Buffalo, N.Y., and she has a younger sister, Karen, who recently graduated from Johnson and Wales in Charlotte and is a pastry chef.

Hemphill says her family is “close-knit.”

“My parents are amazing and awesome,” she said. “They always kept me accountable for what I said I was going to do. Always.”

Textile manufacturing returns to Rowan as part of resurgence in South

SALISBURY — At age 16, Brian Tuck went to work for Cannon Mills. The teenager was among thousands of area... read more