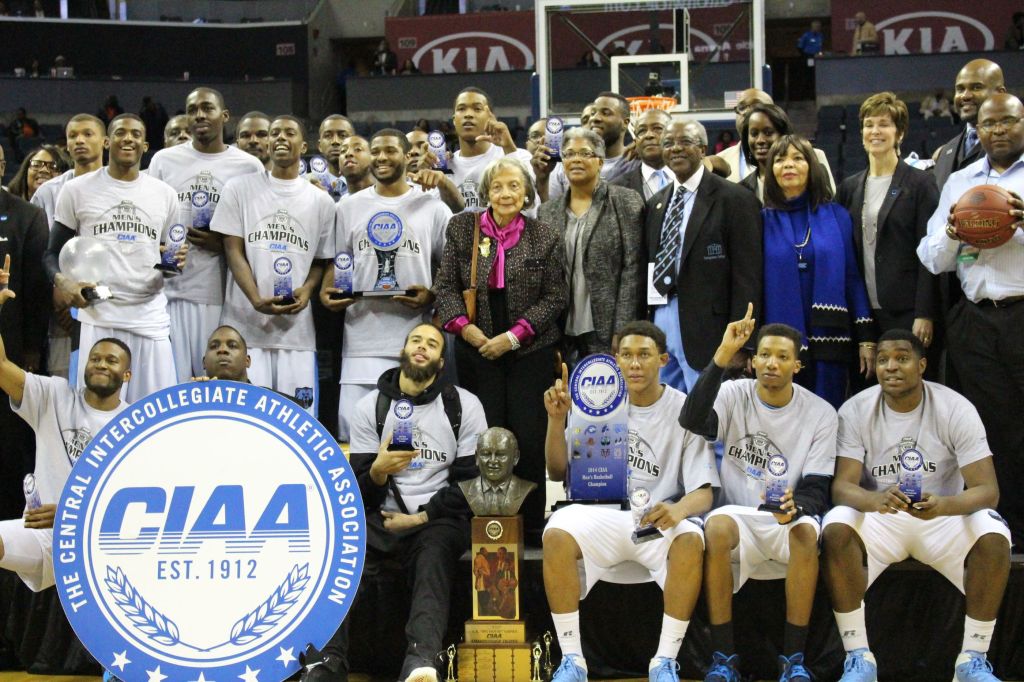 Common sense prevailed Saturday night at Time Warner Cable Arena.
The basketball gods would have to labor to hand the CIAA Tournament trophy to anyone but Livingstone, which was playing in the title game for the third time in four years and boasting two seniors that are among the league’s best players in Mark Thomas and Jody Hill.
In more ways than one, Livingstone’s men’s basketball team faced its demons. The Blue Bears marched through the forest of disappointment before, but this time snatched that prize-winning bass.
It was only natural this team was the one to break free, the same squad that scored 71 points in a half against Fayetteville State and eclipsed 100 points five times. After 69 years of not winning the league, the Bears’ trophy case is no longer bare.
“It’s a great feeling,” said LC coach James Stinson, who fielded so many congratulatory calls and texts that his cell phone battery was drained Sunday afternoon. “It’s important not just for me, but for our faculty, administration and alums. It’s accomplishing something we never have.”
LC improved to 21-7 and gained automatic entry into the Division II Tournament.
Winston-Salem State, which had handed the Blue Bears defeat just a week ago, wasn’t the unflappable team it appeared to be in the regular-season finale. LC led for nearly the entire game, pushing its edge out to double digits early in the second half and eventually led by 20. WSSU made a run to cut its deficit to seven, but a critical play by the league’s Player of the Year settled things down.
“We preach all the time about not panicking,” Stinson said. “The biggest thing for us was when Mark made a steal at halfcourt and got a easy layup, that kind of stopped their momentum.”
WSSU’s WyKevin Bazemore fouled out shortly thereafter and LC scored the next eight points to regain control.
“Our bench really played well,” Stinson said. “The guys were able to give Jody and Mark some rest. Eric Mayo did a great job on the glass. Our whole goal was to be consistent in our offense and not let up in our offense.”
The Bears held WSSU to 32 percent shooting a night after the Rams came back from a 16-point deficit against Johnson C. Smith in the semifinal.
LC had come tantalizingly close before, falling in the championship game last year and in 2011. Last season they were chosen for the DII Tournament, falling in the first round to Fairmont State 91-73. The lopsided defeat was a discouraging note for seniors to go out on, but is a footnote for the Bears’ success this year. It was a vision set in motion last spring.
“The kids set this goal last year,” Stinson said. “After the loss to Fairmont, the graduating seniors told the others they had to get back to that point. Everybody came in on the same page this year.”
LC started the year 6-0 and took defending champ Drury down to the wire in its first loss. There was an unbeaten record at home, 10-0 while within the confines of New Trent Gym.
“I told the guys no championship will be won at Trent Gym,” Stinson said. “We were able to play great at a neutral site three nights in a row.”
The selection show is scheduled for Sunday on NCAA.com.
“We’re not ready to give in yet,” Stinson said. “We want to win a national championship.”