Thelma’s: From food court to front of former mall 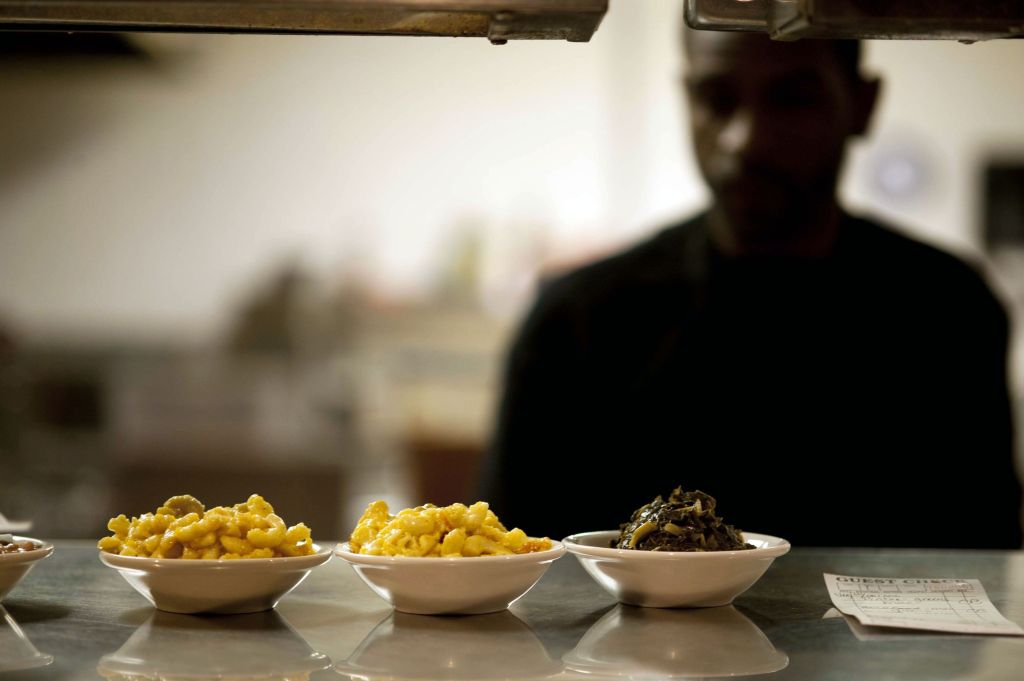 If your momma had a restaurant, it would be just like Thelma’s.

Thelma’s Down Home Country Cooking is now front and center at Salisbury Mall. In December, Thelma Luckey moved her take-out restaurant from beside the former Chick-Fil-A to the former Bailee’s. She hit the ground running, she says, and hasn’t stopped.

Thelma had heard the location had already been spoken for, but she called the mall’s owner to make sure. The property was still available, but, she was told, “That’s a big restaurant.”

“Here,” she says, “we took a whole different direction. We hired a whole lot of people.”

That included nine waitresses to take care of the sit-down diners. Thelma now has a dozen full-time and part-time employees, including her son, Derrick, whose nickname is “Peanut,” her son-in-law Tyre Frazier, her niece Deborah Hall, and her cousin, Sonya Caldwell.

So is she harder on her family members than her regular employees, or does she favor them a little?

“I’m gonna tell you like it is,” Thelma says. “When it comes to my business, you are my employee. It’s business. That’s just the way it has to be.”

Thelma started in the restaurant business at 13, washing dishes for Harry Agner’s daddy, Lee, at Chicken and Oyster Shack. She waited tables there and at Christo’s for years before opening her own place.

Now 61, Thelma is retired from the Army Reserve, and sometimes her staff feels like they need to stand at attention and salute. She retired in February after 29 years as a school bus driver. The past couple of years, she drove a special-needs bus with Erica Miller, who now works with her at the restaurant.

Derrick just about dies laughing when asked what it’s like to work for his mother.

Thelma likes to think of her restaurant as a community gathering spot. On Tuesday mornings from 9 to 11, she opens her door to local veterans to come in and have free coffee and doughnuts (see sidebar).

Although there’s a bar in the restaurant, she does not serve alcohol. Thelma’s hours of operation are 11 a.m.-9 p.m. Monday-Saturday and noon-8 p.m. Sunday.

When asked about the Sunday crowd, she says, “Oh my gosh! It’s overwhelming. I’m working on a Sunday buffet bar. It takes a lot of pressure off the kitchen, and the food would be out so much faster.”

Thelma says her business is good at lunch and dinner every day, with a variety of customers, young and old, black and white.

Post photographer Jon Lakey and I happened to visit on Wednesday, and let me tell you: the chicken and dumplings were perfect. Not too much pepper, not mushy, plenty of chicken. Thelma also said we just had to try her dip chicken. (Hey, it’s a tough job, but what could we say?)

Thelma said she’d fooled around with the recipe awhile before she got the vinegar-based sauce the way she wanted it.

“I think mine is outstanding,” she says. “I may bottle it some day.”

Derrick brought two plates of chicken tenders, one covered in sauce, the other with the sauce on the side.

Let me tell you: there was nothing left on either plate.

“It’s a little sweet, a little hot and a little tart,” Thelma says of her dip. “You can taste all three. It’s got just a little bite to let you know it’s there.”

Thelma makes a double batch — 7 gallons — several times during the week and every day on weekends.

All her recipes are in her head. Thelma says she still enjoys cooking and especially loves baking. She makes the banana pudding from scratch, and bakes pound cakes, coconut pies, strawberry cakes, pineapple cakes and more.

Since moving to her expanded location, Thelma has added reubens and cheesesteak sandwiches to the menu, as well as steaks. She has a wide variety of fried fish. The chicken and waffles are a new addition and have also taken off, she says.

Her cousin, Patricia Alexander, who’s come in to pick up chicken and dumplings for her dad, doesn’t hesitate to straighten people out when they think otherwise.

“All that stuff is from scratch,” she says.

Curtis and Jean Waller have been coming in twice a week for about a month now.

“We really like it,” says Jean, who’s a vegetarian, and loves the potato salad and coleslaw.

“You get a good portion of everything too,” he adds.

Carol Steele has come in to pick up her regular order of chicken wings and potato salad.