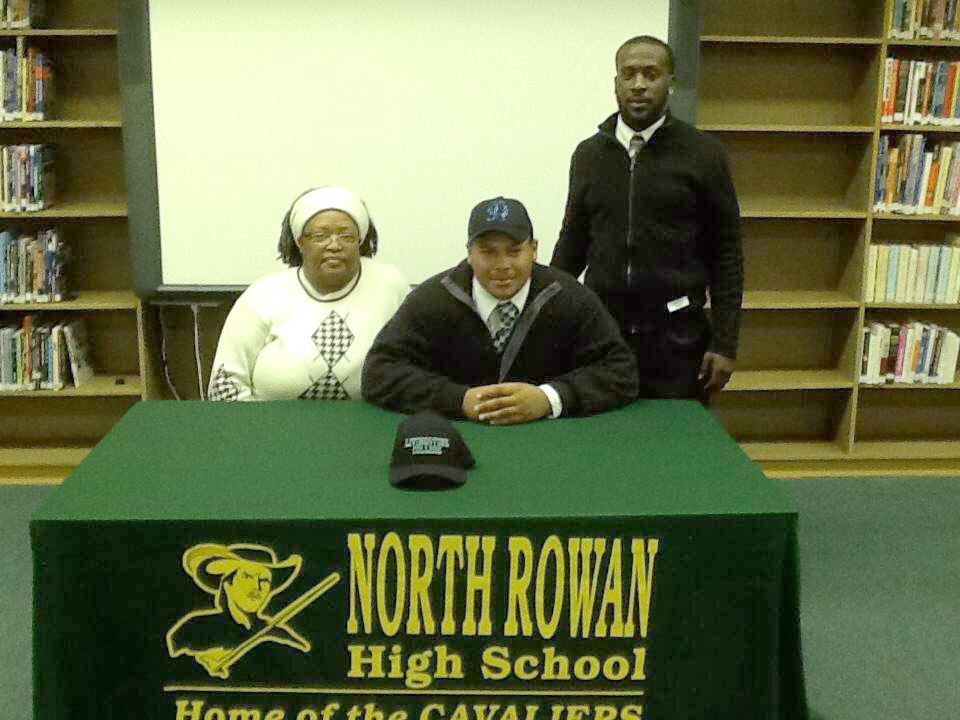 SPENCER — The famed Livingstone “Who y’all with?” cheer erupted in North Rowan media’s center, and while libraries are usually places of peace and quiet, dozens of students immediately answered loudly with the correct response — “LC!”
North Rowan defensive end Cecil McCauley was the reason Spencer temporarily turned into New Trent Gym or Alumni Stadium. McCauley is indeed with LC after signing papers with the Blue Bears amid cheers, high-fives and pats on the back from friends and teammates. McCauley’s mother Avis and his brother Jesse Rudisell, who quarterbacked the Cavaliers during leaner times, looked on with pride.
“This is an important day,” North coach Joe Nixon said. “A college signing is important and it’s always a great thing for our program. Cecil made some long trips to other schools, but sometimes the best place is right here at home. Cecil enjoyed his visit to Livingstone, and he should have a good career there.”
Coach Daryl Williams led Livingstone to a 3-7 record and one CIAA victory last fall, and while that may not sound earth-shaking, it’s solid progress from where the Blue Bears have been. Williams is enthusiastic about keeping local talent at Livingstone, and the Blue Bears signed East Rowan lineman T.J. Jefferson last year. Now they’ve added McCauley to the roster.
“I didn’t want to rush into anything,” McCauley said. “I visited Ferrum (Va.) and was recruited by some other schools. But it was getting to the point where I had to make a decision, and I decided to take the offer from Livingstone. I think Livingstone was a blessing in disguise all along.”
Livingstone assistant coach Scotty Robinson, the former Salisbury and East Carolina defensive lineman, recruited the 6-foot-1, 230-pound McCauley.
“At first, I didn’t know he was a Salisbury guy,” McCauley said with a smile. “But I was impressed with him. Coach Robinson’s position coach at Salisbury was Steve Williams, and that’s the same guy who’s coached me at North. Now Coach Robinson will be coaching me, and I look at that as a great blessing.”
Livingstone’s head coach also was at North’s playoff games watching MCCauley and other Cavaliers.
“Coach Williams was very visible at our games,” said Nixon, a Catawba grad. “And we made a long enough playoff run that Livingstone and Catawba both were able to come watch us practice.”
North had a tremendous season in 2013, rolling to a 13-1 record before losing to eventual 2A champion Shelby in the third round of the playoffs. McCauley, the fourth North senior to sign a scholarship in recent weeks, had an outstanding year as an anchor in North’s 4-2-5 defense. He was All-Rowan County and All-Central Carolina Conference.
“No defensive lineman in the county had better stats than he did,” Nixon said. “He was so consistent every week that we almost took him for granted.”
McCauley’s super season include five tackles for loss against 4A Davie and five more against Lexington. Most of those TFLs against Lexington came on sacks. McCauley had three solo sacks in that game and shared another. McCauley also had multiple sacks in the East Rowan game and finished the season with 9.5 sacks, 39 tackles for loss and 17 quarterback hurries.
“As a senior, you try to lead as much as you can,” McCauley said. “We wanted it be a year to remember, and we did that. The game I’ll remember most is Lexington because that was homecoming, and it was great seeing the crowd come back to our stadium. That was fun. I won’t forget that.”
North linebacker Xavier Robinson, who signed with St. Augustine’s, appreciated McCauley’s effort. McCauley was one of the guys who helped Robinson pile up huge tackle numbers and earn county and conference defensive player of the year numbers.
“Cecil is a hard-working person and just a good person to be around,” Robinson said. “He played hard games for us. Even in the Shelby game when things didn’t go as well for us, Cecil kept playing hard.”
McCauley is a good student, especially in math, and is looking forward to the academic challenges and well as the athletic challenges at Livingstone.
“It’s almost like being a sophomore in high school all over again, not knowing exactly what to expect,” McCauley said. “But I believe I’ll be comfortable playing in Livingstone’s defense.”
Nixon believes the Cavaliers, who achieved a No. 1 state ranking for much of the 2013 season, can be a factor in 2A again in 2014, but McCauley’s departure leaves a void.
“He’s one of the guys who helped us get to where we are now,” Nixon said. “He started every game for two years. A guy like that isn’t easy to replace.”