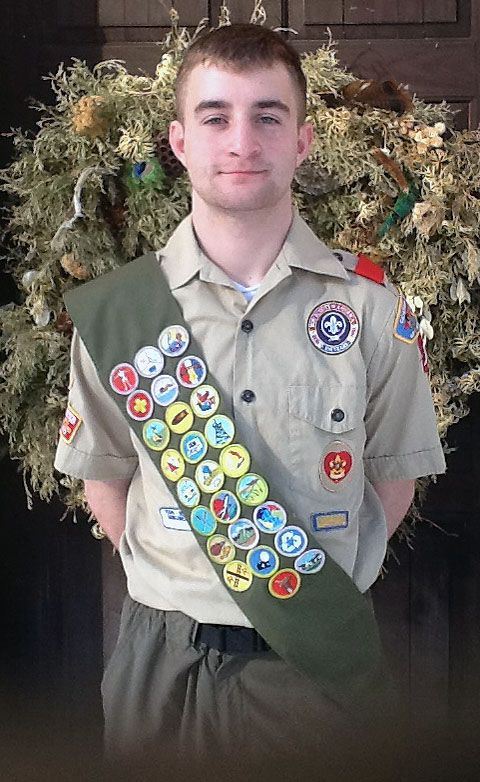 Simon Andrew Connolly received his Eagle Scout Award Sunday, Feb. 23, 2014, at Milford Hills United Methodist Church. Steve Miller, Scoutmaster of troop 349 of Spencer, made the presentation.
Simon is a member of the National Honor Society and served as a Junior Marshal in 2013. Simon is also a member of the Men’s Cross Country team and Wrestling team. As a wrestler, Simon has been Conference Champion and Regional Champion.As a junior, he finished 5th in the state and helped his team win the State Individual Title.
While a member of JROTC, Simon has been Battalion Commander and this year won the Legion of Valor Bronze Cross, JROTC’s highest national award, for displaying outstanding service and leadership. Most recently, he was awarded a four year ROTC scholarship.
For Simon’s Eagle project, he coordinated the efforts of staff members of Rowan Museum, fellow scouts, friends and family to expand the stone walkway outside the kitchen area at the Old Stone House in Granite Quarry. Special thanks goes to Lowe’s, Dr. Kenneth Washko and Dr. Kevin Showfety for their gracious and kind donations to this project. Thanks also to Robbie Cochran and Rowan Museum for their help, time and guidance in keeping this project authentic to the home.
Simon is the son of Vincent and Angela Connolly of Salisbury and the grandson of Clarence and Dottie Peoples of Clemmons, the late Robert Loftis, Michael and Maryvonne Connolly of Concord.