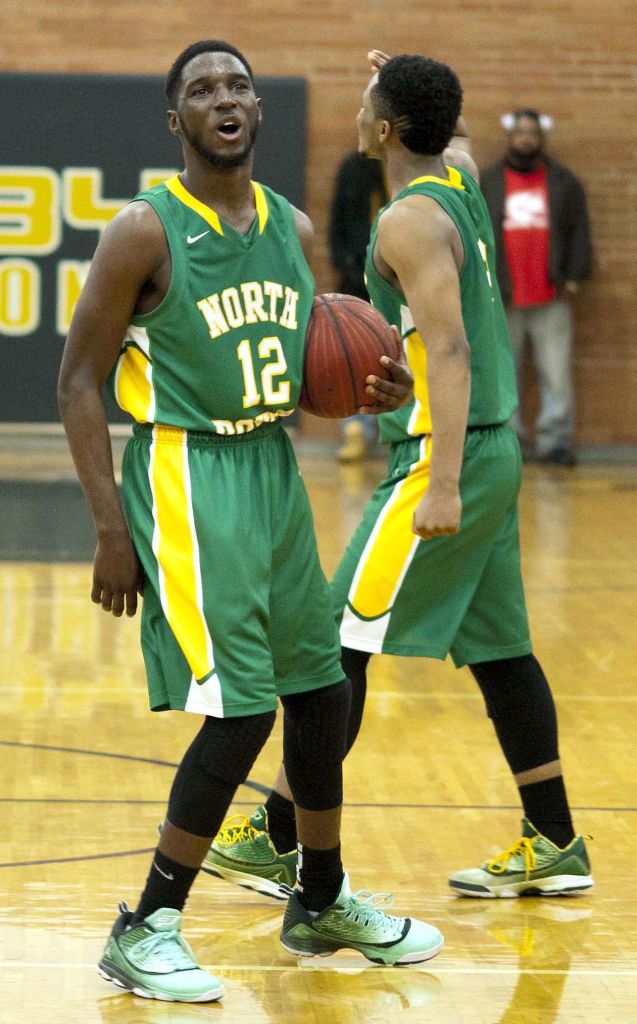 SHELBY — The front page may not be big enough for this story.
It’s about villains and heroes and how March came in like a Golden Lion for North Rowan’s pinch-me-I’m-dreaming boys basketball team.
“It’s playoff time,” Michael Connor indicated Friday night in the jubilant Cavs locker room, moments after North finished off February by finishing off favored Shelby in overtime. “You go hard or you go home. You can’t take any plays off because you’re thinking, the whole time, it could be your last game. Your last game ever.”
North 77, Shelby 70 was a heated, 36-minute test-of-nerves. There was nothing ordinary about it. And while it was easy — logical perhaps — to think of it as payback for November’s season-ending football loss, it really wasn’t.
“Well, a small part of it was,” said Alexis Archie, the quarterback for Joe Nixon’s once-beaten 2013 gridders. “It was hard to lose the last game on our home field.”
Michael Bowman, the forward with the doorway-wide shoulders, took the grudge a step further. “We couldn’t let them beat us twice.”
Here’s the thing about that: if you look at only the bones of the story, you miss the heart of it. And at its core this victory was more about stopping a great player, not a great team.
We’re talking about Shelby senior Gabe DeVoe, a 6-foot-4 guard who is clearly one of best net-straighteners in state history. And while the Clemson-bound sniper rang up the Cavs for 37 points, he wasn’t exactly ginsu-sharp from the field. His game looked and felt like an itchy wool sweater he couldn’t get comfortable in.
“It doesn’t feel right,” said DeVoe, who squandered a chance to win the game when he missed the second of two free throws with half-a-second remaining in regulation. “I wanted to go out with a championship. But the shots I normally hit weren’t falling. I settled too much for jump shots instead of taking it to the basket. Yeah, I thought this would be a tough game. We all did. But losing? It was the last thing on my mind.”
DeVoe was bumped out of his comfort zone by Connor, the beating heart of the Cavaliers. “He is a great player,” Connor said. “Everything they say about him is true.”
North teammate Jalen Sanders offered a brief elaboration. “You couldn’t relax on defense,” he said. “(DeVoe) can shoot from anywhere and he’s strong. There’s a reason he’s going to Clemson. If he gets to his launching pad he can dunk on you.”
Then Sanders threw Connor a verbal bouquet. “I think Mike checked him really, really well,” he smiled. “If (DeVoe) had 37 points, he probably took 47 shots.”
When the clock finally ticked to a close, North fans rushed the court like joyful inmates sprung from prison. Shelby coach Aubrey Hollifield was left staring blankly into the distance, hands on hips, like he was watching his prized yacht sink. And North senior Dalton Nelson — a 6-8 role-player who deserves more recognition than he gets — made the night’s most poignant comment.
“I didn’t want this to be a Cinderella story for us,” he said, almost sheepishly. “We’re not turning back into pumpkins at midnight.”