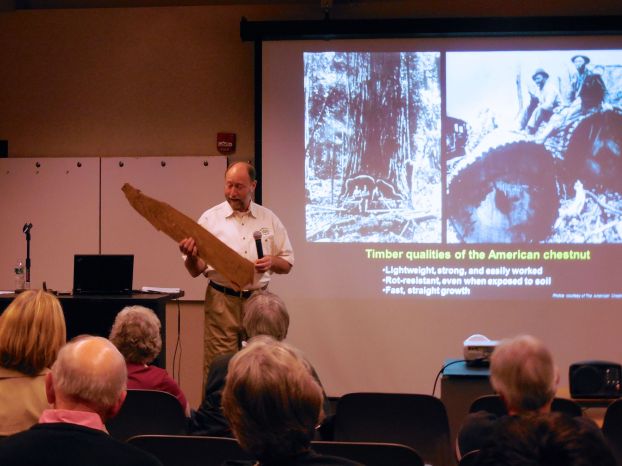 Nearly 80 people came to the Center for the Environment building on the Catawba College campus Tuesday to hear about reforestation efforts in Appalachia on sites of former surface mines.
Dr. Patrick Angel, senior forester and soil scientist for the U.S. Department of the Interior’s Office of Surface Mining, opened his presentation by commenting on the irony imbedded in the title of his presentation, “Hope for Appalachia: Returning Surface Mines to Healthy, Productive Forests.”
“One of my buddies said, ‘How can you put the words ‘hope’ and ‘strip mining’ in the same sentence?’ And I said ‘Well, that’s what I’m going to explain when I get there,’ ” Angel said.
Angel then set the scene by explaining the many negative impacts coal mining in the Appalachians had on surrounding communities. Spoil, the leftovers from coal mining, would be piled up on ledges and often caused landslides that endangered nearby homes and communities. However, Angel said that before there were federal regulations on spoil, mining companies used to plant trees on emptied mines, which flourished into growing, vibrant forests.
That isn’t the case anymore.
In order to prevent the landslides common to mines in the early and mid 20th century, federal law required mining companies to compact the spoil in order to stabilize the mining area. This compacted ground is an inhospitable environment for trees because it is too dense to allow for root penetration, gas exchange and water infiltration. Instead, mining companies often plant non-native grass species that will grow in the thick soil, which adds dangerous competition to any saplings that are able to take root.
As a result, Angel said, the majority of abandoned mines in Appalachia are barren wastelands. Some are used as building sites for airports, residential areas, or commercial areas. But most are left as empty prairie in what Angel called “arrested succession” where the natural breakdown of soil and progressive growth of vegetation cannot occur. If left alone, Angel said, these mines could be wastelands for decades, if not centuries. These grassy wastes are not how things should be, Angel said.
“It shouldn’t look like South Dakota,” he said. “It should look like Kentucky.”
Angel said that for a long time the Office of Surface Mining focused all its energy on making sure that mining grounds were stabilized and didn’t look at the ecology of the situation. It wasn’t until Angel was approached by several groups of scientists who were concerned about the arrested succession that he wondered if there wasn’t another way.
Angel said several scientists suggested seeing if the spoil could be left loose and trees could be planted instead.
“I looked at the law and there was nothing that would prohibit that,” he said.
So Angel helped start a program called the Appalachian Regional Reforestation Initiative to convince mining companies to plant high-value hardwood trees on their mines after the coal was gone. The initiative determined that for trees to survive on an abandoned mine, they needed to have four feet of suitable material, compaction needed to be avoided, ground cover needed to be limited, a variety of hardwoods needed to be planted and proper planting techniques needed to be used. With these boundaries in place, reforestation has flourished on empty mines. The initiative has planted more than 85 million trees on 125,000 acres since 2005.
Not only could Angel reforest old mines, but he discovered that mine spoil, when uncompacted, was the perfect environment for the American chestnut — a once plentiful species of hardwood that was nearly decimated by blight in the 20th century. In addition, the natural range of the American chestnut almost perfectly overlaps current mining ranges. Since it is near extinction, the scientific community has been hard at work breeding an American chestnut that is resistant to the blight — and they’ve succeeded.
Angel says being able to offer mining companies the opportunity to grow American chestnuts has been a huge selling point. He said the trees have almost reached a mythic status — miners have heard about the trees from their parents and grandparents and are eager to bring them back if they can.
“The American chestnut is the chrome bumper that’s selling the cars,” Angel said.
Now, Angel tries to convince mining companies that growing high-value hardwoods is more cost-effective than compacting the spoil and seeding grass. Angel works with a nonprofit organization called Green Forests Work to sell and plant trees. Green Forests Work has planted over 1 million trees since 2009. Angel has gotten a lot of newly abandoned mines to agree, and is looking for legacy mines — old mines that were emptied long ago. He said making a mine with compacted spoil habitable for trees is as easy as plowing the ground — though it does take a bulldozer.
Angel said his work is hard, but that it’s gotten better.
“When I first started, wildcat miners were shooting at me,” he told attendees.
There are still some issues, however. Breeders still aren’t sure that the American chestnut crossbreed will be successful in the long run. And Angel has to look at each mine carefully to make sure that the company will leave trees to grow.
He won’t sell to mines that violate federal law or are planning to use the land for development. But, he said, even if the trees are cut down in the end, trees — unlike coal — are a renewable resource.
“Whatever society decides to do 80 to 100 years from now is another matter,” Angel said, but added that he hoped future generations would appreciate the value of forests and reforestation enough to leave them alone.

A business owner who completed the majority of her education in Salisbury has filed to give N.C. Sen. Andrew Brock... read more