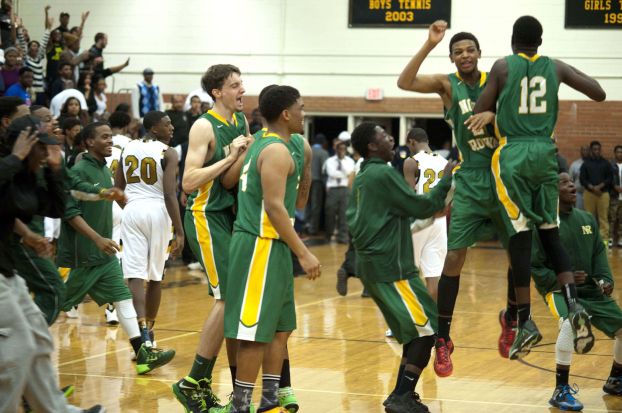 North heads to regional after dramatic win at Shelby

SHELBY — North Rowan’s 77-70 overtime win at top-ranked Shelby on Friday was a daytime soap with a 7 p.m. start time.
Drama piled on drama in a hot gym where fans were at least as fired-up as the athletes.
Shelby superstar Gabe DeVoe crouched at the foul line with a half-second on the clock at the end of regulation with his team down one, and North Rowan fans shook their heads in disbelief that a third-round 2A playoff game was going to be decided by one bang-bang whistle at the end.
DeVoe, a Clemson signee, swished his first of two free throws for his 37th point and brought his team even with North Rowan at 57-all. His second one would win it.
“But even at that point, even with a half-second left and DeVoe shooting a free throw, I was still believing we’d win this game,” North coach Andrew Mitchell said. “Somehow, someway, we’d win.”
North’s 6-foot-6 center Dalton Nelson wasn’t so sure a celebration was coming, but he tried hard to stay focused on the next play.
“It was going through my mind that maybe we were going to be a Cinderella story, that we were going to come oh-so-close only to lose to the No. 1 team in the state,” Dalton said. “DeVoe is a big-time player and he makes clutch free throws. But I told myself if he did miss, that rebound had to be mine.”
DeVoe did miss. Dalton did rebound, and North, 10th in the state poll and No. 7 in the bracket, headed for overtime against a a second-seeded team that had won 23 games in a row.
North headed to that overtime without Michael Bowman, who had scored 16 points. Bowman got 11 in the first half and kept the Cavaliers in the game.
Shelby led 23-16 when DeVoe hit a terrific shot to close the first quarter. North caught up in the second period, but when Kenyon Tatum missed a dunk, Nelson missed two free throws and Jalen Sanders missed a 5-footer, the Cavaliers (19-5) fell behind 35-29 at halftime.
North’s Michael Connor spent the first half focusing totally on the defensive end against DeVoe, but Connor’s three 3-pointers in the third quarter pushed the Cavaliers to a 48-46 lead.
“No. 12 (Connor) really hurt us,” Shelby coach Aubrey Hollifield said.
The fourth quarter was the dogfight everyone anticipated. Sanders stayed on the attack, earned free throws and made them.
“Coach told me I had to play confident,” said Sanders, a sophomore who led the Cavaliers with 22 points. “Go to the basket hard and make the free throws.”
DeVoe usually answered Sanders.
“DeVoe is one of the best high-school players I’ve ever laid eyes on,” Mitchell said. “I thought Michael and Jalen did a great job guarding him, but there were times he’d get to the baseline, we had too much floor to cover, and we couldn’t stop him.”
North led 54-50 late in the regulation, but DeVoe dunked as he was fouled. When he missed the free throw, the Golden Lions got the ball back, and DeVoe drove and scored again to tie the game.
DeVoe made two free throws for a one-point Shelby lead with 44 seconds left.
Connor missed a corner 3 with 17 seconds left, but North fought for the board and maintained possession.
Bowman drove with 8 seconds left and missed, but Tatum grabbed the ball in the lane and stuck it in to put North on top 57-56 with 4.7 seconds left.
Shelby almost turned the ball over but was awarded possession on the sideline in the backcourt with 4.3 seconds left. After a timeout, Mitchell put both Sanders and Connor on DeVoe to try to deny him the ball.
DeVoe got it anyway, escaped down the sideline and drew the fateful foul that set up overtime.
“He’s an ACC player,” Sanders with a sigh. “Michael defended him very hard, but DeVoe is just so strong. You’re not going to stop him much.”
North dodged the end of its season when DeVoe missed his free throw, and the Cavs played with energy and verve in the overtime. Bowman was gone, but Alexis Archie stepped in for him on the boards and as another ballhandler. Archie solid good decisions and North abstained from taking any hasty shots.
“Michael’s a great player,” Archie said. “When you’re called on to replace someone like that, you just go as hard as you can.”
Sanders and Connor (19 points) owned the overtime, combining for 19 of North’s 20 in the extra session.
North jumped ahead at the foul line. Nelson, Archie and Tatum cleaned the boards on Shelby misses, and the defining play of the game was triggered by Nelson. With North leading 67-63, Nelson blocked a layup, Archie, looking for some payback for North’s football playoff loss to Shelby, out-fought Lions for the ball in a scramble and fired a pass to Sanders, who was ahead of the pack. That layup gave North a six-point lead.
Moments later, Sanders drove right into the teeth of multiple Lions to finish at the rim, and the Cavaliers were up nine points and headed for victory.
“It was a game where we played with intensity on every possession, and that’s what it was going to take to win here,” Mitchell said. “Nelson had a great game. I thought his length and his effort was the difference.”
Nelson played the most forceful game of his life. He played the way he played when North beat a towering Bull City Prep team.
“Coach pushed all the big guys,” Nelson explained. “We had to step up. We had to rise to the challenge.”
The Cavaliers did that, but if DeVoe makes that free throw, it still wouldn’t have been enough.
“What can you say?” Hollifield said. “It’s not like there’s someone else we’d rather have shooting that free throw, Kids miss free throws. That’s just basketball. Give credit to North. They’re very talented and they took us out of some of the things we like to do.”
North will play in the regional in Greensboro on Thursday.