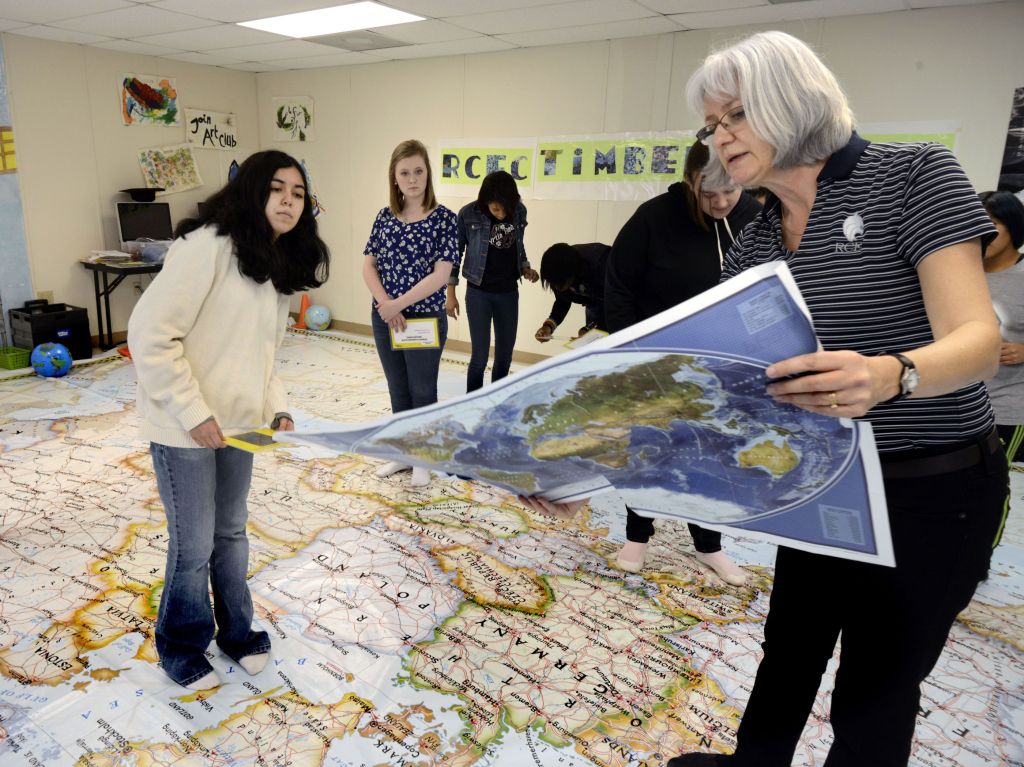 Rowan County Early College students had the unique opportunity to sit, stand and walk on a giant map of Europe on Friday.
Educators are focusing on literacy, and “being able to read a map is geoliteracy,” said Theresa Pierce, a world history teacher at the school.
Pierce is a member of the North Carolina Geographic Alliance and was able to secure the map for a few days while it was on the way to Washington, D.C., from the N.C. Social Studies conference in Greensboro.
The 26-by-26-foot map covered the floor space of an entire classroom, giving students the opportunity to move around as they located countries, cities, transportation stations and landforms.
The map at the early college was one of six different giant traveling maps owned by National Geographic. The other maps show Africa, Asia, Europe, North America, South America and the Pacific Ocean and can be rented, along with supplemental, interactive educational materials.
“It was cool. It was really big,” said 10th-grader Marco Mercado, adding that he had a fairly good understanding but that the interactive map allowed him to “see where they really were.”
Students practiced using latitude and longitude to locate places. They were given coordinates and used chains to trace the lines to their assigned destination.
They also learned about map symbols and how to use a compass rose. Students made human compass roses and located peninsulas, swamps and other landforms on the map.
Pierce added her own materials as well. She passed out postcards she has collected throughout the years and asked her students to locate the countries the letters were sent from. She also had them locate where different currencies and souvenirs came from.
During one activity, students researched different foods and found their origins, as well as traced how they changed as they moved to different parts of Europe.
The map is a “memorable way to make it real for the kids,” Pierce said.
In another activity, Pierce had students find the countries where different books or stories came from.
Mercado said he learned that “a lot of literature does originate from there.”
He was surprised at the amount of well-known books that came out of the smaller European countries.
He said he enjoyed tracing stories and items back to where they came from.
Pierce even encouraged her students to take selfies, a self-portrait taken on a cell phone, as a way to interact with the map.
She said that each activity reinforced geoliteracy skills.
She also wanted to help students look outside the United states and see how things are different in Europe.
At one point, she pointed out many of the railways throughout Europe and explained how Europeans rely on railways for long distance transportation.