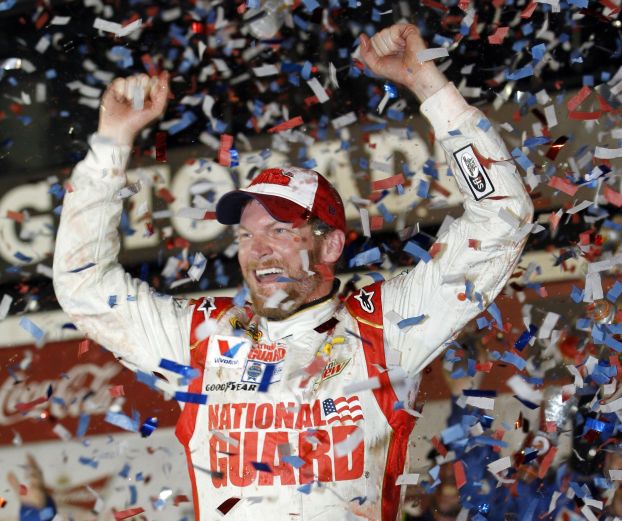 Dale a hit in the twitterverse

AVONDALE, Ariz. — NASCAR’s most popular driver won the sport’s biggest race last weekend.
It may not have been the most exciting news of the week, at least when it comes to fans of Dale Earnhardt Jr.
A reluctant participant on Twitter for years, Earnhardt burst into the Twitterverse this week with a flourish of revealing tweets that have given fans insight into his life they never knew before.
“I don’t know what I was thinking, why I didn’t get on there earlier,” Earnhardt said from Phoenix International Speedway on Friday. “It’s a great way to tell people things you appreciate and it’s instant.”
Earnhardt has had a Twitter account since 2008, when JR Motorsports signed up @DaleJr.
Earnhardt had no interest in that end of social media at first, so the account sat dormant for years.
That changed early Monday morning, hours after Earnhardt won his second Daytona 500 and posted a photo of himself with the trophy: “Tonight seemed like as good a night as any to join Twitter. How is everyone doin?”
Earnhardt’s Twitter account soared once he started typing 140 characters at a time, rising to more than 527,000 followers by Friday.
“It’s been a very interesting follow, him getting creative,” fellow Sprint Cup driver Jimmie Johnson said. “He must have been watching for afar for a while because he has the lingo down, attacking people, holding up pretty well. He didn’t enter as a rookie on Twitter, in my opinion. He’s off to a pretty good start.”
It’s certainly been entertaining and fairly revealing.
Earnhardt participated in a Twitter chat with fans on Tuesday night and kept the tweets rolling this week, up over 130 by Friday morning. Among the revelations he’s made on Twitter so far:
—He always goes the speed limit, figuring he’d look stupid if he gets a ticket when he’s supposed to be a professional driver.
—If he had to eat only one food for a month, it would be barbecue.
—His favorite car to drive is a midnight blue 76 Chevy Laguna.
—The one topping he would want on a pizza is banana peppers.
—His favorite style of racing is on short tracks such as Bristol and Martinsville.
—Hanging from a fork in a tree near his house is the cockpit of Will Power’s IndyCar from the crash in Las Vegas that killed Dan Wheldon.
—His favorite color his orange.
—His favorite band is the Matthew Good Band.
—His favorite gadget is his iPad and JBL speaker.
“I’m still learning. There’s still a lot of questions about the software, how to physically use it,” Earnhardt said. “I never used it before. It’s been fun to interact with the fans … and it was enjoyable to be plugged in whenever you feel like it. I hope the fans have enjoyed it.”
The fans seem to and so have his fellow drivers, who have tried enticing Earnhardt to join Twitter for years.
“I, among many others have pushed him to do it,” Johnson said. “There’s been a lot of people on social media, even the people who run Twitter have come to me to put pressure on him over the years and it just was something he wasn’t interested in. As sharp as he is, as much time as he spends in the digital world, I knew when he got involved, he would love it.”
He sure seems to be so far.

It doesn’t take analyzing skills of a psychiatrist to know that there’s a palpable buzz heading into today’s 2A west... read more