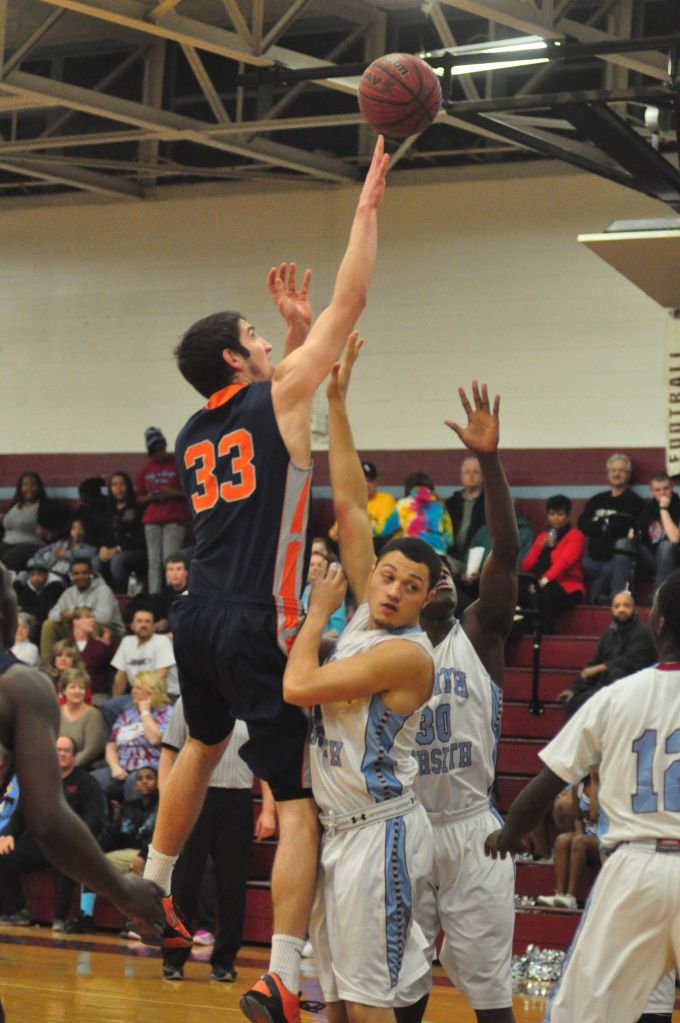 WINSTON-SALEM — Carson head coach Brian Perry sat in the North Forsyth weight room, exhausted.
One by one, his players come over and shook his hand after playing the game of their lives. They were at a loss for words.
The Cougars dropped a double-overtime heartbreaker to North Forsyth in the third round of the 3A state playoffs, 94-91, seeing their season end on a last-second shot that hit backboard and rim before bouncing harmlessly to the court.
“If you were to picture a sectional championship game, that’s what you picture right there. Two great teams going back-and-forth with neither one refusing to lose the game,” Perry said afterwards. “Unfortunately, we just ran out of time.”
Carson, which wasn’t even supposed to be in the game after upsetting top-seeded Asheville Erwin Wednesday night, battled a senior-laden Viking lineup for four quarters before taking it to the extra sessions.
A fastbreak bucket by North late in the second overtime proved to be the game winner.
“It was a heck of a game. It was back-and-forth. They couldn’t stop us and we were having a hard time stopping them,” he continued. “It was just a tough game. It was a battle.”
The battle culminated an impressive two-week stretch for the Cougars, who were playing in first sectional championship in program history.
After falling on a buzzer beater against Cox Mill on Senior Night, Carson regrouped and refocused and became what Perry called the “toughest, grittiest team” he’s ever been around.
The Cougars blew past Central Cabarraus in the tournament opener before upsetting heavy-favorite Concord to reach the SPC championship game.
Carson then gave the Chargers another battle in the title match before losing late in the fourth.
Entering the state playoffs, the Cougars turned it up another notch, crushing West Henderson before stunning previously unbeaten Erwin on the road to punch their ticket to the third round.
“For two weeks, this has probably been the toughest, grittiest team I’ve ever been around. Without question,” Perry explained. “From the loss against Cox Mill on Senior Night until Friday, I’ve never seen a team put as much into making a run as they did.
“The hurt after that game just blossomed into effort and energy and togetherness and everything that you preach about as a coach, and that was what we’ve seen over these past two weeks. These have been the funnest two weeks I’ve ever had coaching.”
That same tenacity and grit was on full display Friday in a hostile environment in Winston-Salem.
Carson matched the high-scoring Vikings point-for-point in the first. Senior Tre Williams came up huge, scoring 10 points in the final 2:49 to end the first down 25-22.
Appalachian State commit Kedrick Flomo and running mate Xavier Jackson took advantage of the Cougar man-to-man defense in the first half, combining for 31 points to give North a three-point edge at the break at 46-43.
Coming out of the locker room, Perry switched to a 1-3-1 zone with big man Colton Laws patrolling the top of the key to slow down the dynamic backcourt.
The transition closed off the lane and the Cougars took advantage in the open court.
Williams hit another trey before finding Laws up the court in transition to cut the deficit to three. Jacob Raper then buried back-to-back 3-pointers, with the second one coming a few steps from beyond the arc, to put Carson ahead for the first time since the opening minute, 54-51.
The Cougars led 65-61 at the end of three.
Carson pushed the advantage out to seven (74-67) with 3:26 remaining on a pair of Marquez McCain free throws before seeing the Vikings storm back.
Flomo scored eight points in a flurry and blocked a last-second shot to send the game to overtime tied at 77-all.
In the first overtime, Williams continued his impressive night, scoring all five of the Cougars’ points, including a strong layup to tie the game again at 82 with 18 seconds left.
A North miss at the horn pushed the game to a second extra session.
Carson scored the first four points to grab a quick 86-82 edge but the Vikings had an answer, pulling ahead 87-86.
Jonathan Rucker responded with a big trey, but Jackson answered with another 3-pointer.
“In the last overtime, we would score and go up one,” Perry said. “But then we could never get that stop to give ourselves a chance to come back down and get another one to separate us and make us feel comfortable.”
And that eventually cost them as Flomo hit a runner to put the Vikings up for good at 92-91.
Carson had two chances to win it in the final minute but a turnover and a Hail Mary 3-pointer the buzzer was not enough.
“They defended what we were trying to do there pretty well,” Perry added.
Williams played lights out in his final game in a Cougar uniform, scoring 28 points to lead the team. Laws added 22 points inside.
“Tre was a floor leader for us,” Perry said. “He made play after play at the end there and you thought every play he made was going to be the one that won it. But they had playmakers on their side and would make a play right back at us. Unfortunately, time ran out at the wrong time for us.
“That senior class has been so critical for us,” he continued. “They had to step in as freshman and play right away. And to watch them grow up and to do what they’ve done and to have the success that they had, it’s tough to see them hurt after a game like this.”