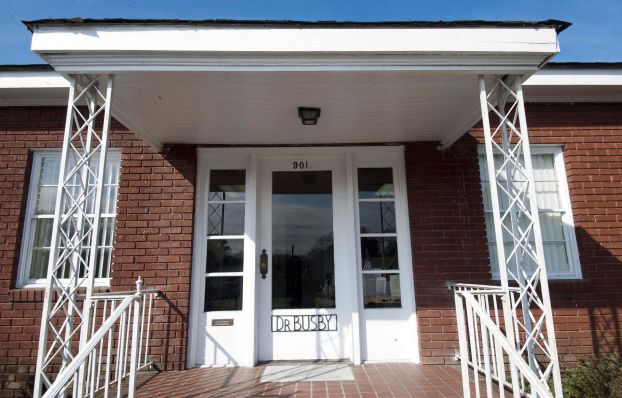 Novant Health Rowan Medical Center — so big that it needs three names — rises skyward behind the one-floor house. All other things related to the hospital or parking have taken over the rest of the neighborhood.
It’s an area sometimes frantic with ambulances coming or going from the emergency room, which is just a stone’s throw away.
For 55 years, Helen Brown has been opening up the little house every morning at 9 and closing up at 5 in the afternoon. In the hours between, she has managed this homespun medical office for three generations of Busby doctors.
“There are not many offices like this,” Brown says.
The general, vascular and thoracic surgery practice of Dr. Rudy Busby officially closes today, as the retiring Busby sees his final patients. Brown will stay on a couple of days longer, keeping herself available for patients stopping in for their records.
She calls them “my patients” and says, as straight-to-the-point as the Busbys she has worked for might have been, that she loves them and will miss coming to work.
“I’m probably going to grieve for three or four months,” Brown says. “I’ve probably already started my grieving.”
Patients have been stopping by with gifts for Brown, Rudy Busby and his wife, Karen, the office nurse for the past 18 years.
“My nurse,” says Helen, whose college training long ago was in medical records.
“One of my instructors said, ‘Never work with a doctor’s wife,’” Brown recalls. “If I ever got into the teaching profession, I would never tell my students that.”
As Brown answers the telephone during this period of closing up shop, you can tell from her responses that patients have heard the news.
• “Breaks your heart, huh?
• “You got my letter, did you?”
• “Can you sign a release, so I can give you your records?”
• “I know, I’m going to miss you, too, honey.”
ggg
Helen Brown, almost 81, has never sat behind a sliding glass window. In the waiting room of 10 chairs, magazines and a water cooler, she greets people from behind a waist-high counter not far from the front door.
There are no private conversations here. Brown uses a separate room, what she calls her “inner office,” for private patient interviews.
Brown’s graciousness in roles as wife, mother, grandmother and steadfast employee probably hide how goal-oriented she is, especially when it comes to helping people.
“She’s a deeply caring person,” Karen Busby says. “You can’t imagine the number of people she’s taken under her wing and gotten them through life.
Karen Busby mentions how Helen looked out for the needs of a manic-depressive friend and how she found a couple financial help for their medical bills.
Helen and her husband, Ralph, cared many years for his mother, who lived to be 103.
“Look what she’s done with her yard sale,” Dr. Rudy Busby adds. “That’s her.”
Over the past nine years, encompassing about 15 yard sales, Brown has raised $141,000 for cystic fibrosis research.
The event has become so big that Salisbury Police transform Emerald Street, which runs by her house, into a one-way thoroughfare for two days each spring to accommodate all the traffic.
Brown also has 25 volunteers who help her with the back yard sale.
She started the yard sales because two of her grandchildren, Anna and Michael Johnson, have cystic fibrosis. Anna, 26, will soon be getting married. Michael, 21, attends Appalachian State University.
Her grandchildren have benefited from vest therapy, which creates chest compressions to aid them in clearing their airways. Those vests weren’t available when Brown held her first yard sale, so she thinks the research money is really improving the quality of life for people with CF.
“The list goes on and on with the number of lives she has touched,” Karen Busby says. “And she feels equally as strongly that they have touched her.”
ggg
This will be the first time in 100 years there hasn’t been a medical doctor named Busby practicing in Salisbury or Spencer.
“Now, I’m not old enough to have worked for them for 100 years,” Brown laughs.
It started with Rudy’s grandfather, Dr. J.G. Busby, a dermatologist. His sons, Drs. George and Trent Busby, followed — George was a general surgeon, while Trent specialized in obstetrics and gynecology.
George Busby, who died in 1989, was Rudy’s father.
In 1959, Brown first came to the brick medical office. Though it looks like a house, Dr. George Busby designed and built it specifically for his practice and invited his brother, Dr. Trent Busby, to join him. It was custom made for the both of them.
Brown served as office manager for all of the Busbys, including 30-plus years for Trent and George and 37 years for Rudy Busby, who started practicing in Salisbury in 1977.
“I thank the Lord he led me to answer the ad in the newspaper,” Brown says.
A friend in 1959 predicted she would last only two weeks in an office with the sometimes gruff Busbys.
Brown notes that same friend today says, “What did I know?”

ggg
Both Rudy and Karen Busby say Brown is the boss.
“I do exactly what she tells me,” Rudy Busby says. “… She’s one of a kind, a remarkable and wonderful person. She’s been an asset to me and my whole family.”
Karen Busby says Helen watched Rudy grow up, but was always respectful to him from the day he returned to Salisbury as a surgeon.
The feeling was mutual. Brown says everyone in the Busby family treated her with respect, In particular, Brown appreciated Rudy’s directness with her and patients.
“He is to the point, which is good,” Brown says. “I think all the Busbys were that way.”
Brown shakes her head a little, realizing she has spent more than half her life in the Busby office, answering the telephone, interviewing patients, scheduling surgeries, doing the bookkeeping and filing insurance claims.
She says the paperwork over five decades has increased three-fold.
Karen Busby says Brown already was in the office trenches when Medicare and Medicaid came along, and through dealing with claims daily, she has always predicted the next big change.
“She sees trends coming that the gurus in the higher echelons don’t,” Karen Busby says.

ggg
A “city girl” from Asheboro, Helen Brown grew up in a family of four children. Their parents were textile workers, and Helen was the first person in the family to go to college.
Her choices for her medical records major came down to Lees McRae, a two-year college then, or Duke University. She knew she could never afford Duke.
After only two weeks at Lees McRae, Brown was in the hospital, continuing to deal with a serious blood infection in her leg. A doctor’s care at Lees McRae eventually put her on the road to recovery, and she often wonders whether she was guided to choose the college.
“The Lord is up there helping us make decisions,” Brown says.
Helen first met Ralph Brown, a “country boy” from Randolph County, one Saturday night while he was home from the service.
They married in 1956. Helen eventually earned a two-year degree from Lees McRae and worked after graduation for the medical records department at the school.
She and Ralph lived briefly in Reidsville before he took a job as a math and science teacher at Boyden High School in Salisbury.
Even though they had a child less than 2 years old, Brown went to work for the Busby office in 1959 and has never looked back with regret.
To give you an idea of her staying power, she notes that Ralph Brown was Rudy Busby’s physics teacher at Boyden High.
Helen later earned her four-year degree in business administration at Catawba College while working full-time and raising two girls.
Today, daughter Kelly Lineberry is a teacher at West Rowan High. Daughter Stephanie Johnson lives in the Raleigh area.
Helen and Ralph also have six grandchildren and two great-grandchildren.

ggg
Rudy Busby told Brown in early January the practice would be closing.
Many significant changes would have been coming for the office. All the paper patient records would have had to be transferred to a computer database, and Busby figured he was not going to work long enough into the future to recover the costs of going completely digital.
Not that Brown, his office manager, was computer challenged. Hardly. She has been filing all of the patients’ insurance claims and doing all the office bookkeeping by computer for many years.
Brown says the older she became, the more she liked the little medical-office house, especially as everything changed around her.
After her daughters were grown, she never considered retirement. “What am I going to do if I don’t work?” she says she asked herself.
Now that retirement is here, Brown is pretty sure she’ll continue with her yard sales. She’ll find things to do for First Baptist Church, and she suspects she and Ralph will continue to start each morning with breakfast together and two newspapers.
“I may start looking for a job,” Brown laughs, “but who wants an 81-year-old person who walks with a cane?”
The self-imposed grieving has started.
“I’m going to miss my patients desperately,” Brown says. “I’ve been able to give them attention — attention and love.”
Contact Mark Wineka at 704-797-4263, or mwineka@salisburypost.com.