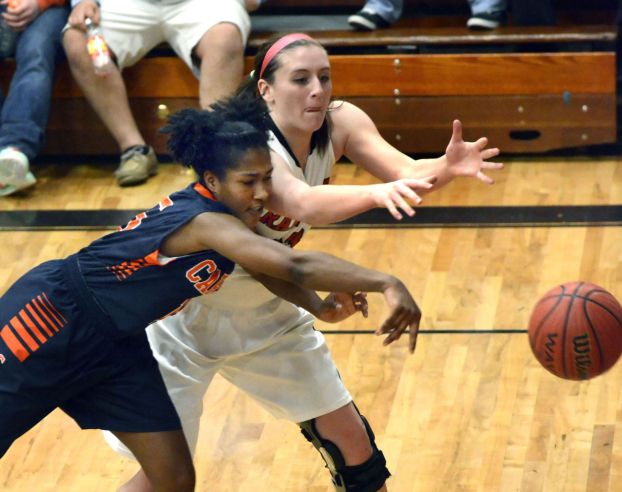 LANDIS — Without question, South Rowan truly survived Wednesday night’s battle with county rival Carson and now they get to advance to the third round of the State 3A girls basketball tournament.
The Raiders forced three Carson turnovers in the final 25 seconds and got the clutch free throws they needed from Avery Locklear to escape with a 56-54 win. South (18-9) now finds themselves in the third round of the basketball play-offs for the first time in 23 seasons (1991) and will hit the road on Friday to face Morganton Freedom (17-6) in the Western 3A sweet 16.
To advance to this point, however, the Raiders had to withstand a furious Cougar rally in the second half that saw them erase an 11 point margin to take the lead, 54-53 with just 25 seconds left.
South edged back ahead at 17 seconds on two Locklear free throws then the Raider defense forced a walk and a bad pass turnover to preserve the lead. Locklear, the junior guard, added another free throw with 1.6 seconds left and secured the two point win by intercepting a long inbound pass as time expired.
“That really felt good,” Locklear said after her 24 point night that included 8 of 10 foul shots down the stretch. “We want to go far in this thing so we put our heads down and just kept working.”
Carson (13-13) was coming off a big first round win over fourth seed East Rowan on Monday and kept it rolling against the Raiders. Trailing by 11 twice in the third period, the Cougars came to life behind senior sharpshooter Kate Cole and 5-10 forward Alex Allen to make a serious run down the stretch. Cole hit four threes, including three in the second half, to post a career high 22 points in her final high school game. Allen overcame foul problems for 13 points and 12 rebounds.
Allen’s jumper cut the South lead to one then Cole’s scoop with 2:10 left to play gave the Cougars their first lead since early in the first quarter.
Yet each time Carson scored, Locklear and South had an answer. Her layup and two foul shots made it 53-50 for South but Carson had one run left. Chrishona Roberson hit a layup then Jordy Clark had a putback shot to give them the 55-54 lead with just 25 seconds left. But Carson would score no more in the game as the late turnovers did them in. South had dodged a major bullet.
“I think we just stayed calm and didn’t let their run get in our heads,” stated center Lynsey Corriher, the Raider’s lone senior. She played a key role in the win in several ways with eight points, 11 rebounds, five blocked shots and a couple of steals. “This is such a good feeling to move on. I am so proud and it is overwhelming.”
For Carson coach Brooke Misenheimner, the loss did sting but she was very impressed with her team’s effort.
“I think this team has far exceeded anybody’s expectations and it stinks to lose,” she said, “ But we kept fighting and fighting and gave ourselves the opportunity to win. I think we have a lot to be proud of.”
It was a typical South-Carson battle, Raider coach Jarrod Smith observed. “We just made one more play than they did in the end.” he said. “But this has been a total team effort for us with everyone contributing. It is truly a close team and it is a joy to coach them.”
Now with two home playoff wins under their belts, the Raiders will have to hit the road to continue their quest for a state title. “It has been a long time for our school to advance this far and we are still so young.” Smith said. “Our girls don’t know what it is like because they have never been here before, but we will be ready.”