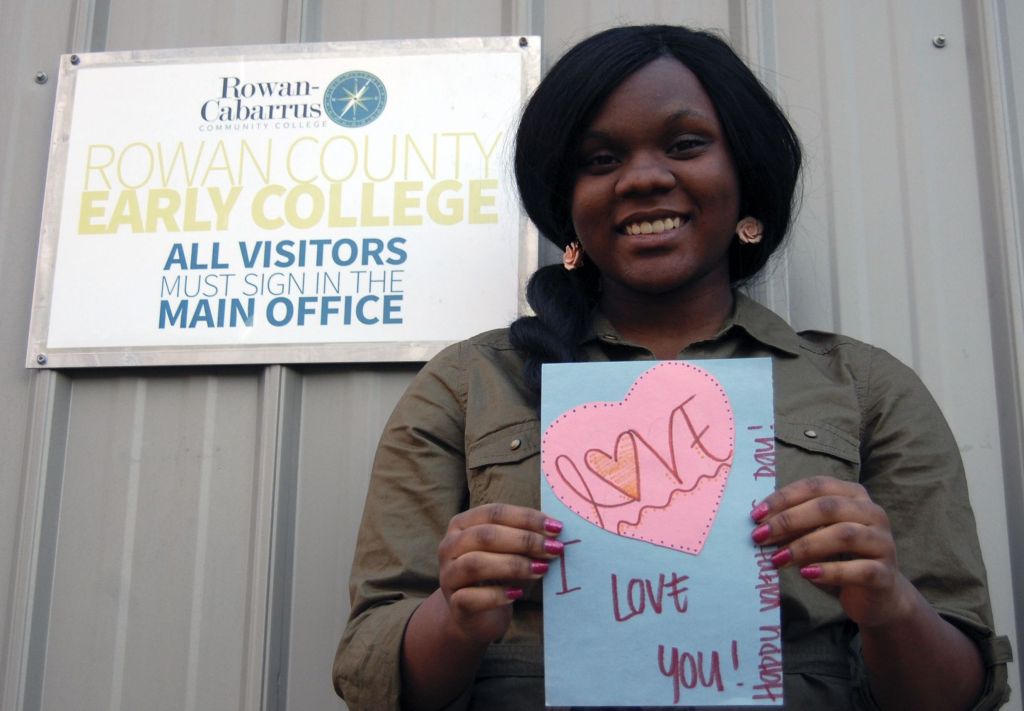 One Rowan Early College sophomore with a heart for service is making a difference, one project at a time.
Tiana Patterson-Pollard of Salisbury was the driving force behind the Early College’s recent jean drive that collected pants for poor and homeless youth, as well as the campaign where students created Valentine’s cards for homebound senior citizens.
“At my school, we don’t really get to do a lot of things and I really wanted to help out in the community,” Patterson-Pollard said.
Her inspiration comes from Do Something, an organization that encourages teens to make a difference in their community through service.
Patterson-Pollard said she was initially nervous about talking to her principal about the different projects their student body could do to make a difference, but she was so glad that she did.
He was a tremendous help, she said.
“Everyone was on board,” Patterson-Pollard said.
She decided that she wanted to partner with Do Something’s Teens for Jeans project. So, she organized a jean drive at her school. She collected more than 300 pairs of jeans to donate to needy and homeless youth.
The Teens for Jeans project has collected more than 3.5 million pairs of jeans so far. The campaign is in its seventh year and is sponsored by the junior’s clothing store, Aéropostale.
Patterson-Pollard asked Do Something organizers where the jeans would go, they told her they would probably end up in a larger city, like Charlotte. She wasn’t satisfied with that answer.
“I fought tooth and nail so that they would go here,” she said.
Her persistence paid off. Organizers assured her that some of the jeans would be donated to Rowan Helping Ministries right here in Salisbury.
“This is one of the things I’ve always wanted to do to help people,” Patterson-Pollard said.
She also headed up Do Something’s Love Letters campaign at Rowan Early College as well. The project links teens with local Meals on Wheels programs to provide handmade cards for homebound seniors. The Valentine’s cards are created by the community, and delivered to Meals on Wheels recipients.
The goal of the campaign is to foster a sense of community with older adults and ward off depression and isolation.
Patterson-Pollard and her classmates took time out of their day each Friday to create and decorate handmade cards, ending up with a total of 106. Do Something collected more than 250,000 Valentines.
She isn’t finished with service projects yet, either. Patterson-Pollard is heading up a sock drive, called “Cosy Toes,” at her church, Believers Beyond Borders Ministries.
g g g
Patterson-Pollard has big plans for the rest of her life.
She said she’d love to attend Wake Forest University.
“I want to major in law and be a lawyer and eventually a judge,” she said. “When I was younger, I was told that I loved to argue my case.”
That, combined with her endless drive to help people and a strong desire for justice, is why she said she’d like to pursue a career in the courts system.
Patterson-Pollard’s father spent most of her growing-up years incarcerated, she said. That experience also influenced her future career goals.
She wants to defend people and make sure everyone is treated fairly, even if they did the wrong thing.
“I want to do something to save people,” she said.
While Patterson-Pollard shows maturity beyond her years in her community involvement and future plans, she’s still a fun-loving 15-year-old girl.
“I love to dance and sing,” she said.
Patterson-Pollard is in a dance group called “The Future of Love.” They perform to inspirational music at church and community events, including a recent Kwanzaa event.
She said their goal is to perform dances that are appropriate for all audiences.
She also ran on the track team at Erwin Middle School.
Patterson-Pollard lives with her mother and brother, Tracy and Chris Patterson-Pollard. Her sister, Jasmine Parker, also lives in the area.
The family is tight-knit, but Patterson-Pollard is especially close with her mom and brother.
She said her mom is the most influential person in her life, and described her as a strong woman, with faith and character.
“We are just the closest thing ever,” Pollard-Patterson said. “I’m her shadow.”
Chris is a senior and West Rowan High School, where he’s on the football and track teams.
Patterson-Pollard said she’s always looked up to him and wanted to impress him. She even played football one year so she could be like him.
“He’s like my best friend,” she said.