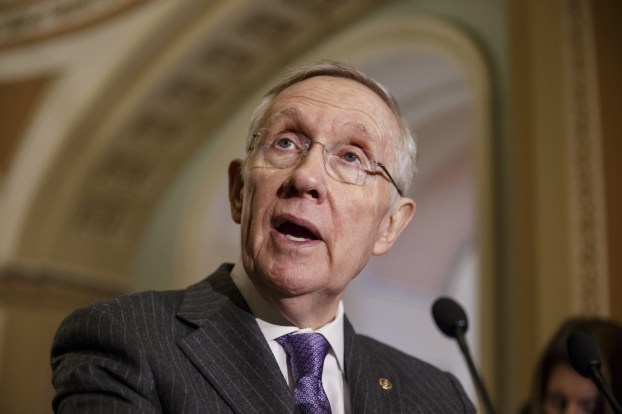 WASHINGTON (AP) — Senate Majority Leader Harry Reid said a $21 billion Democratic measure enriching health care, education and job-training benefits for veterans seemed headed for defeat Thursday, and he blamed Republicans.
Senate Republican leader Mitch McConnell countered that Democrats were miring the bill in election-year politics.
Both parties generally favor helping the nation’s 22 million veterans and their families, especially ahead of the November elections. The measure’s apparent demise underscored the political maneuvering that abounds this year, when Congress seems stalemated and able to achieve little.
This week, Republicans tried amending the veterans’ measure to make it less expensive and to add new penalties against Iran for its nuclear program. President Barack Obama strongly opposes that step, saying international talks on Iran’s nuclear program must be given more time.
Similar legislation drew 59 Senate co-sponsors, and an Iran vote potentially could embarrass the White House.
Reid, D-Nev., blocked a vote on the Iran amendment and others, and Republicans seemed ready to use a procedural move Thursday to derail the entire bill.
Reid said he hoped veterans groups were watching what Republicans were doing on the bill “because it will be defeated. That was their aim from the very beginning.”
McConnell, R-Ky., complained that Reid was denying Republicans a chance to help shape the legislation, and he said many lawmakers disagree with Obama’s approach to Iran.
“It’s shameful that Senate Democrats would seek to score political points by rushing to the floor a bill” Republicans weren’t given a chance to reshape, McConnell said.
Sen. Bernie Sanders, I-Vt., chairman of the Senate Veterans Affairs’ Committee, said Wednesday that it would be “extremely disrespectful to the men and women who have put their lives on the line” to block the legislation because of the dispute over Iran.
“The American people don’t want to see serious legislation sabotaged because of political partisanship,” Sanders said.
Republicans said Reid was shielding Democratic senators from a difficult vote.
“What Reid would like to do is take all the votes and push them past the November election,” said North Carolina Sen. Richard Burr, top Republican on the Veterans Committee.
It will take 60 votes to keep the bill alive, and that’s more than the 53 Democrats and two Democratic-leaning independents who are likely to go that way.
The bill would make many veterans without service-connected injuries eligible for treatment at Department of Veterans Affairs’ medical facilities. It would expand the dental, chiropractic and fertility treatments the VA provides, bolster programs for veterans who suffered sexual abuse and increase the use of alternative medicine such as yoga for stress.
More veterans would be eligible for in-state tuition at public universities. Some benefits for spouses of deceased veterans would improve, and aid to relatives caring for a wounded veteran would be expanded to include those who served before the attacks of Sept. 11, 2001.
The department would be required to publicly report more data on its handling of veterans’ benefit claims. That and other steps are designed to eat into the VA’s backlog of 390,000 claims that have been awaiting action for more than 125 days.