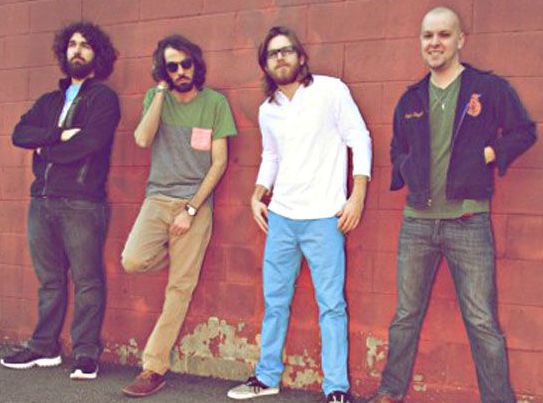 Their latest release, “Disguise the Limits,” out this month, is the fifth album by this young band. Many groups are lucky to produce five albums during their entire career. Time Sawyer has achieved this feat in only three years, with all band members still in their early 20s, and all the while keeping up a grueling performance schedule of live shows for their growing ranks of fans.

Time Sawyer’s efforts and reputation have garnered them an invitation to perform at this April’s Merlefest, the premier festival for traditional and contemporary roots musicians.

Sam Tayloe serves as lead singer and guitarist, Kurt Layell is lead guitarist, Houston Norris plays banjo and Clay Stirewalt is drummer for Time Sawyer. Each band member has mastered his quarter of the musical mix. Their ability combines with youthful energy to produce a fresh and fun sound.

As a team, they serve as ambassadors to the new world of music where boundaries have been erased and genres mix freely. The album “Disquise the Limits” is a diverse collection of folk, rock, bluegrass and alternative country with uncommon and personal lyrics.

The opening track, “Better Off” serves as a rousing overture to the album, weaving bluegrass with rock as if predicting the musical variety to come. That’s followed up with the laid-back rockabilly of the song “Appalachian Bound,” then immediately contrasted by the gentle warmth of track three, the love song “A Little Bluer.”

“How it’s Gonna Be” has a nostalgic vibe and a tenacious hook. Songs like “210” and “A Far Away Farewell from Rose” are nods to the folk ballad tradition.

In my opinion, the highest point of the album occurs a little half way through, with “Best Be Going.” The tight instrumentation and forward movement gives the listener a sensation of traveling, buoyed along with banjo and mandolin improvisation.

The song “Working Construction” stands out for its metaphoric lyrics. With the act of physically building something, you can see what you’ve accomplished, but how do you replace a missing piece in your life? The poetry of the song is framed by a setting of tone painting with an accompaniment suggesting the regular sound of a hammer.

Norris is a worthy promoter of the banjo’s increasing role in current music. A banjo is no longer just brought out when a folksy sound is needed; the instrument has come into its own. Norris demonstrates the banjo’s versatility in the album’s variety of genres, as well as the banjo’s usefulness as a solo instrument.

Tayloe is a confident front man for the band, a strong singer with a Dylanesque tinge who adapts his voice easily from style to style. He carries almost all of the vocal duties on the album, which has only brief splashes of harmony here and there. The band might benefit from striving to add more harmonies in the future to add some variety. Just as you wouldn’t want to eat cheesecake with every meal, you may not want to only hear the same soloist with every song, no matter how rich and delicious his voice is.

Likewise, even though Time Sawyer is a string band, they may want to consider throwing in some more instrumental variety in the studio. On this album’s penultimate track, “West from the Farm” there is a steady build in the accompaniment, then to continue the upward trajectory, brass makes its only appearance, along with some of the album’s rare vocal harmony. It creates a satisfying climax before winding up the album with “Tired of this Tired.”

The final song’s title might imply the exhaustion a touring band is likely to encounter. But the song is actually more of a lullaby, a gently rocking 6/8 with quiet steel guitar swoops underscoring lyrics contemplating the weight of the world rather than a personal weariness.

Time Sawyer can add their latest album, “Disquise the Limits” to the mounting evidence that this band is poised for take-off, and indeed for them, “the sky’s the limit.”

“Disguise the Limits,” (and all of the band’s previous albums) can be ordered at http://timesawyer.bandcamp.com

PPT to present ‘A Thousand Cranes’