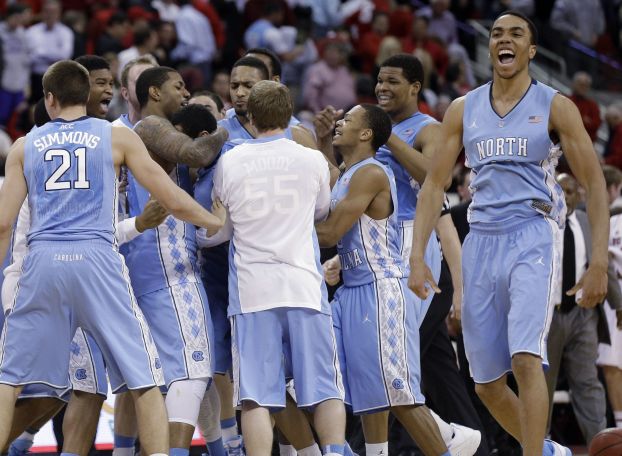 RALEIGH — Back and forth Marcus Paige and T.J. Warren went, knocking down shots and piling up points to turn the latest meeting between rivals North Carolina and North Carolina State into a can-you-top-this show.
In the end, Paige had the biggest shot to keep the 19th-ranked Tar Heels rolling through February.
Paige hit a driving basket with 0.9 seconds left in overtime to cap his career night and help the Tar Heels beat Warren’s Wolfpack 85-84 on Wednesday night.
Paige finished with 35 points — 31 after halftime — and seven 3-pointers for the Tar Heels (21-7, 11-4 Atlantic Coast Conference), who won their 10th straight. UNC needed every bit of that production to outlast the Wolfpack (17-11, 7-8) and Warren, the league’s leading scorer who finished with a career-high 36 points.
“It was quite a scoring exhibition by both of us,” Paige said. “It would be a knock to say that my teammates weren’t giving it their all, but at the same time, two great shot-makers were making a lot of shots.”
The Tar Heels were down 11 points in the first half and by six with less than 2 minutes left in overtime, but clawed back to win in a classic finish between nearby rivals that featured seven lead changes and seven ties after halftime.
Paige finished 11 for 21 from the field overall and 7 for 12 from 3-point range in 41 minutes. It marked the 12th time this season Paige has scored in double figures after halftime after scoring four or fewer points in the first half.
It was the most points by a UNC player since Harrison Barnes scored 40 in the 2011 ACC tournament semifinals against Clemson. It also marked the first time a UNC player hit seven 3s since Will Graves did it in the 2010 NIT final against Dayton.
“You appreciate the back and forth, but you appreciate it more by winning,” UNC senior Leslie McDonald said. “We just had to dig deep, and we drew up plays, and Marcus took us to the promised land.”
Warren finished 13 for 25 from the field and scored 26 points after halftime, with much of that coming against top UNC defender J.P. Tokoto.
“I had my floater working,” Warren said. “I just wanted to keep working with that throughout the game.”
The Tar Heels are on a 10-game winning streak for the first time since February 2009. And the win inched them closer to earning a top-four seed in the ACC tournament in Greensboro and the double-round bye that comes with it.
For the Wolfpack, it was a potentially devastating loss for a team fighting to improve its NCAA tournament chances. And it ended with several fans — irked all night by officiating — throwing debris on the court as the Tar Heels celebrated.
In the end, Warren and the Wolfpack fell a play short in a game that was statistically even in most areas.
N.C. State had control by scoring the first six points of the overtime, all from Warren, and taking an 82-76 lead on Warren’s basket over James Michael McAdoo with 1:34 left.
But Paige answered with a tough 3-pointer over Ralston Turner at the 1:25 mark, then hit two free throws with 41.6 seconds left to make it 83-81. The Wolfpack then got the ball to Warren in the backcourt, but with McAdoo and freshman Nate Britt closing in on a trap, Warren bobbled the ball out of bounds to set up McAdoo’s tying basket with 30.5 seconds left.
Warren — who hit two free throws with 1.5 seconds left in regulation to force overtime — had a chance to put the Wolfpack back up. But he made 1 of 2 free throws with 7.7 seconds left, setting the stage for Paige — whose team was out of timeouts — to drive the court and into the lane for the hanging layup over Warren.
“I think my teammates and I both knew, the way the game was going, the ball needed to be in my hands, whether I was going to shoot it myself or try to make something else happen,” Paige said. “Once I saw a window, the rest is history.”
Warren’s final desperation heave wasn’t close, sealing the Tar Heels’ 16th win in 17 meetings. It also marked the second time in four games that N.C. State had lost on a late basket to a ranked team, including the one-point loss at then-No. 1 Syracuse on Feb. 15.
“We’ve had a couple of near misses here that have been just gut-wrenching,” Wolfpack coach Mark Gottfried said.