Blue Bears succeeding on and off the court 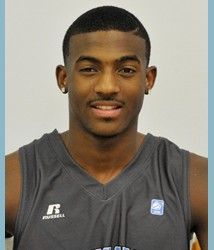 CHARLOTTE — If the Livingstone men’s basketball team’s off-the-court performance is any indicator of how well they’re going to fare on the court in this week’s CIAA basketball tournament, success just might be headed their way.
The Blue Bears were lauded this week for having the highest cumulative GPA among the 12 men’s teams that compete in the Central Intercollegiate Athletic Association. The award is based on the overall grade point averages of returning players from the previous season. Livingstone’s average was 3.02.
Livingstone takes the court today at 1 p.m. against CIAA foe St. Augustine’s University in Time Warner Cable Arena, in what the Blue Bears hope will be a repeat of last year’s tournament efforts – with one exception. Last year Livingstone was runner-up to CIAA winner Bowie State, losing to the Bulldogs 85-74.
This year Livingstone hopes to win it all, but for Head Men’s Basketball Coach James Stinson, Jr. and Livingstone President Dr. Jimmy R. Jenkins, Sr., the Blue Bears have already won where it matters most — in the classroom.
“Naturally I and my assistant coaches want our team to win,” Stinson said. “But by being recognized this week for having the highest grade point average among all of the CIAA schools, the players have already achieved success. Ask any of my players and they’ll tell you we stress academics. We talk about it in practice, in the locker room and when we run into them on campus.”
Jenkins said he couldn’t be prouder of the players for demonstrating what athletics should be all about.
“Everybody wants to win, and I would love for our players to be the team cutting down the nets when it’s all said and done Saturday night, but no matter what they do on the court this week our players have already made Livingstone immeasurably proud off the court,” Jenkins said. “I am very proud of them for how well they’ve performed academically.”
Senior point guard Mark Thomas of Saginaw, Mich., said Livingstone coaches always remind players they’re student-athletes, not athlete-students.
“They put a real emphasis on our grades,” said Thomas, who was named Saturday as the CIAA Player of the Year – a first in Livingstone history. “Grades are very important to me because my mother, Leslie Thomas, stressed education to me when I was a young boy. She never really had to say much to me about making good grades because it was just always understood that if I didn’t make good grades I would be disciplined when I got home.”
Thomas, a business administration major, has started in every game for Livingstone this season and led the CIAA in scoring with 21.2 points per game. In the Blue Bears’ 79-47 win over Lincoln he joined the 1,000-point club, he has recorded 22 double-figure games and he scored a career high 42 points against Fayetteville State University.
Senior shooting guard Jody Hill of Detroit, who joined Thomas in being named to the 2014 All CIAA Conference Team, concurred that academics are always stressed by Stinson and his coaching staff.
“Coach Stinson always said no matter how we’re doing on the court we’re going to make sure we have the best grades because at the end of the day people attend college to further their education and to get degrees and graduate,” said Hill, a sports management major. “He always says we’re students first and athletes second.”
Hill ranks fourth in the league in scoring, averaging 19 points per game. He recorded 21 double-figure games and scored a season high 37 against Chowan University.
Both men said they’re proud of the squad’s academic success and hope to match it with athletic accomplishments this week.
They enter the tournament as champions of the CIAA southern division for the second, consecutive year. Last year’s CIAA southern division championship was a first in school history. Also last year, Livingstone College earned a berth in the NCAA Division II playoffs for the first time.
“I’m grateful we had the highest grade point average, but we are here to play basketball this week, and it would mean a lot to the players, the coaches, the administration, the students and our alumni if we win the CIAA Tournament,” Hill said. “And it would mean a lot to me personally because it’s my senior season. After this year I won’t be able to put on another Livingstone College jersey, and I’m certainly not ready to take my jersey off.”