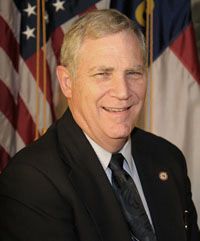 Harry Welch is looking to retain his seat as the county’s register of deeds after filing on the first day Rowan County Board of Elections officials started welcoming candidates.
Running as a Republican for his second term, Welch said originally he was a businessman with a communications background while running for political office — and he succeeded.
“I think I have a great staff. I’ve visited about 33 other (register of deeds offices) to see what their staff is doing, and I do believe we have the most professional and courteous staff I have seen,” Welch said.
Welch, 66, said he has saved the taxpayers “tens of thousands of dollars” over the past three years and he thoroughly enjoys working as the county’s register of deeds.
With a background in communications, Welch said the Federal Communications Commission was strict enough that he didn’t have a problem with the mandates set forth by the N.C. General Assembly when taking the position.
“I’m here not to make money, but to save money,” Welch said.
Welch and his wife, Terri, have three children and three granddaughters.
The couple also operates the county’s largest no-kill dog shelter, dubbed “All Dogs Great and Small Rescue,” Welch said.
“If the voters will keep me in office, I will save the taxpayers money,” Welch said.