Blind hiker who conquered Appalachian Trail to speak in Salisbury 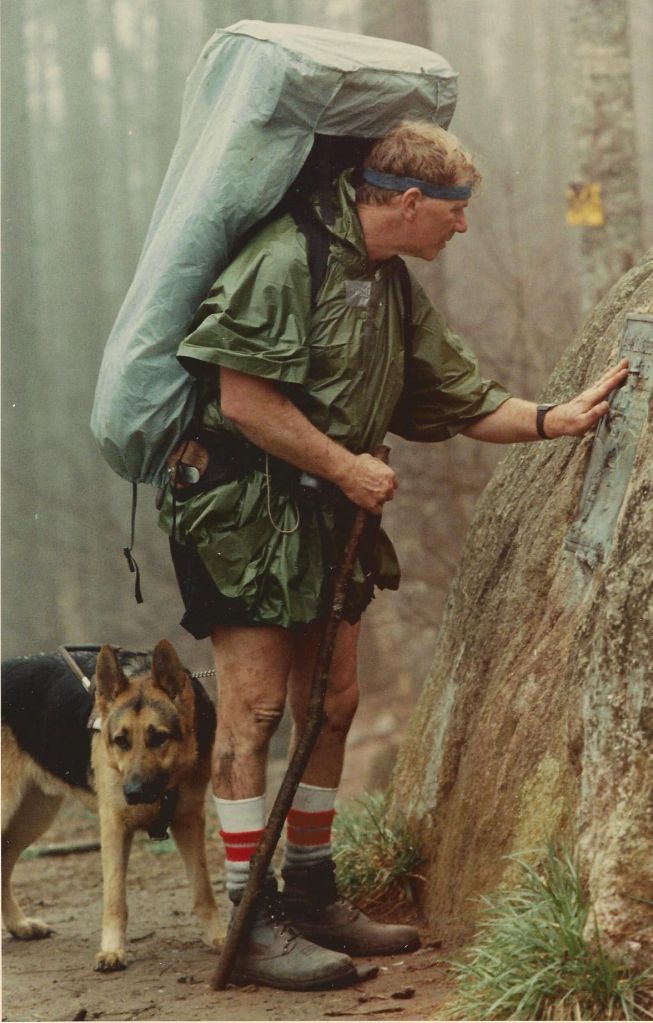 Try this simple experiment: Close your eyes and try walking across a familiar room in your house, keeping your eyes closed for almost two minutes.
Now imagine an additional 2,168 miles and six months over rough terrain, rocks, stumps, snow covered mountaintops and icy streams. Sounds impossible? Tell that to Bill Irwin, and he’d most likely smile and just keep walking.
Bill has become a legend among hikers, especially those who through-walk the Appalachian Trail. The former North Carolinian and his dog, Orient, set out on March 8, 1990, at the trail’s southern terminus in the Chattahoochee National Forest in Georgia. On Nov. 21, 259 days later, they arrived in the snows of Mount Katahdin in Maine’s Baxter State Park to the words of “Amazing Grace” sung by members of his church.
You see, Irwin is no typical hiker. Bill Irwin is blind, and Orient, his seeing eye dog was his guide.
Why would someone who could not see even attempt such a journey?
“For most hikers,” Bill says, “the rewards of the Appalachian Trail were primarily visual. People often wondered what rewards were there in the hike for me, since I couldn’t see any of that.
“‘Do you feel cheated?’ people ask, ‘because of all the beauty you can’t see?’ There were times I wished I could see what other hikers would describe to me. When Helen Keller was asked, ‘Can you see a world?’ she said, ‘I can see, and that is why I can be happy in what you call dark, but which to me is golden. I can see a God-made world, not a man-made world.’”
The trail goes through 14 states, eight national forests and about 60 state parks and gamelands. The total elevation gain of hiking the entire trail is the equivalent of climbing Mount Everest 16 times.
It is home to an impressive diversity of plants and animals. Bill says, “Orient didn’t usually pay much attention to animals; he is trained to ignore them. So when he came to a complete stop one day on a narrow portion of the trail … I became aware that whatever was standing ahead of us was grinding its teeth. It was either a very tense, very hungry through-hiker — or a bear.”
About 2,000 hikers per year attempt to through-hike but generally fewer than one in four succeed.
The day Bill began his trek was the third anniversary of his sobriety — an almost unimaginable milestone in the life of someone who had spent most of his 49 years as an alcoholic. So almost 15 years after losing his sight and a thousand days after putting the bottle down, Bill climbed into the back of a friend’s truck and headed for the trailhead.
He was ready to hit the trail; the only problem was finding it. The directions they had been given from the local gas station didn’t match those from the general store.
“If we couldn’t find the beginning of The Appalachian Trail in a truck,” he said, “how was I, a blind man, supposed to find my way to Maine on foot?”
Finally the driver said, “This is it,” and assured me I was directly in front of a tree marked with a single white paint stripe, two inches wide and six inches long.”
For the next 2,168 miles, those white blazes would mark the route not only of the trail, but of a journey of a lifetime.
“There I was,” writes Bill in “Blind Courage,” the story of his amazing walk, “49 years old and had been a heavy smoker until two years earlier. I didn’t have enough money to finance that kind of venture.
“I don’t like instant oatmeal, one of the main sources of food (hikers burn up to 6,000 calories a day). I don’t even like to hike. Besides all this, I was blind. Orient was trained for city streets, not mountain trails. No blind person has ever through-hiked the Appalachian Trail, and I sure didn’t feel ready to be the first.
“When the thought first occurred to me that the Lord might want me to hike the trail, I put it out of my mind. I told God He had the wrong Bill Irwin. “I’m the blind guy, remember?”
Apparently, Bill lost the argument — or he won it. “(My) job now is to show people how to be encouraged and not give up in times that seem hopeless. I use the Appalachian Trail as a metaphor for life.”
Bill Irwin’s life has been filled with pain and promise. Trying to cope with death, divorce, estranged family relationships and blindness is just the beginning of the story. Finally, a cry for help from a cocaine-addicted son forced Bill into a situation where he had to admit that his life was out of control.
Through 14 states and 2,168 miles, Bill and Orient walked and came back with a message: What starts out as a journey in the darkness can lead to the brightest of lights.
Bill Irwin will appear at the 10th Annual Sportsman’s Banquet at First Baptist Church on March 6, a Thursday, at 6 p.m. Tickets are $85 for a table of eight, $65 for a table of six, and $12 for individual tickets.
Contact Rod Kerr at 704-633-0431, or rod@fbcsalisbury.org, for reservations or information. Signed copies of “Blind Courage” are available for $25.