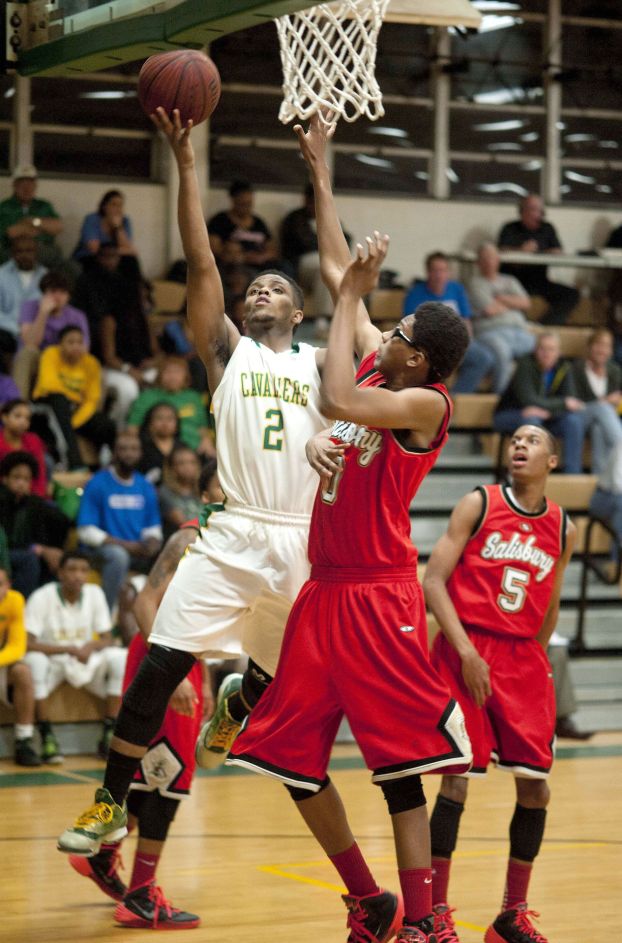 SPENCER — North Rowan head coach Andrew Mitchell admitted he was nervous by the playoff draw.
And for more than a quarter Monday night in Spencer, it showed.
But the Cavaliers eventually got into their offense and began to run, cruising past in-county rival Salisbury, 75-63, to advance in the 2A bracket.
“All wins are big at this point. It wasn’t pretty but we’ll take it,” he said afterwards.
“That was one of my biggest concerns to have to play an in-town rival in the first round of the state playoffs,” Mitchell continued. “A lot of times you can take that for granted and that’s what I think we did in the first half.
“It was scary to me to be honest. I didn’t like that draw at all.”
Beating a team three times in a row is hard enough, but make that team an cross-town rival and in the first round of the playoffs, the task is even harder. Salisbury took advantage of that and came out swinging on the road, going shot-for-shot with the Cavaliers. And, at least early on, North’s shots were coming from beyond the arc.
Alexis Archie buried North’s only three-pointer in the first quarter (1-of-9), which grabbed a 11-8 lead late in the frame.
“I don’t think we were mentally focused to come out and play,” Mitchell explained. “We were 1-for-9 from the 3-point line in the first quarter and that hurt us.
“I think we were trying to crush them early instead of working our offense.”
The Cavs put the ball on the floor in the second and began to assert themselves in the paint.
Michael Bowman hit a tough layup to open the period before Jalen Sanders converted a three-point play. Dalton Nelson then hit back-to-back shots and North grabbed a 20-10 lead.
The Cavs led by 15 (32-17) and never looked back.
“I just asked them if they wanted to play,” Mitchell said. “They bought into. I love this team because when we ask them to do something, they’ll get it done.” North pushed its lead out to as much as 22 in the second half before holding off a late rally to win and advance to the second round.
“I wanted to come over here and compete,” Salisbury coach Jason Causby explained. “I’m proud of my guys; I thought they really played their rear-ends off. There were times when we could have got blown out of the gym, but we kept coming. That shows some resiliency.
“Anytime you come into the game and you’re the lower seed, you want to play as well as you can and hope you catch somebody looking past you,” he continued. “Unfortunately, when these two teams get together, you don’t ever run the risk of that.”
Salisbury caps its season at 11-14, while the Cavaliers move on in the 2A bracket.
North will host hot-shooting East Lincoln Wednesday night. Tipoff time has not been determined.