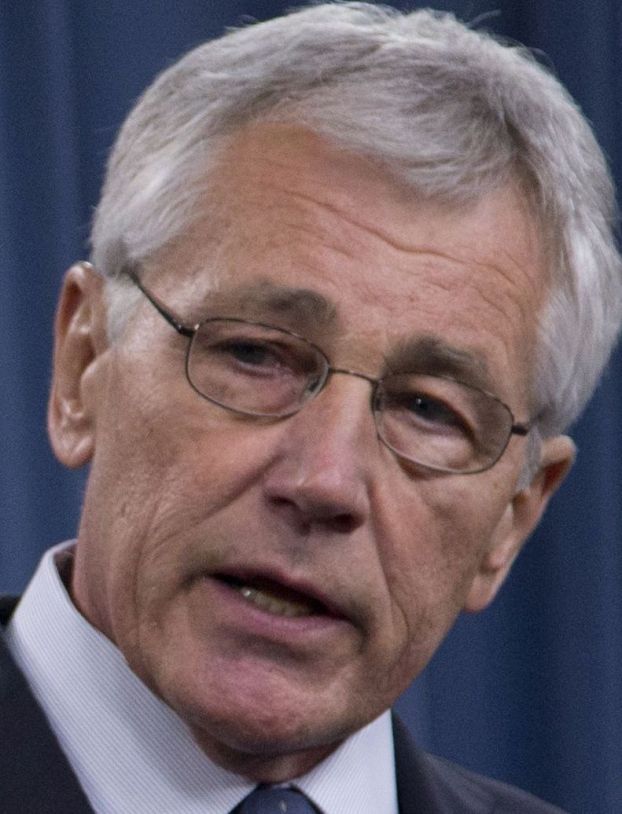 Hagel says US military must shrink to face new era

WASHINGTON (AP) — Looking beyond America’s post-9/11 wars, Defense Secretary Chuck Hagel on Monday proposed shrinking the Army to its smallest size in 74 years, closing bases and reshaping forces to confront a “more volatile, more unpredictable” world with a more nimble military.
The nation can afford a smaller military so long as it retains a technological edge and the agility to respond on short notice to crises anywhere on the globe, Hagel said. He said the priorities he outlined reflect a consensus view among America’s military leaders, but Republicans in Congress were quick to criticize some proposed changes.
In a speech at the one-year mark of his tenure as Pentagon chief, Hagel revealed many details of the defense spending plan that will be part of the 2015 budget that President Barack Obama will submit to Congress next week. Hagel described it as the first Pentagon budget to fully reflect the nation’s transition from 13 years of war.
At the core of his plan is the notion that after wars in Iraq and Afghanistan that proved longer and more costly than foreseen, the U.S. military will no longer be sized to conduct large and protracted ground wars. It will put more emphasis on versatile, agile forces that can project power over great distances, including in Asia.
Hagel stressed that such changes entail risk. He said, “We are entering an era where American dominance on the seas, in the skies and in space can no longer be taken for granted.”
However, budget constraints demand that spending be managed differently from the past, with an eye to cutting costs across a wide front, including in areas certain to draw opposition in the Congress, he said.
He proposed, for example, a variety of changes in military compensation, including smaller pay raises, a slowdown in the growth of tax-free housing allowances and a requirement that retirees and some families of active-duty service members pay a little more in health insurance deductibles and co-pays.
“Although these recommendations do not cut anyone’s pay, I realize they will be controversial,” Hagel said, adding that the nation cannot afford the escalating cost of military pay and benefit packages that were enacted during the war years.
“If we continue on the current course without making these modest adjustments now, the choices will only grow more difficult and painful down the road,” he said.
Although Congress has agreed on an overall number for the military budget in fiscal 2015 — just under $500 billion — there are still major decisions to be made on how that money should be spent to best protect the nation.
Early reaction from Republicans in Congress was negative.
“I am concerned that we are on a path to repeat the mistakes we’ve made during past attempts to cash in on expected peace dividends that never materialized,” said Sen. Marco Rubio of Florida, a possible presidential contender in 2016.
“What we’re trying to do is solve our financial problems on the backs of our military, and that can’t be done,” said Rep. Howard “Buck” McKeon of California, chairman of the House Armed Services Committee.
Another proposal likely to draw fire on Capitol Hill is Hagel’s call for a new round of domestic military base closings in 2017. In the years following the last round, in 2005, members of Congress fought to protect bases in their home districts and states, arguing that the process does not yield as much savings as advertised.

Among other changes Hagel proposed:
— The active-duty Army would shrink from today’s 522,000 soldiers to between 440,000 and 450,000 — the smallest number since 1940 when the nation was gearing up to enter World War II. The Army currently is scheduled to be reduced to 490,000.
The Army’s post-World War II low was 480,000 in 2001, according to figures provided by the service. In 1940 the Army had just 267,000 active-duty members, but that number surged to 1.46 million the following year as America prepared for war in Europe and the Pacific.
— The Army National Guard would drop from 355,000 soldiers to 335,000 by 2017, and the Army Reserve would drop by 10,000, to 195,000. The National Guard also would send its Apache attack helicopters to the active-duty Army in exchange for Black Hawk helicopters more suitable for domestic disaster relief missions.
— The Marine Corps would shrink from 190,000 to 182,000.
— The Navy would keep its 11 aircraft carriers but “lay up,” or temporarily remove from active service, 11 of its 22 cruisers while they are modernized. The Navy would reduce from 52 to 32 its purchase of littoral combat ships, which are smaller vessels designed to operate closer to shore.
— The Air Force would retire its fleet of A-10 “Warthog” tank-killer planes for an estimated savings of $3.5 billion over five years. It also would retire the venerable U-2 spy plane, which debuted early in the Cold War as a stalwart of U.S. intelligence.
Hagel built his case on what he called a foundation of realism. He quoted one of his predecessors, the World War II-era secretary of war, Henry Stimson, as saying Americans must “act in the world as it is, and not in the world as we wish it were.”
“This is a time for reality,” Hagel said. He emphasized that the period of explosive growth in defense budgets was over, making it more important to preserve a technological edge as other nations modernize their militaries. He made no direct mention of China or Russia, but both are investing heavily in their military capabilities.
“Budget reductions inevitably reduce the military’s margin of error in dealing with these risks,” Hagel said, adding that a smaller U.S. force “strains our ability to simultaneously respond” to multiple global crises.
He and Gen. Martin Dempsey, the Joint Chiefs chairman who appeared with him, both argued strongly against a return to the across-the-board congressional budget cuts known as sequestration that were partially suspended for the 2014 and 2015 budgets. Hagel likened a return to such cuts to “gambling with our military.” Dempsey, too, said those deeper reductions would have exceedingly harmful effects on the entire military.
“We’re all willing to take risks,” Dempsey said. “None of us are willing to gamble.”
Under a congressional deal passed two months ago, the Pentagon’s 2015 budget would be set at $496 billion — the same as in 2014. But Hagel said Obama’s overall budget proposal also will include a government-wide “Opportunity, Growth and Security Initiative” that would provide the Pentagon with an additional and separate $26 billion — assuming there will be no return to sequestration. He said the new money would be used for increased training and other partially neglected activities central to making the military ready for combat.
———
Follow Robert Burns on Twitter at http://www.twitter.com/robertburnsAP

Sure, it resembles a spider on steroids. But a recently developed flying robot — soon to hover over the Peruvian... read more