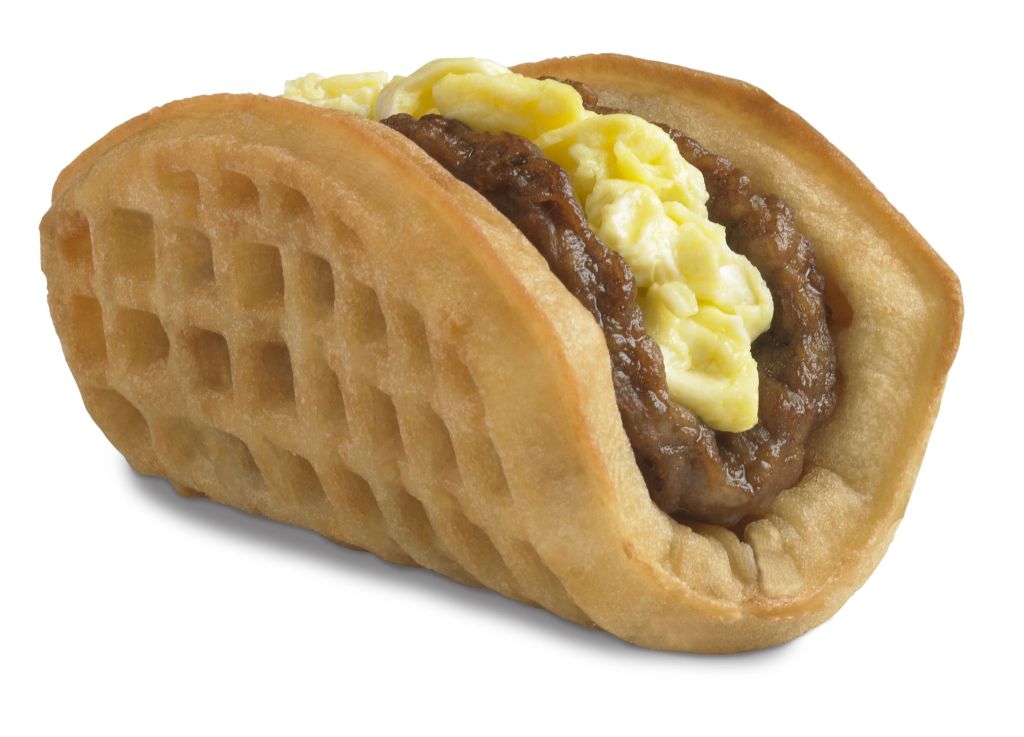 Egg McMuffin, meet the Waffle Taco.
Taco Bell is readying for the launch of its national breakfast menu on March 27, with items designed to appeal to its fan base of younger men. And the chain says breakfast will be available until 11 a.m. — a half-hour later than McDonald’s offers its Egg McMuffins.
“We can turn the breakfast conversation into a two-horse race,” Taco Bell President Brian Niccol said in an interview, noting that Taco Bell intends to be a “strong No. 2” after McDonald’s.
The items on Taco Bell’s breakfast menu are intended to be easy to hold and eat on the go. They include:
• A.M. Crunchwrap — scrambled eggs, a hash brown, cheese and bacon, sausage or steak in a flour tortilla.
• Waffle Taco — a waffle wrapped around a sausage patty or bacon, with scrambled eggs and cheese, served with a side of syrup.
• Bacon and Egg Burrito — Bacon, scrambled eggs and cheese wrapped in a flour tortilla
• Sausage Flatbread Melt — A sausage patty topped with cheese wrapped in a flatbread and grilled.
McDonald’s has long been the fast-food leader in the mornings, with its popular Sausage Biscuits, Hotcakes and other items pulling in roughly 20 percent of the company’s U.S. sales. But the chain has been facing stiffer competition over the years.
On March 4, Starbucks also plans to roll out new and revamped breakfast sandwiches, including a croissant sandwich with ham, cheese and egg.
The president of McDonald’s USA, Jeff Stratton, said the chain is in the early stages of looking at whether it can extend its breakfast hours. Stratton noted that cutting off breakfast on the weekends at 10:30 a.m. “doesn’t go very well” with people in their 20s and 30s in particular.
— Associated Press

Food festivals coming up
• Tickets are now available for the 29th Annual Hilton Head Island Wine & Food Festival, presented by Taste of the South. Events will spant March 10-15, including the Grand Tasting and Public Tasting. For more information, go to www.hiltonheadwineandfood.com.
• Gray Stone School in Misenheimer is planning an April 12 fundraiser called “A Taste of Gray Stone,” an evening of local wines and eclectic foods. Look for details at www.graystoneday.org.
• The Triangle Beer & Bacon Fest in Cary on March 29 promises an “all you care to taste” extravaganza complete with craft beers paired with “the food of the Gods: BACON.” For more info, go to — what else? — beerandbacon.com.
Bacon for everything — almost
Speaking of bacon, amid February’s emphasis on heart health and better nutrition, Food Network magazine hit the stands with “The Bacon Issue.” The March issue of the magazine has bacon recipes for everything from Spaghetti Carbonara to Bacon Shortcakes with Peanut Butter Whipped Cream.
There are even lollipops — so you can be a “sucker for bacon.”
But bacon’s not good for everything, one magazine staff member found out. “Test Kitchen Manager Claudia Sidoti tried infusing alcohol with bacon,” the magazine says, “and found it to look ‘like a scary science project.’ ”
Pseudo olive oil?
SIMIZA, Greece — If proposals from a government funded study are adopted, olive oil blended with cheaper vegetable oils will soon go on sale as part of an effort to modernize Greece’s economy.
One pro-government lawmaker called the proposal a “cause of war,” while olive producers in the fabled hills of the southern Peloponnese region worry that Greece could spoil its own signature product.
Illegal under current Greek law, the new product would need to prominently carry the label: “blended olive oil.” EU law does not prohibit blends, which are sometimes used in canned food, including in Spain, the world’s largest olive oil producer.
“Greece would lose its monopoly on quality,” olive grower Aris Kolotouros said. “It would create a faceless product.”
Not everyone is so pessimistic.
Financial analyst Vangelis Agapitos said the idea could work as long as labeling is clear, and could even help Greek companies reach markets such as China where consumers are becoming more familiar with Western goods.
“We’re in a situation where the market for olive oil is expanding dramatically, and I don’t think the current supply of olive trees can match the additional demand for olive oil in the foreseeable future. So if that means blending it, that’s not a problem providing it’s properly labeled and priced,” he said.
— AP

Quote of the week
“The secret of good cooking is first, having a love of it. … If you’re convinced cooking is drudgery, you’re never going to be good at it, and you might as well warm up something frozen.”
— James Beard