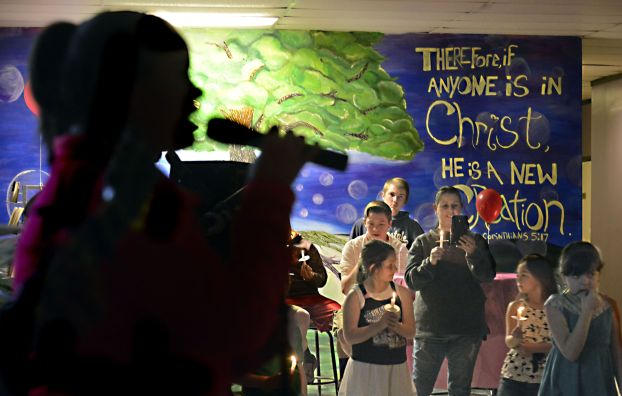 KANNAPOLIS — Most of the people gathered inside Breakthrough Faith Church never personally met Erica Lynn Parsons nor had they ever met anyone in her family, but they did have one priority Monday night — celebrate her 16th birthday.
Parsons has been missing since November 2011, but was reported missing on July 30 by her adoptive brother, James “Jamie” Parsons. The teenager disappeared and has been on the hearts of many in the community since her story was thrust into the public spotlight. Her adoptive parents, Sandy and Casey Parsons, say they gave Erica permission to live with a woman they believed was her biological grandmother in Asheville. The grandmother, Irene Goodman, a woman whom they knew as Nan, met them at a Mooresville fast food restaurant.
They say that was the last time they saw Erica. Law enforcement officials say Goodman doesn’t exist and the Parsonses have repeatedly been untruthful.
Birthday co-organizer Echo Wilson said she wanted to give Erica a birthday because no one knows “the last birthday she celebrated.”
She is a second cousin of Erica’s through her adoptive family, Wilson said.
Wilson has said she still talks to people in the community who’ve never heard about Erica and this event is just another way to keep her name and face out there. She would’ve like to see more people attend, but is pleased with the overall celebration.
Casey’s sister, Robin Ashley, attended the birthday celebration. She quietly came into the church, located on North Cannon Boulevard, and sat in the back along with an unidentified woman. The two women stayed through the lighting of the candles and a chorus of “Happy Birthday.”
“I’m just here to support Erica,” Ashley told a Post reporter.
“We’re just getting together to celebrate her to keep her in the forefront of everybody’s mind,” said Pastor Jeanna Cloke.
She said the church prays for Erica and she asked that the community continue to pray for Erica.
Shelby Smith and her daughter Alexis, 11, attended the celebration at the insistence of Alexis, her mother said.
The two have followed the Erica Parsons story and as Alexis put it, “felt it was my place to come here.”
Scott Bradford is part of a community group, some of whose members attended the celebration. He was grateful to the church for hosting the event, which he said was a good cause.
When Wilson asked Alisha Cáceres, owner of Dulce Temptations, a Kannapolis bakery, to provide some sweet treats for the celebration, she didn’t hesitate. Cáceres made cupcakes for the party.
“I was more than glad to help. It’s sad. It’s great they’re celebrating,” she said.
Cáceres said events like the celebration bring continued awareness to the case and gives the community an opportunity to “reach out.”
“We should keep celebrating,” she said.
Members of Second Chance, a Kannapolis ensemble made up of musicians from various local churches, performed several songs. The bands members — Kyle Winecoff, Mike Howard, Jeff Trivette and Hayleigh Harker bellowed out a few fast tunes and a couple of ballads. Lead singer Kathy Jo “KJ” King was unable to attend.
Winecoff said it was a special honor to worship at the service for Erica’s Sweet 16 birthday celebration. Various members of the group have followed the Erica Parsons story from the beginning.
Drummer Mike Howard said fundraisers and special events like this are near and dear to him. He hopes that just hearing about Erica Parsons will stop abuse from occurring or encourage others to report missing children sooner.
Anyone with information about the disappearance of Erica Lynn Parsons is asked to contact the Rowan County Sheriff’s Office at 704-216-8700 or the FBI Charlotte office at 704-672-6100.
People can also contact the nearest American Embassy or Consulate, or submit a tip on the FBI’s website https://fbi.tips.gov

A local church is hosting a public birthday party for missing teenager Erica Lynn Parsons on the day she would... read more