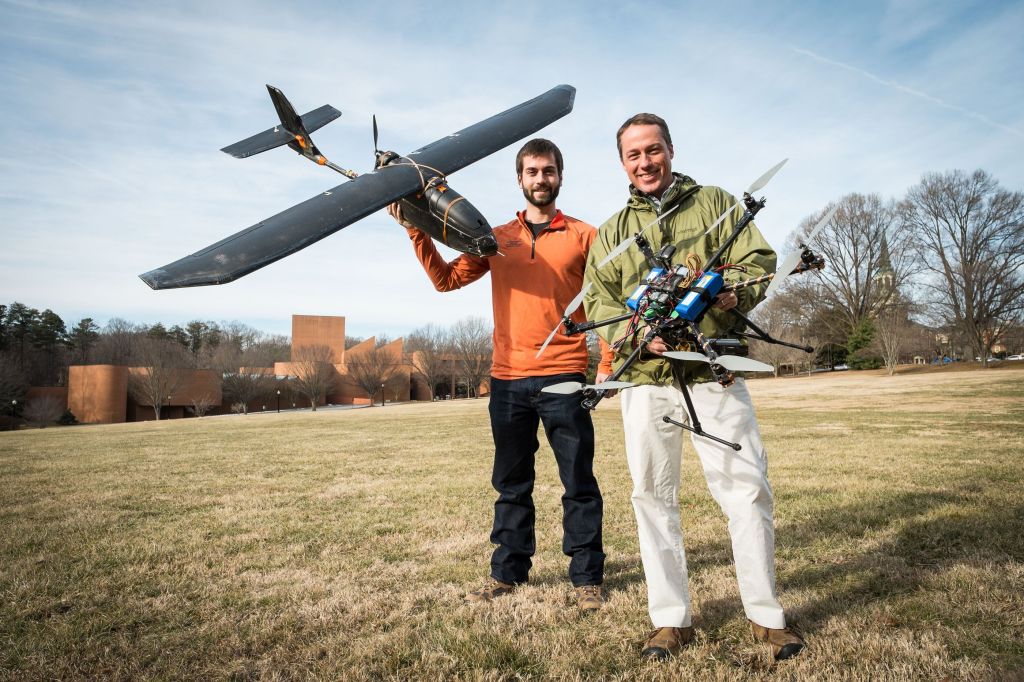 Sure, it resembles a spider on steroids. But a recently developed flying robot — soon to hover over the Peruvian cloud forest for the first time — has potential benefits for everyone.
About a year and a half ago, a small team of Wake Forest researchers came up with the idea of using drones (also called unmanned aerial vehicles, or UAVs) to gather forest canopy data in the western Amazon region of South America. The area, approximately 3,000 miles wide and home to an estimated 390 billion trees, is a major catalyst for Earth’s climate and weather patterns.
The researchers’ goal: to better understand and predict the effects of climate change, which many scientists say threatens our ecosystem and water supply.
“One thing a lot of people may not realize is that trees put an immense amount of water vapor into the atmosphere,” said Max Messinger, a Salisbury High School graduate and Wake Forest biology graduate student who assembles the drones. “A full-size oak tree can put out 50,000 gallons of water a year into the atmosphere — so when you start to think about on an Amazon Basin scale, you have a global driver of precipitation.”
Leaf canopy temperature is a key component in the research, Messinger said. He presented data on the subject to the American Geophysical Union in San Francisco in December.
“Water that’s put into the atmosphere in the Amazon affects precipitation and temperature over the entire globe. So by getting a better understanding of leaf temperature under differing climate conditions, we can better understand how much water they’ll put into the atmosphere, how much CO2 they will take out of the atmosphere, and hopefully get a better understanding of what kind of effect that will have on climate if the temperature increases by two or three degrees.”
The Peruvian cloud forest’s ultra-remote location — on the slopes of the Andes Mountains, on the western border of the Amazon rainforest — is difficult enough to get to, let alone conduct research. In addition, Miles Silman, a biology professor at Wake Forest and director of its Center for Energy, Environment and Sustainability, said satellite data on temperature and thermal distribution in the Amazon don’t provide the necessary resolution for building sophisticated data models.
So Silman, Messinger and Marcus Wright, a Wake Forest chemistry lab manager, conceived the idea of a drone that would be equipped with high-tech cameras and sensors. They applied for a grant and got funding from CEES and the National Science Foundation to assemble and test two different drones to use in the cloud forest.
Using global positioning data, compass coordinates and onboard stabilization systems, the researchers enter the pertinent information into mission planning software, which generates the flight plan and relays it to the aircraft. They then flip a switch to launch the drone.
Both versions of the drone have the capability to take pictures from various vantage points, resulting in data that allow researchers to build three-dimensional models for lab study. Both have their strengths and drawbacks.
The spider-like vehicle is an opticopter — an eight-motor, multi-rotor UAV that’s powered by standard hobby-grade batteries. “Before June 2012, there were just a couple people using these,” Silman said.
The opticopter, measuring about 3 feet across, can reach speeds of about 15 mph for up to only 20 minutes at a time. Its key asset is its ability to carry a conventional visible light or thermal imaging camera to gather data on temperature readings, leaf and flower characteristics, and even animal behavior.
The second and more conventional robot resembles an airplane, albeit with just a 6-foot wingspan. Fueled by a single electric motor, it can fly up to 50 mph for more than an hour – but it can’t carry the sophisticated sensors the opticopter can.
The researchers consider these factors, along with research goals, when deciding which drone to use.
“We choose different research questions and then we choose the appropriate UAV to fly that,” Silman said. “So in the mountains, with the thermal stuff, we’ll be having an opticopter with the multi-rotors and the thermal camera. When we’re out in the lowlands, we’ll be flying (drone) planes over vast areas of tropical forests, looking for illegal mining, and setting baselines for the kinds of vegetation affected.”
Silman and Messinger are excited about seeing the opticopter and airplane in action in Peru for the first time later this year. “We’ll be going to Peru every year, if not a few times a year, to do all sorts of different research,” Messinger said.
They enjoy being pioneers of sorts: “The drones stuff with respect to climate change is new,” Silman said. “But lots of people are getting into (drones) in ecological research. We were one of the earliest to get into it. There are so many potential uses in research. The field is exploding.”
Added Messinger: “The nice thing is that even though there’s a significant number of people working with this, there are such diverse research goals between the different labs that are using them that… we’re looking at different habitats. We’re trying to learn about different things.”