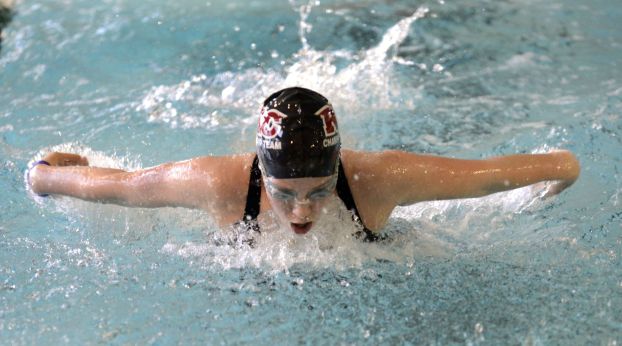 KANNAPOLIS — You might not expect to find hundreds of people going out swimming on a Sunday in February.

But the cause that drew scores of swimmers to the water in Kannapolis and Concord, and around the world, is one that participants in the Rotary Global Swimarathon say is worth fighting for.

It’s the third year of the international fundraiser for Rotary International’s Polio Plus campaign, with a goal of wiping out the crippling disease.

At the Kannapolis YMCA, 26 swimmers checked in during the first hour.

Ed Tyson, of the Kannapolis Rotary Club, said he’d heard about the program from members of the Cabarrus Club and invited them to speak in Kannapolis.

After hearing the presentation on the Swimarathon two weeks ago, club member Dr. Eric Atkinson helped coordinate a group of Kannapolis residents to take part in a two hour event.

“It’s good to be able to contribute in some small way to all the rotary clubs working together to eradicate polio around the world,” Atkinson said.

At least $150 had been collected so far, and more donations were anticipated, Atkinson said.

Brett Crosby, executive director of the Kannapolis YMCA, brought his sons Carter, 7 and Grant, 3, to take part. All three completed the five laps they had pledged, then stayed to splash around with others.

“We’re excited. We’ve got nowhere to go but up as far as growth. It’s great to be part of something bigger,” Crosby said.

“It’s good to be swimming for a good cause, to help people,” said Breanna Miller, of Salisbury.

She heard about the Swimarathon from a friend in the Rowan Aquatic Club.

“This was great for a quick event, put together by some great Rotarians,” Kannapolis Rotary Club President Joe Trull said.

The Rotary Global Swimarathon started in 2012. Organized by a Rotary club in the United Kingdom, the first event raised $105,000 and set a new Guinness World Record for the most number of people swimming simultaneously in a worldwide event.

It’s not clear yet whether that record was broken around the world Sunday.

But Rotary clubs around the globe had registered to participate. This year’s fundraising goal is $333,333.

The Bill and Melinda Gates Foundation has offered to match the money raised on a 2-to-1 basis.

If the Swimarathon reaches its goal, a total of $999,999 will go to Rotary’s global polio prevention efforts.

The Kannapolis Rotary Club got involved after a presentation two weeks ago from the Cabarrus County Rotary Club, which took part in last year’s Swimarathon.

Barbi Jones, co-chair of the Cabarrus Rotary Swimarathon committee, said her club had 92 people pre-registered as of Sunday afternoon.

Last year, Jones said, 140 swimmers came out with no preregistration.

“We have swimmers of all ages, all abilities,” Jones said in a phone interview.

One woman who had registered to swim is close to her 90th birthday, “and I think we have a couple of two-year-olds and three-year-olds swimming with their families,” Jones said.

“We’re thrilled. This has been so well-received by everyone we have shared it with,” said Lisa Perry, co-chair with Cabarrus County Rotary.

As people have learned about this, more have gotten involved. “It’s really exceeded our expectations,” Perry said. “Our fund-raising goal is $2,000 and we’re already almost there.”

Perry said it was a great feeling, knowing that she was taking part in an event that’s going on across the world.

“Every club does something a little different, but we’re all with the same purpose, which is to raise money to eradicate polio,” Perry said.

Likewise, Jones said it was great for local Rotarians and members of the public to know about the worldwide push to wipe out the crippling disease.

“We want them to know that Cabarrus County cares, and that we can include the whole community in this,” Jones said.

Across the Pond: Southern hospitality, British charm on display at Fulton Street bed and breakfast

SALISBURY — With a combination of Southern hospitality and British charm, Andy and Mary Walker have opened a bed and... read more