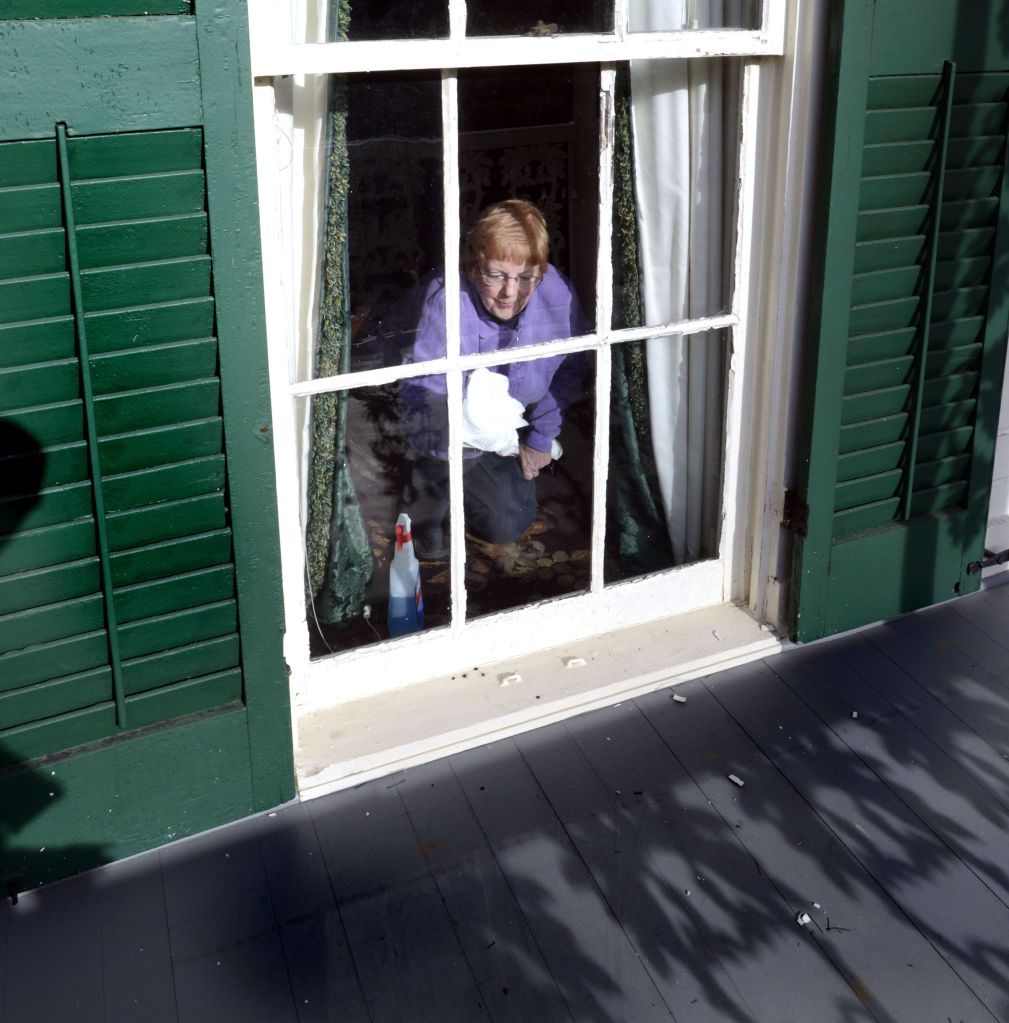 SALISBURY — The recent warm weather has the first iris leaves already popping through the ground of the herb garden at the Hall House.
And 15 Historic Salisbury Foundation volunteers rolled up their sleeves Saturday to get the house and grounds ready for the start of the tour season next weekend.
The Hall House, built in 1820, was originally a school.
Today, it’s a museum — preserving antiques as well as memorabilia from Dr. Josephus Hall’s career as a doctor, and the three generations of Hall family members who lived there.
Brian Davis, executive director of the Historic Salisbury Foundation, said the Hall House began closing to tours in the winter months due to utility costs and the low number of tour guests.
Although the house is cleaned regularly, Davis said this “spring cleaning” is a way to keep the antiques well-preserved, and the house looking its best.
It takes care and patience to keep the house and its contents in working order.
In one room, Dane Hartgrove used a beeswax-based furniture polish to clean and shine a desk.
The polish, Hartgrove said, is designed to preserve the original finish of the wood without damaging it.
Elsewhere, Davis worked to assemble memorabilia for a display, while volunteers cleaned furniture, wiped down the windows, and arranged items in preparation for the who’ll walk through the doors in weeks ahead.
There are some new items on display, recently returned to the Hall House, Davis said.
When the home was sold to the Historic Salisbury Foundation in 1972, Davis said, the owner gave some items from the Hall family to friends and family.
They include a Chinese decorative screen and a carved jade panel and some china.
“All of that came from China, from a relative who was over there after the Boxer Rebellion,” Davis said.
There are other newly-repaired items back on display, including a French wine glass that had been broken.
“We also received a cookbook that was in the family, from the time of Dr. Hall,” said Nancy Bilson with the Historic Salisbury Foundation.
It’s a collection of recipes gathered from friends and family, some with notations telling whose recipes they were, Davis said.
The book, which is very fragile due to its age, is being stored at the foundation, Davis said.
He said they’ll look into the possibility of scanning in the pages so that visitors can see the recipes.
As the cleaning continued inside the house, more volunteers were seeing to the grounds and gardens.
Wearing gloves and kneepads, Leslie Black pulled weeds and dead growth out of the herb garden just outside the house.
“The weeds don’t have any trouble surviving the winter,” she said.
Meanwhile, perennial herbs, such as mint, have to be kept in check, Black said.
Planting for the new year’s crop of annuals won’t happen until after April 15, once the danger of frost is past, Black said.
“This is my seventh year to do the herb garden,” Black said. “It’s a labor of love.”
Her husband, Doug Black, and student volunteer Matt Chilton pruned the hedges behind the house.
Chilton, a student at Gray Stone Day School, said he’s been involved with the local chapter of the Children of the American Revolution, but this was his first time working at the Hall House.
Doug Black said there wasn’t any need for major structural work at the Hall House, and the canopy trees are in good shape.
“We watch for bugs, anything that looks bad,” Doug Black said. “We look for limbs that are out of place, and we cut them.”
The long-term maintenance program that the foundation has in place has made allowance for most of what will need to be done at the Hall House in the years ahead, Black said.
Bilson said the volunteers, including the docents who will lead tours once the house reopens, are motivated by a love of history.
There is still a need for docents, Davis said, as well as volunteers who’re willing to get involved in the work of historic preservation.
“The more community involvement we have, the better,” Davis said.
The Hall House is open to the public on Saturdays and Sundays from 1 to 4 p.m., starting March 1.
Admission is $5 for adults, and $3 for children ages 5 to 12.
More information is online at www.HistoricSalisbury.org.