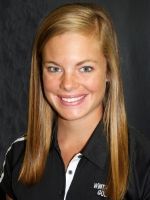 Golf takes Lee across the pond

SALISBURY ­— After staring on the links at Salisbury High School and Winthrop University, Allison Lee is taking her game to where the sport got its start.
Lee was accepted into graduate school at the University of St. Andrews in Scotland, where she will also play on the school’s club-level golf team, starting this fall.
“I studied abroad at University of Sterling a while back, which is a smaller school about an hour and half away from St. Andrews,” Lee explained. “We went on a bunch of weekend trips with the program I was enrolled in. When we went to St. Andrews, obviously the golf side really attracted me. I was just mesmerized by the school and the old golf course. I looked it up when I got home to see how to apply.
“I applied in October and found out in January that I got in.”
After finishing her sports management degree at Winthrop, Lee will enroll in the management program at St. Andrews to “gain a broader perspective on the business field.”
“Since I had a sports management degree as my undergrad degree, I really wanted to have a broader perspective on the business field and go with a general management degree,” she said. “The school seems to be a perfect for me.”
As for the golf aspect, Lee still has a year of NCAA eligibility of remaining after redshirting her freshman year at Winthrop, allowing her to compete overseas.
“I didn’t know how [eligibility] translated internationally,” she said. “They have a club team, which is equivalent to our NCAA teams. They worked with me and told me that I would be a good match to play for them.”
One of the parameters for the scholarship requires her to help out with the lower-level golf programs at St. Andrews, which parlays perfectly into her career.
“When I’m there, the way the scholarships work out with the golf team is you help with the junior golf program,” she explained. “There are seven or eight courses at St. Andrews, so when you’re not practicing, you’re helping out with the junior program.
“I’m hoping to go in the golf industry in some capacity after I graduate,” Lee continued. “I don’t have something penned down quite yet. I’m still trying to learn. But I do always want to give back to junior golf because that’s where I began.
“I think it’s extremely important. The lessons that golf teaches are something that no other game to really teach. So whatever I do, I want to be involved in the junior golf program.”
Salisbury co-athletic director and golf coach Dale Snyder, who coached Lee and the Hornets to back-to-back state championships in 2005-06, believes there isn’t a better person to represent the school or the community overseas.
“I can’t think of a better representative than her. She’s hands-down the best as far as I’m concerned,” he said emphatically. “This will not be a wasted venture on her. She will take it and run with it and make the most out of it as she can. It’s going to be a great experience for her, and I can’t think of a better person to do it.
“She’s a great kid from a great family. I’m very proud to say that I was her coach. She’s one of the ones that makes me proud to do what I do.”
Lee is currently raising money to make her dream come true. As of publication time, she has raised $2,370 on her account at Go Fund Me, still shy of her goal of $7,000.
“It’s a once-in-a-lifetime opportunity,” she said. “I didn’t make this decision lightly. I was really up in the air about it for a while because of the money. I just felt like in 20 years if I looked back on and I didn’t give it a shot, I would regret it because it is such an opportunity.
“Anywhere I go, I talk about my town and North Carolina,” she added. “I’m hoping to bring a part of what this town means to me and what the state means to me to Scotland. I hope people will ask where I’m from and that they’ll want to learn about me.”
To donate or learn more about Lee’s journey to Scotland, visit www.gofundme.com.

Roco wrestlers move on to Saturday