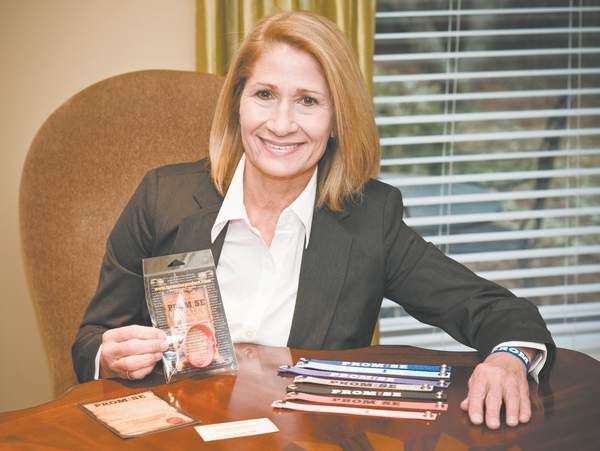 SALISBURY — A trademark dispute between a Catawba College professor’s I Promise Project and a venture connected to NBA star LeBron James has ended with a settlement.
In a press release, Catawba College business professor Dr. Pamela Thompson said her company’s iProm!se bracelets — an educational tool designed to help young people keep their commitments — would coexist alongside the similarly-named “I Promise” bands marketed by the LeBron James Family Foundation.
The details of the settlement between Thompson’s company, LBJ Trademarks LLC and the LeBron James Family Foundation are not being disclosed, Thompson said.
Thompson launched the project and her iProm!se bracelets in 2010 with backing from Food Lion co-founder Ralph Ketner and others.
The iProm!se bracelets — with the exclamation point in place of the second “i” — were named that way to be unique from other products, she said.
“Right now, we have an amicable settlement agreement, and I retain the rights to use iProm!se with an exclamation point,” Thompson said in a phone interview Saturday.
Thompson said her students began noticing the similar “I Promise” bracelets in 2012.
The website Timetopromise.com features those bracelets, as well as links to “LeBron’s I Promise Journey” and other information from the foundation.
When an attempt to contact the attorney listed on the LBJ Trademarks LLC trademark application for the “I Promise” bands met with no success, Thompson said she sought out a trademark attorney.
Months of negotiations followed, she said, leading to the settlement announced in a press release Friday.
“I am so thankful, honestly, to have had this opportunity to experience something like this,” Thompson said.
She said she’s sharing what she’s learned from the experience with her students.
One major lesson she’s learned, Thompson said, is the importance of registering one’s trademarks.
“What I have are common-law rights to iProm!se,” Thompson said.
Small business owners “have to be very, very diligent” to know whether someone else may be using the same trademark or a similar one, she said.
“My first advice would be to always register your mark,” Thompson said. “I think that a small business owner may feel like, ‘Maybe I don’t need to do that.’”
Likewise, for those who have created a unique process or product, Thompson said, applying for a patent is essential.
And those who create music or other intellectual property should get a copyright for their works, Thompson said.
Thompson said she’s a fan of LeBron James, and appreciates the work the LeBron James Family Foundation is doing to help children.
And, Thompson said, her I Promise Project and its iProm!se bands will also continue to do a lot of good in the future.
Contact Hugh Fisher via the editor’s desk at 704-797-4244.