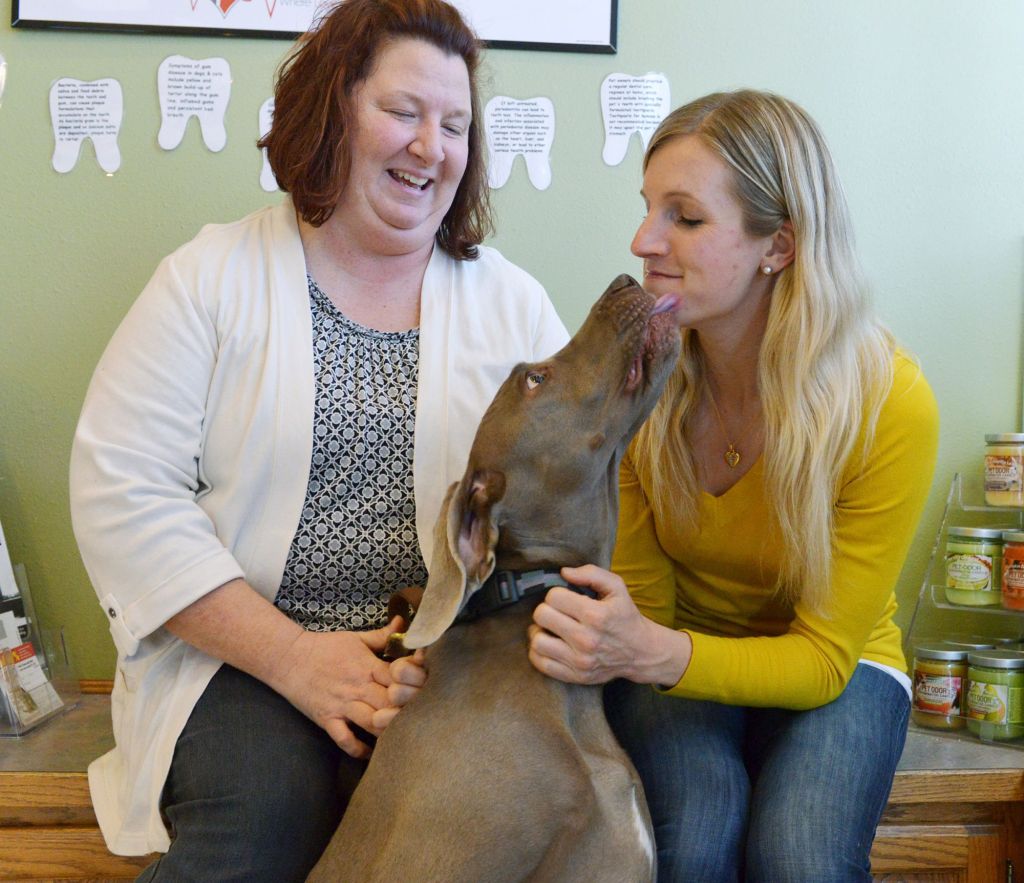 JOPLIN, Mo. (AP) — Carolyn Mueller is both a dog lover and a storyteller.
So when she got the opportunity to write a story about a Joplin dog named Lily who helped search for survivors after the May 2011 tornado, she jumped on it.
“Dogs like Lily can be heroes, too,” she said.
Mueller, a St. Louis author and zookeeper, has written a children’s book based on Lily’s experiences as a search-and-rescue dog. She was in Joplin on Tuesday to meet with Lily and her owners, and to plan some events to coincide with the April release of her book, “Lily: A True Story of Courage and the Joplin Tornado,” The Joplin Globe reported (http://bit.ly/1c32ykT ).
Lily, a 6-year-old Weimaraner, was adopted several years ago by Tara and Jeff Prosser, of south Joplin, and soon underwent training to become a rescue dog. She eventually joined the Newton County Rescue and Recovery Team, assisting with searches for missing people, drowning victims and evidence.
After the EF-5 tornado struck Joplin in May 2011, the Prossers brought Lily into the city to comb through large buildings along Range Line Road, including Wal-Mart and the Aldi grocery store, and the top floors of St. John’s Regional Medical Center. Lily later was put to work double- and triple-checking buildings for survivors or bodies because there were still people unaccounted for at that time.
In addition to fighting through the tornado’s aftermath, Lily has gone through battles of her own. She had been ill just before the tornado and eventually was diagnosed with a disease that affects her adrenal system.
Mueller’s book, targeted to children ages 8 through 12, aims to capture all those elements: Lily’s search-and-rescue efforts, her illness and her bravery after the tornado. Mueller said she kept the story child-friendly, even though it deals with serious subjects.
“We really wanted the message to be: ‘Bad things happen in life, but there’s always going to be those helpers (and) the ones who are going to make it OK,’” she said. “We didn’t want to make it depressing (or) something the kids wouldn’t want to read before bedtime.”
The book also has been adapted by Mueller into an eight-part series that is being published in newspapers across the state through the Missouri Press Association in conjunction with the annual Reading Across Missouri project. Each chapter is accompanied by an illustration from London artist Nick Hayes, who also illustrated Mueller’s book, as well as a guide of additional resources and related activity ideas for teachers and parents.
Nearly 90 Missouri newspapers, including the Globe, are running the serial story, said Dawn Kitchell, education services director for the Missouri Press Association. An additional 78 newspapers across 26 states are publishing the series through a partnership with the National Newspaper Association, she said.
Kitchell said the feedback she has received about the series has been positive, partly because most communities can relate to tragedy and partly because readers enjoy stories about dogs. A Virginia newspaper recently told her that the series was getting an “incredibly positive response” from teachers, she said.
“I think she (Mueller) has done a great job of capturing the tragedy of the Joplin tornado for young readers,” Kitchell said. “Lily dealt with death, and when you’re writing a book for children, you have to be sensitive to the language you use. Carolyn has done an outstanding job taking a difficult story and making it easy for kids to understand.”
Mueller said it was important to her to make Lily’s story understandable to children regardless of where they live. She pointed to last spring’s EF-5 tornado in Moore, Okla., and the Boston Marathon bombing as examples of events outside of Joplin that have had an impact on youngsters in those communities.
“Lots of things are scary for kids,” she said. “That’s what this book means to me — it’s some way to address those things with children because you can’t shelter them from it.”
Nearly three years after the tornado, Lily is living a quieter life. As of Jan. 1, she is retired from search-and-rescue missions. She now assists Tara Prosser in teaching weekly obedience classes at Main Street Pet Care, where she has been receiving treatment for her illness.

Prosser said she appreciates the interest in Lily’s story, even after all this time.
“To have somebody that wants to tell our story … we’re just as happy as we can be,” she said. “There’s never going to be another Lily. Having a book to commemorate her life that I can have even after she’s gone, I get teary-eyed about it.”
“Lily: A True Story of Courage and the Joplin Tornado” is set to be published in April by Reedy Press. It will be available for purchase online and in several local bookstores.