Across the Pond: Southern hospitality, British charm on display at Fulton Street bed and breakfast 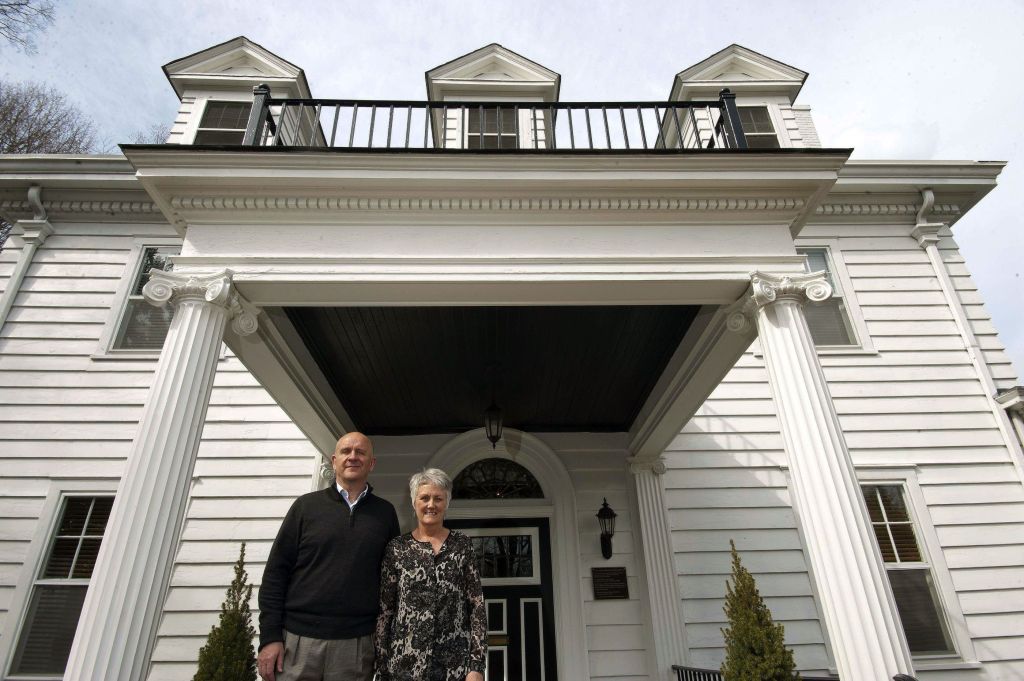 SALISBURY — With a combination of Southern hospitality and British charm, Andy and Mary Walker have opened a bed and breakfast in one of Salisbury’s finest homes and brought to life a pivotal structure that stood vacant for six years.

“We found the perfect owners in the Walkers,” said Brian Davis, executive director for Historic Salisbury Foundation, which sold the house to the English couple last year when they moved to Salisbury from Pittsburgh.

Transforming the 4,700-square-foot Stokes-Snider House at 324 N. Fulton St. into a bed and breakfast allowed the Walkers to purchase the house they fell in love with. They created an income-producing property during a six-month renovation designed to embrace the home’s 95-year history and respect covenants on the property while giving Across the Pond a fresh, contemporary feel with the modern amenities guests expect.

“Developing it into a bed and breakfast showcases not only the house but also their business to visitors to the city,” Davis said. “Since they are recently retired and this is such a large house, for it to become a bed and breakfast really made sense.”

Mary, 60, a teacher, and Andrew, 58, a civil engineer, had planned to downsize in retirement. They abandoned that intention a year ago when they stepped inside the Colonial Revival house built in 1919 by Dr. J. Edgar Stokes, the resident surgeon at Salisbury’s first hospital, and lived in for 59 years by the prominent Snider family, which donated the home to Historic Salisbury Foundation.

“We both looked at each other…” Mary said.

The Walkers, who became U.S. citizens after the Sept. 11 terrorist attacks, had never operated an inn. But they became superb hosts as Andy’s job took them to Toronto, Cypress, Pakistan and Cairo and they welcomed friends and relatives into their home on four continents. Guests often referred to the Walkers’ home as a “bed and breakfast.”

The Walkers, who settled in Pittsburgh for 24 years after their first son was born, had vacationed in Asheville several times. Tired of Pennsylvania winters, they started their search for a place to retire in the North Carolina mountains. But prices proved too steep and they cast a wider net, looking online for historic homes in the Piedmont.

They contacted local real estate agent Greg Rapp, who showed them seven properties on a single day in March 2013, including the Stokes-Snider House. They bought the home in July, paying $260,000.

Salisbury fit their criteria for a retirement town — walkable, plenty of locally owned restaurants and bars, several museums and theaters, live music and a local newspaper and coffee shop.

“We wanted to feel like we were part of a community,” Mary said.

The Walkers already speak with authority about Salisbury. They are not only well-versed in local entertainment and dining options, which they are eager to share with guests, but also have become burgeoning experts on the city’s history as culled from research and time spent with new friends in the historic districts. The couple has studied the storied past of the Stokes-Snider House in detail and can recite the family trees of previous owners almost as easily as their own genealogy.

Earlier this month, they received a letter from Britt Snider, 69, who grew up in the house and revealed that the sunroom, with its original terrazzo floor, was added in the 1960s and featured an antique billiard table moved from his grandmother’s home at 315 W. Horah St. A “full English” has replaced billiards as the lure to the sunroom, where guests dine on a traditional breakfast of eggs, bacon, sausage, beans, tomatoes, mushrooms and toast.

After seeing photos of the bed and breakfast online, “I love what you have done to the place,” Snider wrote. “It is also heartening to realize people are living there again.”

Snider’s sister Kay had intended to return to the house after her parents’ deaths, but she passed away in 2005. His twin brother, Arnie, also died recently.

Snider, who taught at the University of Cambridge in England in 1997, said he likes the idea of two transplanted Brits living in his family home.

“I couldn’t be more delighted,” he wrote.

Painstakingly renovated by Chad Vriesema and Central Piedmont Builders using local subcontractors, the home features four bedrooms, each with a private bath, as well as multiple furnaces and heat pumps to provide individual climate control. The Walkers declined to say how much they spent on the renovation.

Listed on the National Register of Historic Places, the house features unique craftsmanship including leaded glass, quarter-sawn oak floors, dentil molding, French doors, pocket doors and seven fireplaces. Inquisitive guests are treated to a tour of the expansive attic with three cedar-lined closets, as well as a peek at the unusual basement, where Andy finally identified the mysterious, cylindrical contraption as a central vacuum system after locating receptors in each room that led to the machine.

Dr. Stokes spared no expense when he built the house.

The Walkers literally uncovered the original date of home construction when they pulled down wallpaper in their bedroom and found the signatures of Laster Rahther and Carl Schreiber with the date, “August 1, 1919,” three years earlier than the previous estimated construction date of 1922. The men worked for W.E. Browne Decorating Company in Atlanta, the first full-service interior design firm in the country.

The Walkers framed the signatures and date on the original plaster wall, then painted the rest of the room.

Since Across the Pond opened in January, the Walkers have hosted four couples from Kentucky, San Francisco, Pittsburgh and Salisbury and a guest from Oregon. The inn was completely booked for Valentine’s Day.

They hope to have guests 50 percent of the time and believe they will attract three types of customers — locals who know the house, tourists who find the bed and breakfast online and corporations looking for a high-end option for out-of-town clients or executives.

Across the Pond joins two other bed and breakfasts — Rowan Oak at 208 S. Fulton St. and Turn of the Century at 529 S. Fulton St. — within eight blocks. The Walkers said they hope their unique background and Across the Pond’s contemporary feel will carve out a niche. They also have a partnership with Lee Street Theatre, which is within walking distance, and will offer ticket and room packages.

As they made the life-changing decision last year to buy the grand home and open a B&B, one question loomed — could Mary and Andy work side-by-side, nearly 24 hours a day, seven days a week? The president of a large geotechnical engineering company while the family lived in Pittsburgh, Andy was often away from home, including working for a year at the site of the World Trade Center after the terrorist attacks.

Now, they work and live in a small portion of the house and are together almost constantly. And they love it.

“We’re a good team,” said Mary, praising Andy as a quick study as he learns to change sheets and prepare a full English.

“She’s always been the love of my life,” he said. “We know each other very well.”

The Walkers plan to become even cozier, moving their bedroom into Dr. Stokes’ original medical office behind the main house, freeing up the master bedroom for use as a fourth guest room.

As they globe trotted in the 1980s, the Walkers collected books and art from around the world, which provide a treasure trove for guests at Across the Pond.

As a child, Andy saw Eric Clapton perform and became hooked on blues music, including Elvis Presley. His curiosity about who inspired the artists led to a discovery of African American musicians from the 1940s and 1950s, now featured in his extensive music collection and captured in images throughout the inn.

The Walkers became American citizens in 2003 after an arduous two-year naturalization process and have dual citizenship. Andy’s work at the trade center site served as a turning point for the couple, who had been considering citizenship for years.

“That really made us decide we need to become citizens,” Andy said. “This country has done so much for us, and now it’s under attack.”

An American flag flown over the U.S. Capitol in honor of the Walkers’ naturalization now has a place of honor in their library.

“It’s not something we did lightly,” Mary said. “In our mind it’s a real commitment, not just a piece of paper.”

Moving to Salisbury took nearly as much thought. Andy said he and Mary are aware of the city’s problems, including high unemployment.

“Salisbury is charming but still has a lot of challenges,” he said. “We didn’t come in blind.”

The Walkers said they hope Across the Pond will become an asset to the community, drawing visitors and tourists from out of town and introducing them to Salisbury and Rowan County.

The couple’s thoughtful renovation and attention to detail as business owners should prove successful, Davis said. Their decision to land in Salisbury speaks to what the community has done collectively for 50 years in saving important structures, he said.

“It’s a win-win for Salisbury and the Walkers,” Davis said. “I really think they are going to do well.”