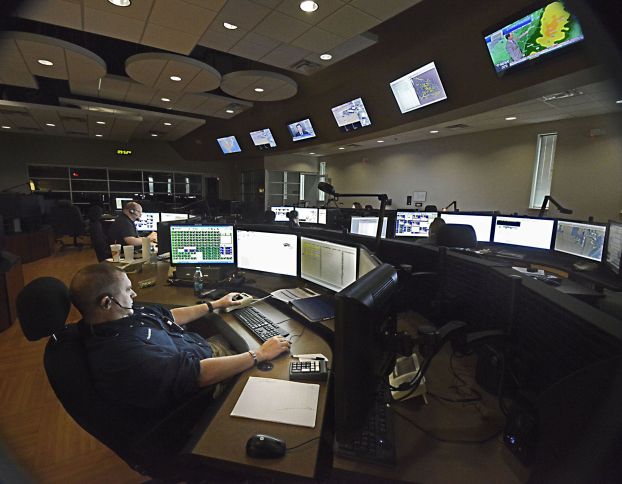 Any emergency services professional will acknowledge that in a life-saving situation, seconds truly count.
In Rowan County, two relatively new facilities aimed at reducing local response times and helping to serve a wider area of the county already are demonstrating results.
A state-of-the-art 911 telecommunications center at 1090 Corporate Center Dr. is centralizing emergency response more efficiently, and a new emergency medical services station on Statesville Boulevard in Cleveland is ensuring residents in the far western end of the county can rely on an ambulance in an emergency.
The 911 center, a project in the works since 2011, opened in October after telecommunications officials said they needed massive radio upgrades.
Formerly situated in the Rowan County courthouse, the county’s 911 center was only able to house six telecommunicator positions with no room to add any additional staff.
“We had two offices, a storage room, a 911 room and a small server room,” said Rob Robinson, director of county E-911 and telecommunications.
A dispatch center was built with the capacity to handle both the county and city telecommunicators along with room to grow.
“The other dispatch center had six (telecommunicators), and the city had four. We put 16 in the dispatch room, so there is plenty of room to grow,” Robinson said.
The center will be running with nine people at their computers when fully staffed, Robinson said.
City telecommunications staff soon will join with county staff in either March or April, Robinson said.
In the past, Robinson said Salisbury was considered a secondary “public safety answering point,” or PSAP.
“(Salisbury) was considered a secondary PSAP, which means all 911 calls inside Rowan County hit us first. We have to answer them,” Robinson said. “Once we answer them, if it’s not our call, we transfer them to a secondary PSAP.”
The transfer potentially can slow a call down from one minute to five minutes, Robinson said.
“It is not anybody’s fault. The way it was structured slowed things down. This will speed it up,” Robinson said.
The 911 center originally working out of the courthouse downtown needed more room, Robinson said.
The new facility on Corporate Center Drive features a large training room, showers, a kitchen, multiple redundancy measures for vital appliances and electronics, additional pods for telecommunicators in the 911 room as well as a meeting room.
Telecommunicators answering calls work in 12-hour shifts, and ergonomic keyboards and desks adjust, rise up and allow staff members to stand and type if they need to stretch out.
Robinson said the facility cost approximately $5.5 million, including equipment.
ggg

In the western part of the county, Rowan County’s new Station 88 is ensuring residents can rely on local paramedics instead of having to drive to hospitals outside county lines.
The new EMS center at 11130 Statesville Blvd. is next to the Cleveland Community Volunteer Fire Department and is the farthest west center in the county.
“Response times were elongated. In 2011, for the area this station covers, they ran 478 calls in this part of the county with an average response time of about 12 minutes,” said Lennie Cooper, county EMS division chief. “In 2012, that response time jumped to 17.38 minutes, but we only increased our call volume by about 100 calls.”
With the addition of Station 88, the positive results already are being tallied.
In the area Station 88’s ambulance serves, Cooper said there were 558 calls for service last year.
The closest EMS station, Station 84, is located at 3975 Statesville Blvd. at Hurley School Road — about five minutes to seven minutes away from the new station.
Cooper said those minutes essentially can be tacked on to the response time for emergencies in the western part of the county.
“Our joke is if you build it, they will call,” Cooper said. “We saw that happen in Atwell. When we put the station in Atwell, they were having one or two calls a day. Now, they are just as busy as everybody else because people realize they can dial 911 and can get someone there relatively quickly.”
Cooper said the facility cost approximately $186,000 with about $63,000 for technology. The ambulance cost about $126,000, Cooper said.
The station ultimately came in 13 percent to 14 percent under the overall budget.
“I don’t think we cut any corners,” Cooper said.
Rowan County Emergency Services Director Frank Thomason said Station 88 has been a goal for about seven years.
“One of the things we know is, before this station was here, we had a segment of the population west and northwest of here who used a private vehicle to go to the closest hospital when a medical emergency occurred,” Thomason said. “With the increased call volume we have seen since this station has been open, we feel very strongly that part of that is due to folks seeing they have an ambulance, facilities and capabilities right here at their back door and are calling 911 to get a paramedic response.”
Thomason said that shift is for the best because people ultimately will be getting better medical care than they would if trying to drive to a hospital.
Station 88 is the first phase of a two-phase operation, Thomason said.
The ultimate goal is to have a brick-and-mortar facility with the Cleveland Community Volunteer Fire Department, which will be built in the future at a time Thomason said is yet to be determined.
“(Station 88) was built as a modular commercial structure. The garage is built to be deconstructed, picked up and moved to another location in the county,” Thomason said. “The timeline is up in the air, but we most likely will address a need somewhere else in the county based on call volumes and needs.”

SALISBURY — A Novant Health executive said Obamacare has the potential to dramatically decrease the uninsured ranks, but not as... read more