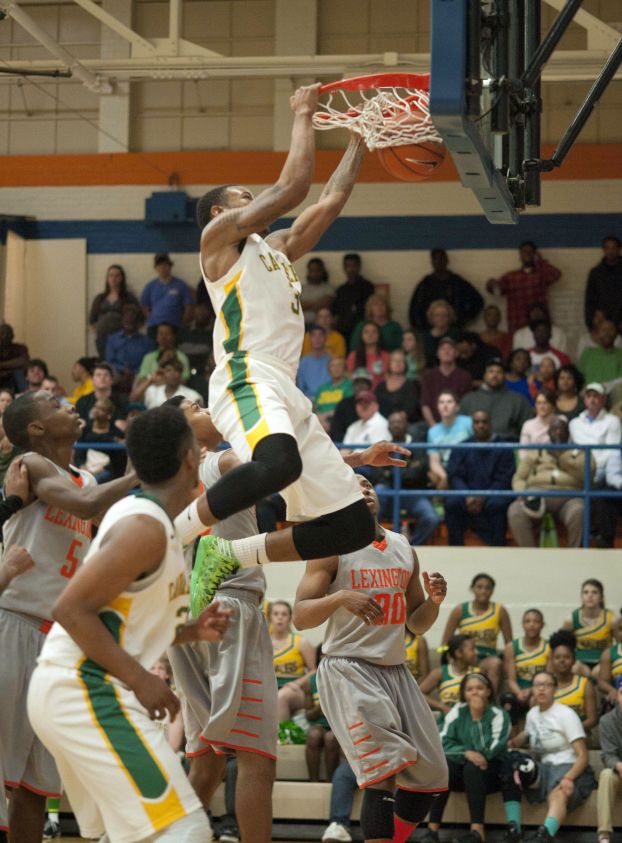 LEXINGTON — It was Standing Room Only in the Lexington gym on Friday for the CCC tournament final, but North Rowan senior Kenyon Tatum did his part to relieve the overcrowding.
Tatum’s powerful dunk to end the third quarter pushed the Cavaliers’ lead to 25 points and sent a few dozen Lexington supporters to the exits.
What was expected to be a tight battle for the league’s No. 1 seed for the 2A playoffs really wasn’t. North settled the championship early and overwhelmed Lexington 78-56.
Lexington is good. On this night, at least, North was considerably better. Lexington had surprised the Cavaliers 78-76 on the same floor on Jan. 31, but there would be no repeat of that.
“We were pumped,” North coach Andrew Mitchell said. “Lexington has four all-conference players, and playing on their floor, we knew we had better play hard. The deck was stacked against us, but we were motivated and we had an amazing effort.”
The dominance of Tatum and Michael Bowman on the glass (with some help from Dalton Nelson) was the biggest key to the romp. If North missed, it got the rebound. And if it missed its second shot, it got a third one.
Michael Bowman, Michael Connor and Jalen Sanders combined for 51 points and threatened to break world records for and-ones. Josh Handy chipped in with two 3-pointers. Joseph Scott was productive off the bench.
“It was a payback thing for all of us,” Bowman said. “We needed this game, and I thought our bench was a big key. I was proud of all those guys. We got a lot of energy from those guys.”
No one provided more energy than the soaring 6-foot-4 Tatum. North’s lead was only 24-21 when Tatum smashed the first of his three dunks in the second quarter. North used that as the spark to take a 34-28 halftime lead.
“Kenyon dunks like that, and you feel ecstatic,” Bowman said. “It gives you great momentum.”
That late second-quarter momentum carried over to North’s devastating third quarter in which it tripled the tournament hosts 27-9.
While the All-CCC team won’t be revealed until after the season, Mitchell is a master motivator and he broke the news to Tatum that he’d been snubbed for that squad. Tatum was ready to eat raw meat by the time he got to Lexington (17-6), and each of his dunks carried with it frustration and elation.
“I don’t think I got any respect,” Tatum said. “I came to get some. And starting with that first dunk, we took over.”
North (16-5) led by as many as 29 points early in the fourth quarter, although an impressive scoring burst by Jakishe Page down the stretch kept things from getting completely out of hand.
All the Cavaliers were pleased with an effort that gave the program its fourth straight tourney title. North has been a conference regular-season champ or co-champ five years in a row.
“We were real flat last time we came over here,” Sanders said. “Lexington challenged us that night, and we didn’t step up to that challenge. Tonight was different. Our big guys were amazing.”
Unranked all season, North goes into the playoffs still under the radar of most but with a chance to make noise if Friday’s intensity carries over.
“When we played Lexington the first time here, we made 28 turnovers and missed 20 free throws,” Mitchell said. “We watched film of that, and the guys are determined never to look like that again. We played hard every possession tonight, and if we can do that, this team can be good. I don’t just feel like we can do something in the playoffs, I can smell it.”