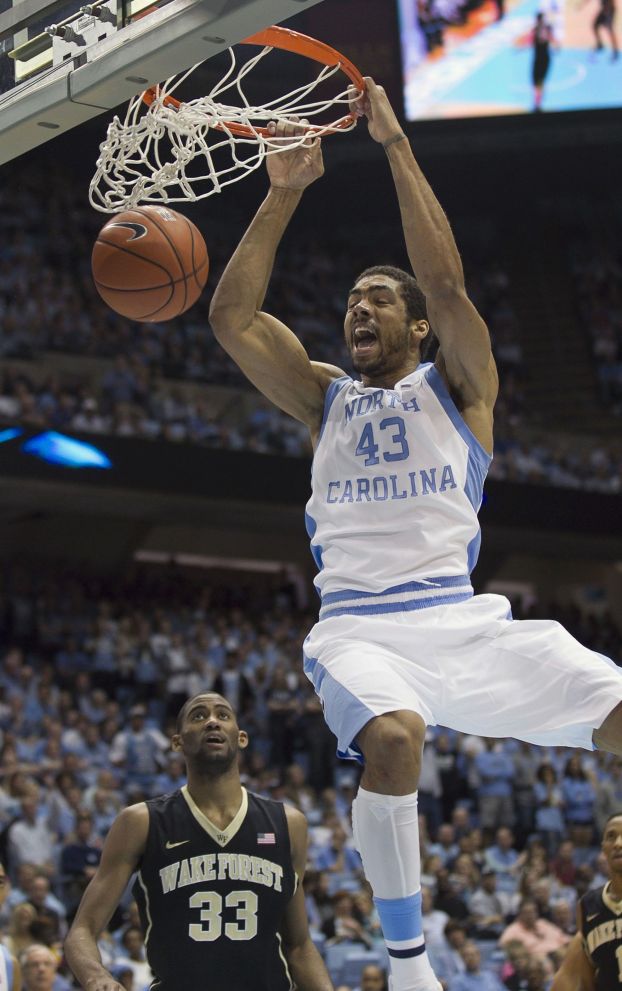 CHAPEL HILL — North Carolina didn’t let a crammed-full schedule of games nor a short turnaround after an emotional win against its fiercest rival derail its momentum. Instead, the Tar Heels had a dominating performance that continued their upward surge in the Atlantic Coast Conference standings.
Leslie McDonald scored 19 points to help North Carolina beat Wake Forest 105-72 on Saturday, capping a stretch of four games in eight days that included an emotional win against No. 5 Duke in a game that ended about 36 hours earlier.
Freshman Kennedy Meeks added 15 points for the Tar Heels (20-7, 10-4 ACC), who had no shortage of positives. They had their best scoring output of the year, had six players in double figures, set a program single-game record for best 3-point percentage — even had a walk-on who hadn’t scored all year knocking down two 3-pointers late to fire up the home crowd.
“We understand that we had a chance to maybe get a day or two to get our bodies back together after this game,” said sophomore Marcus Paige, who scored 13 while playing a season-low 28 minutes. “But we had to complete the streak. Coach always said it’s not special to go four games in eight days unless you win all four of them.”
The Tar Heels started 0-3 in the ACC, including last month’s 73-67 loss at Wake Forest. But they’ve regrouped to reach 20 wins for the 41st time in 44 seasons.
On Thursday night, UNC rallied from 11 down after halftime to beat the Blue Devils 74-66 in a game postponed eight days due to a winter storm. They didn’t have any trouble with the struggling Demon Deacons (14-13, 4-10), shooting 53 percent to build a 19-point halftime lead that never got below 13 points again.
It marked only the third time in 86 games that the Tar Heels scored 100 points, which fittingly came on seldom-used reserve Wade Moody’s second 3 with 2:06 left.
Coach Roy Williams said the message to his team before this one was to be strong enough mentally to play well.
“That’s all we talked about: just it’s what it is, let’s go play, let’s not worry about it, let’s not make excuses,” Williams said. “You did have a big win but this game here today is just as important as Thursday night.”
North Carolina — sporting throwback 1980s uniforms — finished the game shooting 57 percent and even reversed its season-long struggles at the line by making 24 of 29 free throws, including their first 11 to give them 21 straight makes dating to the final 6 minutes of the Duke win. The Tar Heels also finished 11-for-15 from 3-point range.
UNC had season-best totals for made 3s and free-throw percentage (82.8), while the 73.3 percent from behind the arc was a program record for a game with at least 10 made 3s.
McDonald, a fifth-year senior, had two straight 1-for-8 outings before finishing with a season-high 21 points on 9-for-12 shooting against Duke. He made 5 of 6 from 3-point range Saturday in the best two-game scoring run of his career.
Coron Williams scored a season-high 19 points for Wake Forest, which is fading fast in what could be a make-or-break season for fourth-year coach Jeff Bzdelik.
Leading scorer Codi Miller-McIntyre, who came in averaging 14.1 points, went scoreless on 0-for-7 shooting while battling a lingering ankle injury.
The Demon Deacons have lost seven straight to derail a once-promising season, the program’s worst skid since losing 11 straight in Bzdelik’s first year.
“We’ve got to steer this train in the right direction,” Williams said. “Right now, it’s going in the wrong direction.”
Wake Forest shot 49 percent but made just 12 of 22 free throws and never slowed the Tar Heels, prompting Bzdelik to say his team’s defensive intensity was “back in Winston-Salem” on campus.
“It’s at a point where we need to get over it,” Miller-McIntyre said. “If we don’t, we’re going to keep feeling like this after every single game. We can’t sit here and keep feeling sorry for ourselves, and I can’t sit here and keep blaming an injury. I’ve got to man up. … We’ve all got to come out with more passion and more energy.”