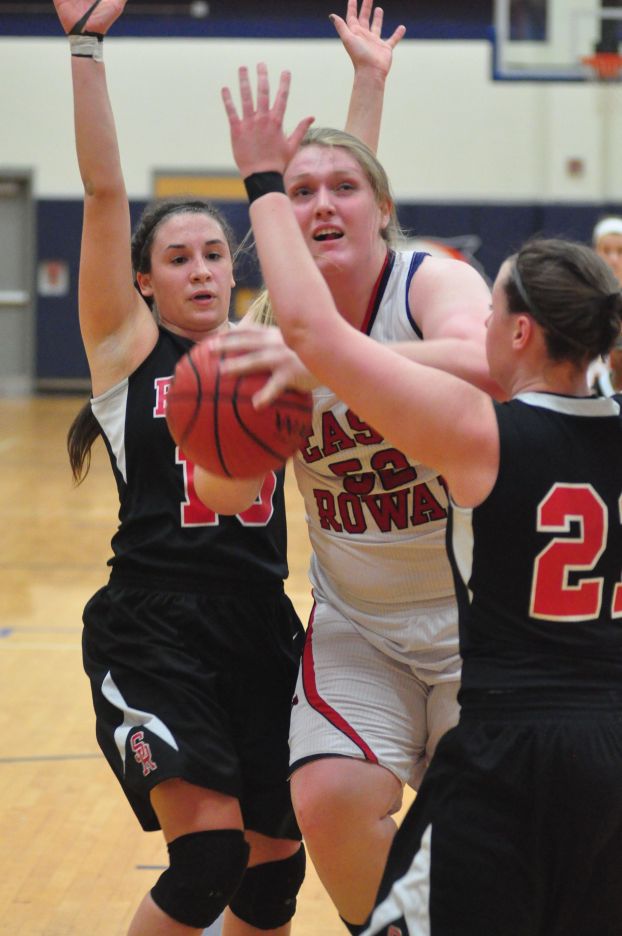 CHINA GROVE — East Rowan ended 15 years of frustration in style Friday night.
The Mustangs rolled over fierce rival South Rowan 62-41 in the Southern Piedmont Conference championship game to, not only capture the program’s first tournament title since 1999, but complete a clean sweep of the league championships.
“It feels awesome,” a beaming East head coach Danielle Porter said. “We’ve been in the trenches. But they’ve worked so hard, and to see it pay off, it kind of gives you a new spirit in the competition of this generation.”
“This is wonderful,” senior Karleigh Wike added. “We worked hard for this for four years.
“I knew I would be emotional either way, but thank goodness it’s the happy emotions.”
The Mustangs dominated from the opening tip and never looked back.
Wike and Kelli Fisher combined for 12 points in the post in the first quarter as East out-scored the Raiders 14-2.
The Mustangs scored 21 of the first 23 points and held South without a field goal for the first 11 minutes of the game.
“It was South Rowan and the tournament championship — we were ready to go,” Porter said. “We had a real specific game plan and the girls really took to it. Our motto all year has been to let our defense create offense, and that’s what happened. They say defense wins championships.”
That smothering defense limited South to just nine first-half points, while shutting down Avery Locklear and Cassidy Chipman, the top two scorers in the SPC.
East led 29-9 at the break.
“It was tough. We started off terribly on offense and they made life tough for us,” Raider coach Jarrod Smith said. “You have to put the ball in the net.”
South finally started doing that in the third to ignite a furious comeback.
Chipman found her groove and led the charge. The junior stole the ball and hit a pair of free throws. She then swiped another pass and buried a pull-up trey to bring the Raiders all the way back to 10 at 35-25.
East’s once-comfortable lead was down to nine (37-28) heading to the fourth.
But the Mustangs flexed their collective muscles in the final frame ice the game.
Jocelyn Lowe knocked down 9-of-10 free throws in the final 3:51 and East poured in 25 points in the quarter to put it away.
Once the final horn sounded, the Mustangs rushed to midcourt to celebrate.
“I was just so proud,” Porter said. “This isn’t a group that just came out here and won a ballgame with God-given gifts. They are self-made and have worked so hard to be able to do this. To see that all pay off as a coach is priceless.
“The stars have really been aligned for us this year,” she continued. “We have every position and every need covered. We talked about all year that if we were going to make a run, this was a good year to do it.”
“I just couldn’t believe it,” Wike, who finished with 20 points and 17 rebounds, chimed in. “All the hours we spent in the gym together paid off.
“Winning the championship meant the world to everyone,” she added. “And beating South was just a plus.”