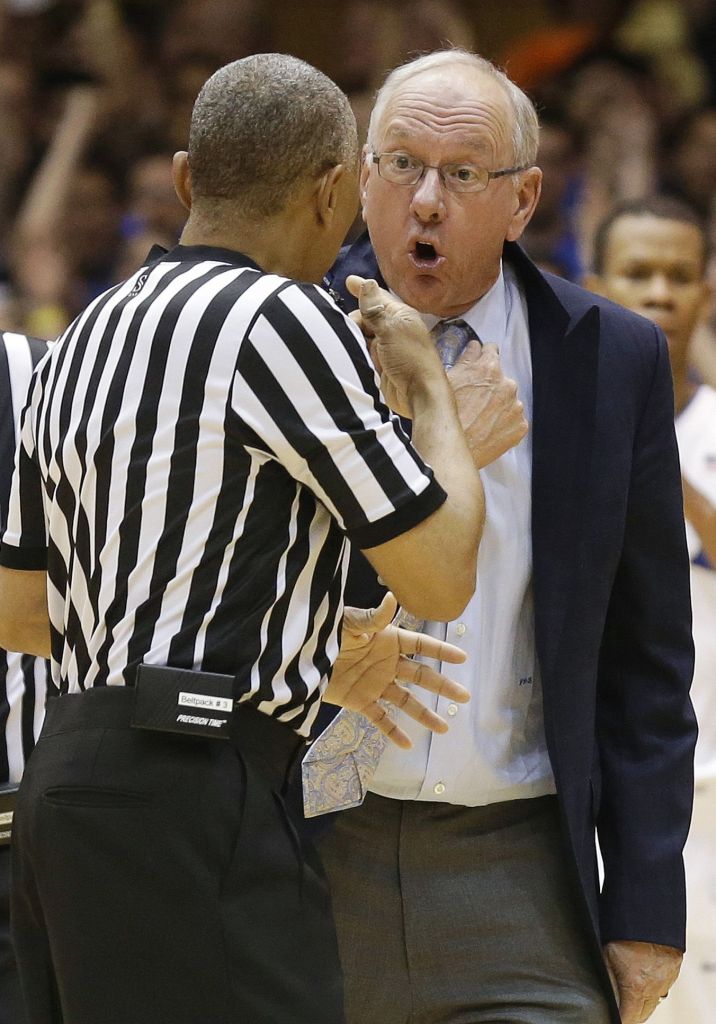 DURHAM, — They’ll remember the OT from the first Syracuse-Duke game — and the Ts that decided Round 2.
The rematch of one of college basketball’s best games of the season ended with Hall of Fame coach Jim Boeheim ejected after he charged onto the court to argue a block/charge call.
Rodney Hood scored 13 points and drew that game-changing charging call, which helped No. 5 Duke beat No. 1 Syracuse 66-60 on Saturday night.
“I just thought that was the worst call of the year, that’s all,” Boeheim said. “I hated to see the game decided on that call.”
Freshman Jabari Parker had 19 points and 10 rebounds for the Blue Devils (22-6, 11-4 Atlantic Coast Conference).
Jerami Grant had 17 points and C.J. Fair, the player who was called for the charge, finished with 13 for the Orange (25-2, 12-2).
The first meeting between these teams was an overtime game considered an instant classic and won by Syracuse. The rematch was just as close but it will be remembered more for Boeheim’s exit with about 10 seconds to play.
“Both teams were worthy of winning this game, and both teams were worthy of winning up there,” Duke coach Mike Krzyzewski said. “So going 1-1 was probably the way it should be.”
Syracuse had the ball down 60-58 when Fair drove for an apparent tying layup.
But official Tony Greene whistled Fair for charging — and Boeheim shot onto the court to argue. Greene slapped him with two technical fouls and ejected him.
“People will remember this one for 30 years because the old coach went out there and got a little excited,” Boeheim said. “I think the fans will remember Jim Boeheim down here. Two great games.”
Quinn Cook iced it by hitting three free throws with 10.4 seconds left to make it 63-58.
That helped the Blue Devils bounce back from a loss to hated rival North Carolina less than 48 hours earlier. It meant they avoided their first regular-season losing streak since 2009 and it extended their winning streak at Cameron Indoor Stadium to 31 games.
“That’s the way it’s going to be in the ACC tournament and then the NCAA,” Parker said. “We’ve got to play back-to-back competitive games, but I think we’re going to get used to it.”
Meanwhile, the Orange — whose 25-0 start was spoiled three nights earlier by an overtime loss at home to sub-.500 Boston College — are the first top-ranked team to lose twice in a week since Texas in 2010.
“I don’t think we’ll probably play anymore,” Boeheim said, his words laced with sarcasm. “I think we’ll just give up.”
It was Duke’s ninth win over a No. 1-ranked team and first since 1997.
Star freshman Tyler Ennis finished with nine points on 2-of-13 shooting and he and fellow starting guard Trevor Cooney combined to miss all five of their 3-point attempts for the Orange.
Three times in the final 90 seconds, they had the ball down by three or fewer points — but all anyone will remember is that drive by Fair.
He blew past Tyler Thornton along the left baseline and — as Hood slid over to cut him off — he flipped up a shot that banked in. Greene blew his whistle and waved it off to call Fair for charging.
“Regardless of whether they called a block or a charge, I was going to be there and help Tyler out,” Hood said. “I honestly didn’t know (what the call would be). … I thought I was there the whole time, but you never know.”
That brought an incensed Boeheim off the bench and well onto the court to argue.
Once he was tossed, the game was effectively over.
“I think maybe (if) we didn’t get the techs, we probably still had a chance to win,” Fair said.
This one always seemed destined for a tight finish, even after Duke appeared to take control down the stretch.
The Blue Devils scored on six consecutive possessions, keyed by Cook’s 3-pointer that pushed the lead to 53-47 with just under 7 minutes left.
Three trips later, Parker soared to dunk the rebound of Hood’s missed 3 — which restored the Blue Devils’ six-point lead and sent the Cameron Crazies into earsplitting delirium.
But Ennis followed with a layup and Grant hit a jumper in transition, and things stayed tight until those technical fouls.
The game again matched the two winningest men’s coaches in Division I history in Hall of Famers Krzyzewski and Boeheim — who, by the end of the night, combined for 1,924 victories.
Round 1 went to Boeheim earlier this month in a game for the ages, with the Orange claiming a 91-89 victory in overtime after Duke’s Rasheed Sulaimon hit a buzzer-beating, tying 3 at the end of regulation before 35,446 fans at the Carrier Dome.
There were about one-quarter of that many at 9,314-seat Cameron — but the 74-year-old building rocked all night with a ferocity usually reserved for the annual visit from North Carolina.
“Another great game. Different from the first one because it seemed like both teams were scoring easy up in Syracuse, and today it was really difficult to score,” Krzyzewski said. “I don’t know how either team could play any harder.”
And from the opening tip, this one felt like a continuation of that OT thriller — with players from both sides turning in highlight-reel plays, from Marshall Plumlee’s vicious dunk of a missed 3 by Sulaimon, to Ennis’ emphatic block of a layup by Cook.
Syracuse maxed out its lead at nine on a 3-pointer by Duke transfer Michael Gbinije midway through the first half. The Blue Devils rallied to tie it at 26 at the break on Sulaimon’s fast-break layup with about a minute left, and it stayed tense the rest of the way.