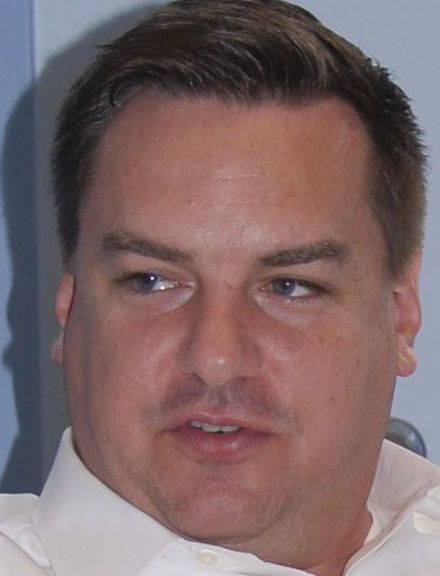 U.S. Rep. Richard Hudson said he is standing on his original campaign goal of being a congressman who reaches across the aisle while continuing to stand on his own principles.
Hudson, R-8th District, filed to retain his seat last week.
Looking to pursue a second term in office, Hudson visited the Salisbury Post on Thursday and spoke to the editorial staff regarding his aspirations if re-elected, problems facing Americans, the gridlock between polarized parties in Washington, D.C., and Democrats’ decisions he said are detrimental to the country’s future.
“In a divided government, I think you can’t get things done without working together,” Hudson said. “I didn’t run just to be a congressman, I ran to get things done.”
Last year, Hudson was one of 144 lawmakers in the U.S. House of Representatives who voted against ending the federal government shutdown.
“I’ll admit I was naďve when it came to the government shutdown, because I believed (U.S. Sen.) Harry Reid couldn’t get away with not talking to us,” Hudson said. “I thought what we were asking was pretty reasonable ­— that we give a one-year delay on the tax on individuals if they didn’t buy insurance this year, and that we don’t give Congress a special deal.”
The U.S. Senate “would not even sit down and talk with us,” Hudson said.
Hudson said Republicans appeared as “the bad guys” since Democrats refused to negotiate and the shutdown continued.
“One lesson I learned is that we need to avoid shutting down the government,” Hudson said. “That is not a good way to achieve our aims.”
If Hudson could have his way, he said he would scrap the new health care law and start over.
Since society is ultra-personalized nowadays, Hudson said, the “one-size-fits-all” health care approach is not the right solution for people.
“My hope is, now that the law is implemented and we’re seeing all the problems with it, there will be an appetite by the Democrats to start fixing some of these things,” Hudson said. “I was shocked – when we had the shutdown – that they weren’t even willing to talk about that. It’s just so unfair that you’re going to have to pay a tax because you didn’t buy a health care plan you didn’t want on a website that doesn’t work.”
In regard to immigration reform, Hudson said the country’s biggest problem is that it is easier to come across the border illegally and get a job than it is to do so legally and get a job.
The immigration system is broken, Hudson said, and the fixing involves getting the border under control, looking at internal enforcement as well as E-Verify — another system Hudson said doesn’t work.
“We need both the high-end visas and the skilled-worker visas. If you look at every industrialized country in the world, they give about 80 percent of their visas based on job skills. We give 12 percent,” Hudson said. “The rest are lottery or (for) family members. We need to give out visas based on the people we want to bring in, and that means doctors and scientists.”
The effort to raise the minimum wage is a “false issue,” Hudson said, and an effort by President Barack Obama to change subjects.
“It’s a red herring. Raising minimum wage decreases the number of jobs available,” Hudson said. “I’m interested more in jobs for everybody and more opportunities. We need some entry-level jobs for folks, but I don’t want people trapped in an entry-level job.”
When it comes to talks of extending unemployment benefits, Hudson said he is wrestling with the idea.
“Studies show that most people find a job in the last 60 days of their unemployment benefits regardless of how long they have been on it. The last 60 days is when everybody finds their job because there is the incentive to go find one,” Hudson said.
The question revolves around the nature of “true compassion,” Hudson said.
“Is it providing people with benefits or is it making sure we don’t trap people in a system of dependency,” Hudson said.
A safety net is crucial for certain people in society who truly need it, Hudson said, but it is immoral when that safety net becomes a hammock and a person’s incentive to work is taken away.
“We’re trapping people. We’re stealing their dignity. Do we extend unemployment insurance? It’s hard for me to say ‘Yes,’ ” Hudson said.
In North Carolina’s 8th District, Hudson said his main priority is creating new jobs following the significant losses of textile and furniture jobs over the years.
The federal government’s policies are putting a “wet blanket” on job creation, Hudson said, and the uncertainty and lack of faith in the government or brighter future is stopping people from hiring.
“When we have debates in Washington, I don’t talk about numbers and graphs and charts. I talk about real people back home and what they are really dealing with,” Hudson said. “This isn’t about this party or that party or scoring a political victory. This is about real people being hurt back here. It’s very personal for me.”
As of Thursday evening, the only challenger Hudson is facing so far is Antonio Blue — a Democrat from Hamlet.