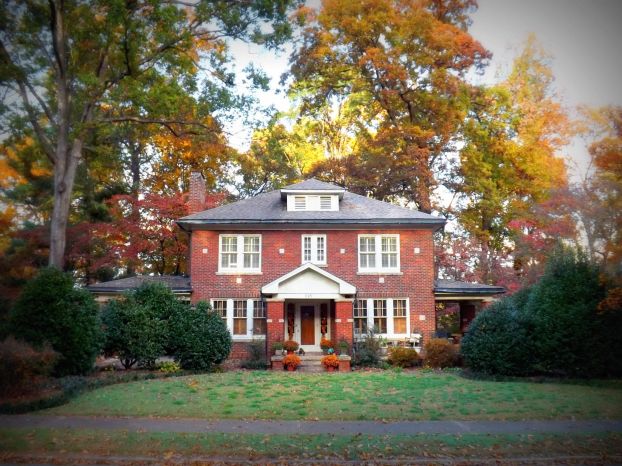 OctoberTour will expand into Fulton Heights this year

SALISBURY — OctoberTour will feature the Fulton Heights neighborhood this year as the home tour continues to expand beyond the West Square Historic District.
The tour, which for decades almost exclusively featured the grand homes in the West Square, expanded successfully last year into the Brooklyn South Square neighborhood.
This fall, the 39th annual OctoberTour will include seven homes in Fulton Heights. Already in the works for next year, the tour will expand into the Ellis Street Graded School Historic District.
The tour is Oct. 11 and 12.
“When I first started here, the one question everybody posed was how to get more people to put their houses in OctoberTour,” Historic Salisbury Foundation Executive Director Brian Davis said. “They kept asking the same people, in the West Square primarily, to have their houses on tour.”
So Davis expanded the tour into other neighborhoods, not only to give West Square homeowners a break but to showcase the architecture and character of Salisbury’s other national historic districts.
“It’s a great way to get people into neighborhoods that already have a lot of activity, but more needs to happen with revitalization,” Davis said.
Taking the tour into different neighborhoods highlights beautifully restored historic homes and also offers visitors a chance to notice unrestored, available properties. Many people who come to OctoberTour are looking for a home to restore, Davis said.
“Every neighborhood has buildings that can be improved, and it’s a great way to show people that hey, this neighborhood is up-and-coming,” he said.
Davis said the foundation is working to plan the home tour much further in advance. Homes for this year’s tour were chosen three months earlier than usual and will be announced soon, he said.
And homeowners in the Ellis neighborhood now have 20 months to restore a kitchen or renovate a bathroom if they would like to put their house on tour.
“This is better for planning and gives the tour new energy,” Davis said.
The Hall House and West Bank Street will continue to serve as the heart of OctoberTour with food, events and entertainment, regardless of which other neighborhoods participate. Trolleys will ferry people back and forth from Bank Street to Fulton Heights this year.
Leah Campion will serve as chairwoman for OctoberTour with support from Theresa Pitner as vice chairwoman.
One of the longest-standing historic home tours in North Carolina, OctoberTour has helped fund the Historic Salisbury Foundation’s efforts to protect more than 100 historic properties from demolition.
The foundation’s latest success story is the Fulton-Mock-Blackmer House, which it sold to Beth and Glenn Dixon for further renovation.
Campion is originally from Bay Village, Ohio and has lived in Salisbury since 2002. She has a bachelor’s degree in English from Randolph Macon Woman’s College, now Randolph College, and her husband Shawn Campion is president of Integro Technologies. They have two daughters.
The Campions purchased the 1909 Morris House in the West Square in 2011, completed extensive renovations and put the house on October Tour in 2012.
Leah Campion serves on the Board of Trustees for Historic Salisbury Foundation, the Salisbury Rowan Symphony Guild Board and is the first vice regent for the Elizabeth Maxwell Steele Chapter, DAR. She is an avid supporter and volunteer of Faithful Friends, Lee Street Theatre, Communities in Schools, Knox Middle School and Overton Elementary School PTAs and Piedmont Dance Theatre.
Campion’s get-it-done personality, mixed with her passion for historic preservation and improving Salisbury, will make this year’s OctoberTour special, Davis said.
Campion said after having her own house on tour and volunteering with the Oversight Committee and other aspects of the event, she has a great appreciation for the work that goes into planning and executing a successful OctoberTour.
Salisbury has many historic neighborhoods, each with its own character, Campion said, adding that she is happy to showcase a neighborhood not seen on tour before.
“Fulton Heights is such a family-centered neighborhood,” she said. “I envision an OctoberTour that can be enjoyed by all generations, where family members can enjoy great food, listen to music, take a ride on the trolley, and learn about the history that makes Salisbury such a special place.”
Pitner has the same zest for historic properties and love of Salisbury as Campion.
Pitner’s first home restoration was a 1940 English Cottage in Boise, Idaho. Theresa has lived in Fulton Heights for 13 years and “has loved every minute of it,” she said. She and her family completed renovations to their 1915 home at 618 Wiley Ave., which will be on the tour.
As Pitner puts it, she lives and breathes Fulton Heights and dogs. She is a board member of Fulton Heights Neighborhood Association and Faithful Friends Animal Sanctuary and chairwoman of Dog PAWs, Salisbury’s first dog park, coming soon.
Pitner works as the volunteer coordinator for Hospice & Palliative Care of Cabarrus County. She is married to Andrew Pitner and have one son and several dogs and a foster dog.
For more information on this year’s OctoberTour, go to www.octobertour.com or like the OctoberTour Facebook page to stay updated throughout the year.

Q&A with one of Salisbury Post’s new owners

Todd H. Carpenter, one of the new owners of the Salisbury Post, answered questions from a Post reporter about the... read more