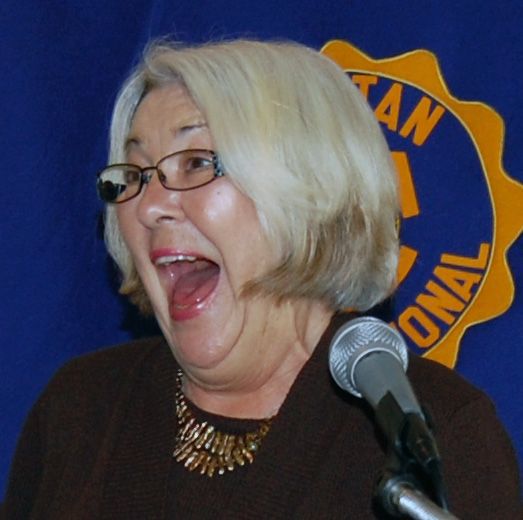 North Carolina Commissioner of Labor Cherie Berry encouraged business owners to take advantage of free consultations offered by the Department of Labor when she spoke Thursday at the Salisbury Civitan Club’s meeting.

Berry informed and entertained the Civitans as she explained what the Department of Labor does and the challenges it faces.

The main goals of the Civitans are fellowship, service and knowledge, so Frank Goodnight invited Berry to Thursday’s meeting to talk to the group about the Department of Labor’s role.

“The Department of Labor is not a department that people are very familiar with,” Berry said as she addressed the group.

Although her claim to fame is her picture inside each North Carolina elevator inspected by the Department of Labor, the commissioner and her department are responsible for much more.

According to Berry, who has served as the department’s leader for 13 years, its most important goal is to make sure “every worker goes home safe and healthy” each day in North Carolina.

“The Department of Labor touches just about every person in the state of North Carolina every day,” Berry said.

Berry said an inspector will come to a business and detail what needs to be fixed to remain in compliance with Occupational Safety and Health Administration standards.

Berry said she is the only elected official in North Carolina whose success or failure is based on “human lives and human limbs.”

Berry reported that North Carolina’s illness and injury rate has reached a record low, with fatalities down 30 percent last year to a total of 23.

“It’s not just a number to us,” she said, reminding the Civitans that the victims were fathers, husbands and friends.

The construction industry is where most illnesses, injuries and fatalities are seen.

Berry said 80 percent of occupational deaths are caused when an individual is struck or crushed by heavy equipment, falls from an elevation, is caught in between machinery or is electrocuted.

One of Berry’s primary challenges is the U.S. Occupational Safety and Health Administration.

“We’re a state plan state,” she said, explaining that instead of the national administration regulating workplace safety in North Carolina, the state has its own Occupational Safety and Health Administration.

Funding is supposed to be split evenly between federally and locally regulated states. However, locally controlled states only see about 30 percent of the funding, Berry said.

States that decide to do their own plan must be “as effective as” the federal organization.

How to measure what “as effective as” looks like isn’t clear, she said, and that can lead to demands from federal officials that don’t fit well with North Carolina’s culture and economy.

Berry says it frustrates her when the national department tries to control the way North Carolina runs its workplace safety division.

“They can hardly run their own,” she said.

One example she gave was how the federal Occupational Safety and Health Administration prescribes fines exponentially higher than North Carolina’s for workplace safety infractions.

Berry has refused to enforce the higher fines because she said they would bankrupt many small businesses throughout the state.

“We will continue to say ‘no’ to federal OSHA,” she said.

Most of Berry’s tenure has been served under a General Assembly controlled by Democrats. However, Berry, a Republican, says the most recent legislative session has been the most difficult.

The problems primarily stemmed from having “new people in the General Assembly and the desire to get a lot of things done quickly.” Berry said she and her staff spent “a lot of time putting out fires.”

Berry didn’t just bring the facts to the Salisbury Civitan Club. She easily mixed humor throughout the presentation.

When Goodnight introduced her, Berry said that he forgot the most important part of her introduction.

“He forgot to tell you that I am single and sexy!” she said.

As for who’s behind the account, Berry isn’t sure, but think’s it’s someone at the University of North Carolina at Chapel Hill.